The world's largest retailer recently announced that it would start buying used video games, giving customers gift cards in return. It will then begin selling those games in its more than 3,000 stores across the United States later this year. Wal-Mart's entry into the used-games business represents a big threat to the most profitable part of GameStop's business.

What this means for GameStop
In the third quarter, slightly less than 25% of GameStop's revenue was derived from pre-owned video game products. However, this category carries the highest gross margin for the company, more than double that of new video games and quadruple that of new video game hardware. The gross margin for pre-owned games is even higher than the "other" category, which includes digital downloads and mobile revenue. In other words, pre-owned games are GameStop's cash cow. 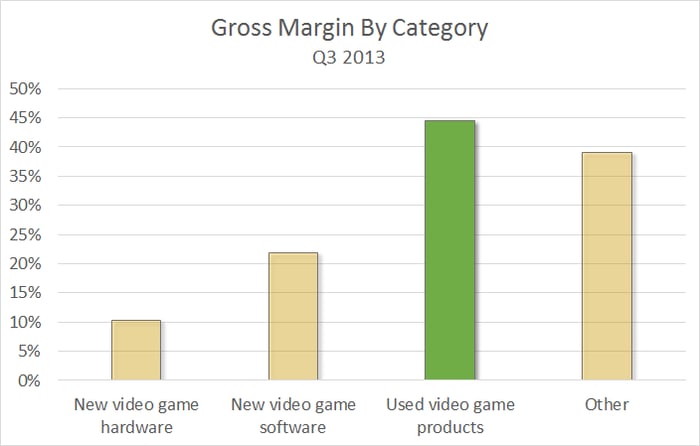 In fiscal 2012, GameStop sold more than $2.4 billion in pre-owned video game products. This included pre-owned hardware, but it's safe to say that GameStop controls a large portion of the roughly $2 billion used-game market. Nearly 45% of the company's gross profit came from used products during the year, and any blow to the used-game business will send earnings plummeting.

The release of PlayStation 4 and the Xbox One in November will skew GameStop's results for the current fiscal year toward new hardware and software. But the fact remains that used games are critical to GameStop's business model.

Wal-Mart poses a big threat to this business model, especially if it undercuts GameStop's prices on used games. There's no reason to believe that it won't -- it is Wal-Mart after all -- and this leaves GameStop in a difficult situation. In the third quarter, if the gross profit from used products was half of what it was, the company's operating profit would have been cut in half as well. Wal-Mart has stated that it plans to "pay more than anybody else" for used games, and that spells big trouble for GameStop's bottom line.

GameStop does have some advantages, though. The company operates a dedicated refurbishment center for used games and hardware, and this should make refurbishing damaged games more efficient and less expensive for GameStop compared to Wal-Mart. This may not single-handedly overcome Wal-Mart's pricing advantage, but it's certainly meaningful.

One thing to note is that Wal-Mart will only be selling used software whereas GameStop also refurbishes and sells used hardware; so at the very least that part of GameStop's business is safe.

What this means for Wal-Mart
Even if Wal-Mart steals away a majority of the used-games market, it's a drop in the bucket for a retailer that sells nearly a half a trillion dollars' worth of merchandise each year. You have to give credit to Wal-Mart for trying to break into new categories, though, and this is a trend that investors should celebrate.

Back in October, the company announced an iPad trade-in program where credit toward a new tablet would be received if an old tablet was traded in. The practice of only giving out credits or gift cards ensures that the money distributed is ultimately spent at Wal-Mart, and the used-game trade-in program will be no different. Some may balk at this, but the higher amounts paid for used games may be enough of a consolation.

While this won't have much of an effect on Wal-Mart's top or bottom lines, the company is clearly getting more serious about gaming; and a foray into digital distribution may be inevitable. This also threatens GameStop, as digital products also carry high margins, although the digital market is far more broad and competitive than the used-game market. Gaming is big business, and Wal-Mart wants a bigger piece of the pie.

The bottom line
GameStop has faced challenges to its used-game empire before, but Wal-Mart poses a very serious threat. Paying higher prices for used games and selling them for lower prices has the potential to destroy GameStop's margins, killing the company's most important source of profits. GameStop does have some advantages, including a dedicated refurbishment center and experience pricing used games, but GameStop investors should be very worried.