Not many stocks can boast of rising more than 450% in a single year. And when they do, it's generally a good idea to take profits. That said, biotechs that are on the cusp of transitioning from a developmental-stage company into a commercial operation can be unique exceptions. Put simply, developmental biotechs may linger for years as they burn through cash and operate at hefty losses, but suddenly rise in parabolic fashion once a lead clinical product nears regulatory review. Moreover, this rapid share price appreciation may be only the start of a long-term growth trend as the company turns the corner to profitability.

This could be the case for relatively unknown biotech Anacor Pharmaceuticals (NASDAQ: ANAC). Shares of Anacor have soared 464% in the past year, catalyzed by the submission of a New Drug Application for tavaborole to the Food and Drug Administration last July.  Tavaborole is indicated as a topical treatment for onychomycosis and is reportedly safer than Novartis AG's (NYSE:NVS) Lamisil and more effective than Valeant Pharmaceuticals' (NYSE:BHC) Penlac. Tavaborole's regulatory decision is expected on or before July 29, the drug's Prescription Drug User Fee Act target action date. 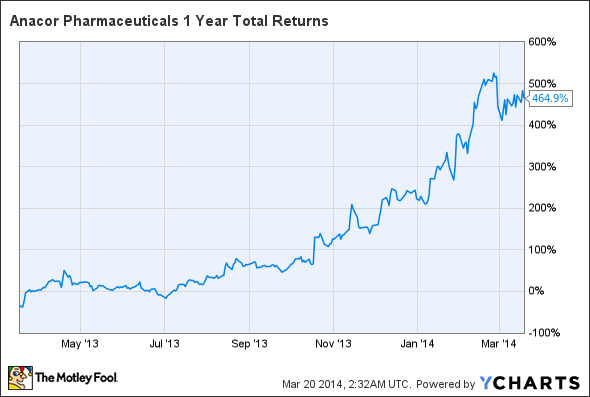 Anacor's long-term outlook
Given that high-flying biotechs often reverse course in a hurry, you should always consider how these companies will perform over long periods of time, in case the worst comes to pass. In Anacor's case, I believe there are a number of reasons to be optimistic.

Firstly, tavaborole looks like it will be given the green light by the FDA on or before July 29. I suspect this is the case because Anacor's management noted in a recent conference call that the FDA decided to forgo an advisory committee meeting after a mid-cycle review, which I take to mean that they didn't see any controversial issues with the drug's application. While that doesn't necessarily mean the drug will be approved, it's one less hurdle to approval.

Even so, my belief in tavaborole's approval really stems from the strength of its late-stage clinical trial results, where it easily met both its primary and secondary endpoints, without any serious adverse events occurring in either trial. That represents a major therapeutic advance compared to Novartis' and Valeant's product offerings.

Secondly, Anacor offers investors a favorable capital structure for a company heading into a potential commercial drug launch. The company exited 2013 with $166.8 million, derived mostly from a $142.5 million settlement with Valeant last October.  Although this probably isn't enough to fund both a commercial launch and a robust clinical pipeline, it's generally a better situation than most other developmental biotechs find themselves in prior to a commercial launch.

Finally, Anacor has a strong clinical pipeline headlined by AN2728, a topical anti-inflammatory indicated for the treatment of mild-to-moderate atopic dermatitis and psoriasis. After a successful meeting with the FDA, Anacor expects AN2728 to enter a pivotal late-stage trial within the next two months. In short, Anacor could have two commercially available products within the next two to three years.

Foolish wrap-up
Whenever a biotech shoots up like Anacor, my initial reaction is that it's time to lock in profits for investors that got in early. After a deeper look into Anacor, however, I believe the company is transitioning nicely from a risky developmental-stage company into a promising growth story. Although the commercial prospects of tavaborole are hard to predict because of the competitive landscape for onychomycosis, you should keep in mind that Anacor also doesn't have a comparatively high valuation at its current market cap of $885 million. Furthermore, Anacor has research deals in place with the Department of Defense, the Gates Foundation, and Eli Lilly that have been helping to cover the development of the company's other clinical candidates, and keep expenses under control. Overall, I think Anacor's days of hyper-growth are behind it, but the company looks attractive for investors with a long-term outlook.