It seems like no matter what's going on with macro trends and retail, you can always count on dollar store chains such as Dollar Tree (NASDAQ:DLTR) and Family Dollar Stores (NYSE:FDO.DL) as a bright spot and a niche that has been growing more popular than ever. With the results out from Dollar General (NYSE:DG), one metric in particular suggests that this company's growth is sustainable and it may still have a long way to go. 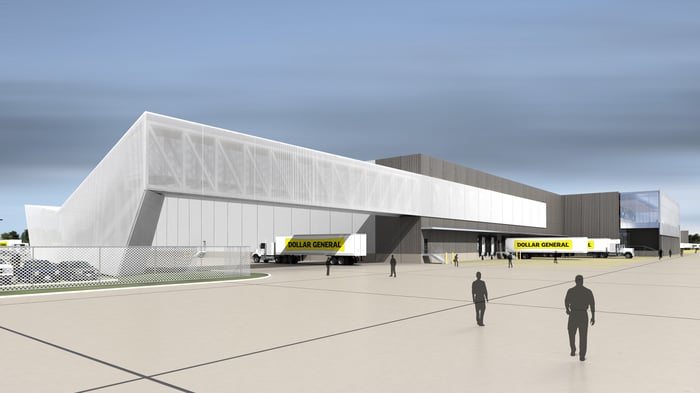 The General's state of the union
On March 13, Dollar General reported fiscal fourth-quarter results. Sales jumped 6.8% to $4.49 billion. Same-store sales tacked on 1.3%. Earnings per share popped 4% to $1.01. The company credited the success to increased sales from perishables and tobacco.

Unstoppable growth
Dollar General increased its store count by 6% in the last year alone to 11,132. Interestingly the stores still only operate in 40 states, which suggests that plenty more opportunities remain for further expansion. On top of the expansion that resulted from raising the store count, 2013 marked the 24th year in a row of same-store sales gains.

This means that Dollar General has prospered through three very painful recessions. Even during the great recessions of 1990-1991, 2000-2001, and 2008-2009 Dollar General saw positive same-store sales gains despite a crippled economy in each of those periods. This further suggests that while the bad economy may be a headwind for the company, it's far from a show-stopper. Dollar General has a long history of growth in any economic environment so it may still have a long way to go.

Aggressive competitive landscape
Perhaps competition poses the biggest threat to Dollar General's unbroken streak as certain areas finally become saturated with dollar stores. Although Dollar General isn't a pure dollar store since it sells many items for over $1, it is considered a direct competitor to Family Dollar Stores and Dollar Tree, both of which see opportunity ahead.

Family Dollar Stores did look weaker last quarter with same-store sales down 2.8%, but overall revenue popped 3.2% due to the effect of opening new stores. The company sees "ample growth opportunity" ahead and plans to add 6.5% more stores in 2014. The more Family Dollar Stores expands, the more of a threat it could become to Dollar General, though it would be hard to bet against a track record of 24 years in a row of same-store sales gains.

Dollar Tree is doing much better than Family Dollar Stores when it comes to growth. Last quarter it saw revenue jump 4.7% and same-store sales inch up 1.2%. CFO Kevin Wampler pointed out that the six fewer shopping days this past year between Thanksgiving and Christmas hurt dollar stores. Perhaps this resulted in less time for temptation to grab extra stocking stuffers.

Though Dollar Tree hasn't quite hit its 24th year in a row of positive same-store sales, the company did hit its 23rd quarter in a row of growth last quarter. Dollar Tree plans to expand its total retail space, which it will mostly accomplish by adding more locations. It plans to increase its location count by between 6% and 7% next quarter, in line with plans from Family Dollar Stores and Dollar General.

Foolish final thoughts
While competition is a concern over the long term, for now Dollar General is growing its store count at the same rate, in percentage terms, as the other guys. No evidence of cannibalization or any other struggles seems apparent yet. Expect to see 2014 become the 25th year in a row of positive same-store sales gains for the company. With a P/E ratio of 16 using analysts' estimates for this fiscal year, Dollar General represents a compelling growth and value play that deserves a closer look by Fools.