The big banks are expected to raise their dividends this year once stress-test results come back, and Bank of America (NYSE:BAC) and Citigroup (NYSE:C) are expected to post the most dramatic increases. Even with the projected 400% dividend raise, both banks would have yields that pale in comparison to what they were paying out before the financial crisis, so why is it such a big deal? More important than the dividend increases themselves is what they will do for the market's perception of both companies, which can go a long way for investors.

According to financial information firm Markit, both Bank of America and Citigroup could each increase its quarterly dividend to five cents per share, a 400% increase from the current one-cent payout. Before you get too excited, realize both companies are still pretty far from being in the "income stock" category. The increase would raise B of A's annual yield to 1.2%, and with Citigroup's higher share price, the hike would result in a yield of just 0.4%.

On a historical basis, a five-cent payout is nowhere near where these companies' dividends once were. Citigroup paid $5.40 per share (split-adjusted) during every quarter in 2007, and Bank of America's quarterly dividend peaked at $0.64 per share before the crisis. At the peak, this translated to a yield of around 3%, which is a long way from where we're expected to get this year.

So cheap! Why doesn't the market like the big banks?
The market seems to have extremely low confidence in both banks, particularly Citigroup. Shares trade for about 90% of their tangible book value, and trade for just over eight times forward earnings. This is amazingly low considering Citigroup's earnings are expected to grow by 12% this year and 17% in 2015. These are among the lowest valuation metrics of any large-cap stock anywhere in the market, despite the company's above-average growth rates.

Although it is not quite as cheap as Citigroup, Bank of America trades at a price-to-TBV of about 1.3, which is still very low relative to its historic valuation. B of A is actually projected to grow its earnings even quicker than Citigroup, by 47% this year and 23% in 2015. 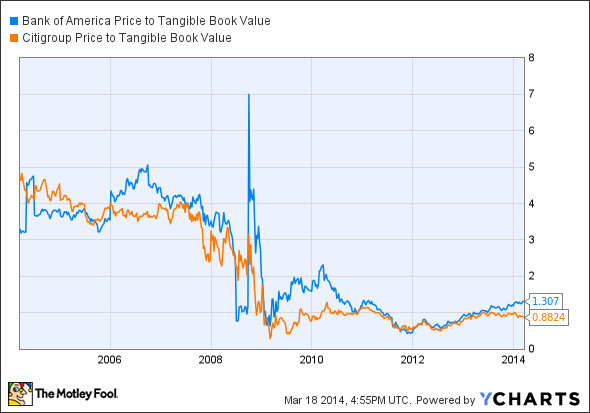 In a nutshell, the market doesn't seem to think too highly of these stocks, and it certainly has its reasons. Citigroup has tremendous international exposure, which is seen as very risky, and the company is still trying to unwind its bad assets leftovers from before the crisis. Bank of America seems to be facing constant litigation, mostly related to its acquisition of Countrywide, and it was just recently announced that the company may be on the hook for another $2.1 billion.

It's all about creating confidence
What the stress test results, and ensuing dividend hikes and authorized buybacks will do is give the market a giant shot of confidence in these two banks. For investors, this could have a double effect. The growing earnings and improving asset quality should raise the tangible book value of the banks, and the increased level of confidence that will come from the stress test results should help to increase the valuation that the market gives these banks.

As the banks make progress in their strength and stability, we'll see more authorized dividend increases, and a corresponding increase in market confidence each time. In short, these stress tests will give the market a reason to love these banks again, so you should get in before the market changes its mind.