Every March, Americans throw thousands of hard-earned dollars into March Madness bracket competitions. 99% of these players will never see that money again. There's a better way to invest in March Madness: buy stock from sports apparel companies that supply NCAA basketball players with the apparel they need to win on game day. If you'd invested $50 in the two winningest sports apparel companies last March ($25 in each), this year you'd have $95 to buy basketball tickets with—instead of no money and a losing bracket. 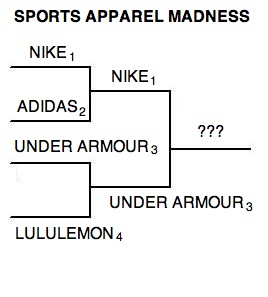 There's a reason that Nike and Adidas sponsor NCAA basketball and other college sports: it's a winning investment. While the controversy about underpaid college athletes unfolds, Nike and Adidas are raking in profits from free televised publicity and merchandising rights.

While a team sporting either Nike or Adidas' logo may win this year's March Madness, only one of these sports apparel companies appears to be a well-played investment to this Fool: Nike. Not only has Nike's stock risen 45.29% over the past year—an impressive move for such a long-established industry player—but the company also has plenty of runway ahead.

That means overseas growth, China in particular, where basketball and its accompanying American sports brands are starting to gather momentum. While Nike posted sluggish growth numbers for China for most of 2013, it's begun a comeback: despite a 3% first quarter sales decline in China, Nike posted up game-changing 5% annual growth in the second quarter.

And what about Adidas? The company may also benefit from the Chinese athletic footwear industry's 10% annual growth between 2013 and 2018, but Adidas plays like a poor sport. Last week, the German giant announced a lawsuit against up-and-comer Under Armour (NYSE:UAA), which likely won't help Adidas in its struggle to beat Nike's growth game.

Under Armour vs. LuluLemon
For spectators, March Madness' excitement comes from the dark horses, the smaller players that make unbelievable upsets. In sports apparel, Under Armour is the stock to watch here.

While neither Under Armour nor Lululemon (NASDAQ:LULU) will be sported by NCAA players on television this March, these brands are used ubiquitously by off-court athletes.

Under Armour brings high aspirations and an impressive growth story that may propel the synthetic sports apparel company to Nike's league. Adidas' lawsuit against Under Armour last week proves that this dark horse company poses a threat to the industry's Goliaths.

As the Washington Post notes, Under Armour eschews the high-fashion sports apparel trap, which could make the brand a short-term fad, in favor of sustained innovation and growth.

While yoga-posing women love Under Armour's trendy smaller-cap competitor, Lululemon, this company does seem at higher risk of becoming a passing fad. Lulu also made several on-court stumbles last year, including a yoga pants recall and insensitive remarks made by its CEO.

Lulu may make a half-time recovery, and its now-lower price may be worth the higher investment risk. Investors seeking a more stable growth sports stock should look toward Under Armour, though.

Foolish bottom line
In the sports apparel arena, Nike and Under Armour are playing smarter than Adidas and Lululemon. Whichever of these companies you bet on, it's a better investment than buying into a March Madness bracket tournament. Maybe by next March you'll double your money.