Investing in a gaming company is very much like betting your money in a casino. This is because gaming companies face a myriad of risks that are unique to the industry. Firstly, any downturn in the economy will reduce consumer spending and travel expenditures, and eventually put downward pressure on gaming revenue. Secondly, gaming is a highly regulated industry which faces many uncertainties, such as taxes and license suspension. Thirdly, most gaming companies face high risks with respect to both their operating and financial leverage. They tend to incur huge debt to build large casinos.

A Las Vegas proxy with a high non-gaming revenue contribution
MGM Resorts derived approximately 66% and 65% of its revenue and EBITDA from its U.S. operations in 2013, which makes it the best proxy for Las Vegas gaming growth among its peers. Recent industry data indicates strong growth prospects going forward.

According to data from the Las Vegas Convention and Visitors Authority, the number of visitors to Las Vegas in January 2014 grew 8.2% year-on-year, or yoy, which represented the highest growth rate since 2011. The average daily room rate increased 3.5% to $118.20, while occupancy expanded by 540 basis points to 83.5%. Strong growth from the meetings and convention industry provided a key contributing factor. In 2013, 5.1 million delegates attended a convention, trade show, or meeting in Las Vegas, which represented the highest convention attendance since 2008.

MGM Resorts is also the most diversified of its peers with respect to its non-gaming exposure. It generated about 27%, 23%, and 20% of its Las Vegas Strip revenue from room revenue, food and beverage sales, and entertainment and retail operations, respectively. The additional top-line contributions from conference attendees and entertainment-seeking customers helps offset any decline in gaming revenue.

Looking ahead, MGM Resorts should benefit from the positive outlook for the Las Vegas meetings and convention industry, given its high contributions from the Las Vegas Strip and non-gaming revenue.

A luxury player with strong financial discipline
Known as the pioneer of the integrated-resort concept, Wynn Resorts positions itself as a strong luxury brand. The strongest validation of successful premium positioning lies with attractiveness to foreign customers and Wynn Resorts performs well on this score.

Wynn Las Vegas leads the market in high-end international gaming with 25% market share; its international customers also tend to stay longer than usual at 3.6 nights, 10% longer than average. In addition, Wynn Resorts has stronger pricing power than its peers. Wynn Las Vegas' EBITDA per hotel room exceeds $100,000, which compares with $50,000 for peers like Las Vegas Sands and MGM Mirage.

Wynn Resorts also has a relatively strong balance sheet with cash and investments accounting for more than 10% of its market capitalization and a healthy net debt-to-EBITDA ratio of about two times. It also claims to be the "only major multi-national gaming operator to complete a project and not cancel or suspend a project during the recent economic downturn." A strong balance sheet gives Wynn Resorts the flexibility to capitalize on growth opportunities in good times and downside protection in difficult economic conditions.

Wynn Resorts' luxury branding puts the company in a good position to benefit from an increase in the number of high rollers who are looking for a premium gaming experience. On the other hand, its strong balance sheet helps to reduce its financial risks. 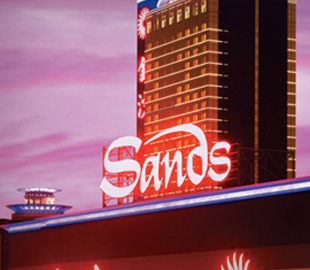 International exposure with good capital allocation practices
Las Vegas Sands offers the greatest international exposure of its peers, with about 90% of EBITDA generated outside the U.S. It also has exclusive access to Asia's fastest-growing consumer markets. Las Vegas Sands is one of only two operators which holds a license to operate in Singapore and one of six operators with a concession to operate in Macau. In Macau, Las Vegas Sands is the undisputed leader in mass tables and slot revenue with $1.4 billion of revenue in the most recent quarter. Las Vegas Sands isn't satisfied with its current geographical footprint and it has plans to expand to Japan, South Korea, and Vietnam in the future.

Gaming operators like Las Vegas Sands that return excess capital to shareholders, instead of splurging cash on excessive expansion, are preferred by investors. Las Vegas Sands has returned about $5.6 billion to shareholders through dividends and repurchases in the past two years. It has grown its dividend by more than 40% per year in 2012 and 2013 and it has committed to increase its dividend by at least a double-digit rate going forward. With respect to share buybacks, Las Vegas Sands has also provided guidance which states that it will purchase at least $75 million of stock each month.

Foolish final thoughts
Looking ahead, the outlook for all three gaming companies looks promising, despite their different areas of focus. More importantly, all three of them have adopted various strategies (non-gaming diversification, balance sheet strength, and capital allocation) to reduce their risk profiles. Of the three, I am placing my bet with Las Vegas Sands as it is the best proxy for international market growth and it has a shareholder-friendly capital allocation policy.