Dow Chemical (NYSE:DOW), the diversified chemical giant that has been in the news lately for its aggressive restructuring moves, has found favor with Citigroup. A couple of days back, the analyst firm upped its price target on Dow to $57 a share, which represents 14% upside from the stock's yesterday's close.

While I generally take analyst ratings with a grain of salt, I think investors have good reason to not only take Citigroup seriously, but even possibly expect something more from Dow Chemical than what the analyst firm projects.

The big cost advantage...
Citigroup is primarily betting on higher ethylene margins to propel Dow's growth in the near future. In fact, Citigroup also upgraded its price target on Dow's close competitor, LyondellBasell (NYSE:LYB), to $105 a share, backed by positive outlook for the ethylene side of Lyondell's business.

Ethylene is a key input for Dow's largest business of performance plastics, which contributed a quarter to the company's total revenue in 2013. What's interesting is that Dow is vertically integrated, and manufactures its own ethylene aside from some other raw materials. Here are two interesting facts that you should know:

The fall in natural gas prices in recent years proved a double boon since ethylene is derived either from natural-gas component ethane or from crude-oil derivative naphtha. The following chart from LyondellBasell's December presentation at the BAML Basic Materials Conference should give you an idea of how drastically ethylene production costs have come down over the past few years. 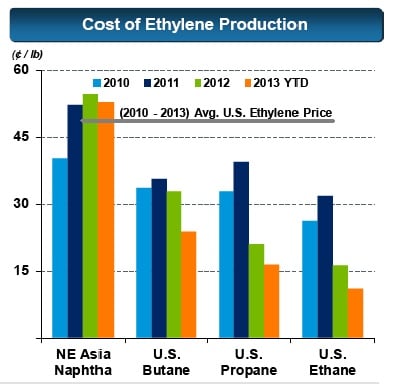 As you can see, the cost of producing ethylene from ethane has nearly halved since 2010, while that of naphtha has stabilized since 2011. The good news is that Dow is focused on exploiting opportunities at the ethane side of the equation, which explains Citigroup's optimism.

...that's pumping up Dow's margins
After restarting an ethylene cracker in Louisiana in 2012, Dow is setting up a new ethylene plant in Texas, which is expected to go online by 2017. Coincidently, ExxonMobil's new ethylene facility at Texas is also expected to be completed at around the same time as Dow's, and both plants will have an annual capacity of 1.5 million metric tons. Like Dow, ExxonMobil is leaving no stone unturned in exploiting favorable natural-gas-cost opportunities, and thus pumping more ethane feedstock to its crackers to produce greater amounts of low-cost ethylene.

The consensus view is that ethane supply will continue to outstrip demand over the next few years. To give you a better idea, take a look at this chart from a presentation given by energy market analytics company Bentek Energy at a Standard & Poor's conference held late last year. So with ample low-cost feedstock at their disposal, Dow and peers will not have to worry about increasing their plastics production capacities. The world's largest petrochemical facility currently being developed -- in Saudi Arabia, under Dow's joint venture with Saudi Aramco -- will also use a greater portion of ethane compared to naphtha to extract ethylene. The complex, which will primarily produce high-margin plastics products, is on track to start by mid-next year, with 45% of the work already complete.

We already have evidence of what low ethylene costs can do to Dow's margins -- despite flat sales, earnings before interest, taxes, depreciation, and amortization, or EBITDA, from the company's performance plastics division jumped to $4.5 billion in 2013 from just about $3 billion in 2012. The cost advantage is here to stay, given the robust supply of ethane and Dow's self-sufficiency in meeting most of its ethylene requirements. And this is exactly what Citigroup is banking on.

Foolish takeaway
As one of the world's largest ethylene producer, Dow Chemical is well poised to meet increasing global demand for plastics products at low costs. But investors will be happier to know that ethylene is just one of the growth catalysts for the company. Dow seems to be working around its other businesses as aggressively, and its recent restructuring efforts could go a long way in bumping up its sales and profits. Stay tuned for more analysis on Dow's growth plans and moves.