Many investors know Wells Fargo (NYSE:WFC) is a great bank with a number of compelling things going for it, but one recent quote could change the opinion of many regarding the firm.

"We purchased additional shares of Wells Fargo."
The quote above was noted by Warren Buffett, in the annual report for Berkshire Hathaway (NYSE:BRK.A)(NYSE:BRK.B). Buffett highlights Berkshire now owns a staggering 9.2% of the world's most valuable bank by market capitalization, which is up from the 8.7% last year.

In total Berkshire increased its position by 23.6 million shares, which using the prices at the end of the year would've represented an additional cost of roughly $1 billion.

While many value investors shy away from Wells Fargo as a result of its lofty valuation compared to peers -- which actually has risen 30% over the last year -- it's important to see one of the world's most acclaimed investors felt no issue in adding to his stake in the firm.

Buffett also highlighted Berkshire Hathaway has the option to buy 700 million shares in Bank of America, which would be worth roughly $10.9 billion.

His words on Bank of America and Brian Moynihan over the years have been full of praise. Like Wells Fargo, those found in the annual report truly show how Buffett highly considers the Bank of America, as he noted, "it is important for you to realize that Bank of America is, in effect, our fifth largest equity investment and one we value highly."

However, it's equally important to see Buffett has had that option since the fall of 2011. Yet he has maintained a constant position in Bank of America -- a firm that was undoubtedly more appealing from a value perspective -- but has in fact grown his total holdings of Wells Fargo by nearly 30% over the same time: 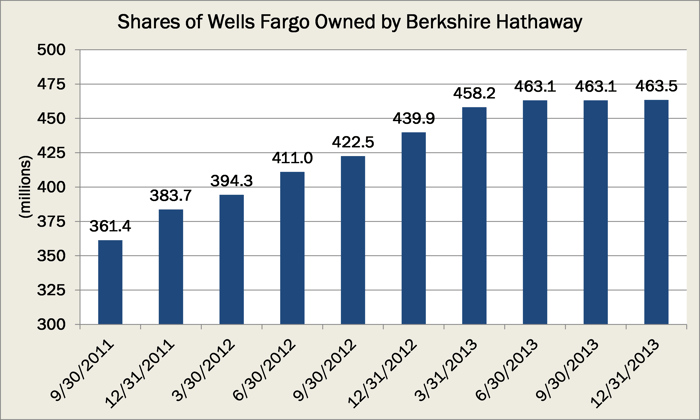 The reason for the lofty valuation
Buffett also once remarked "it's far better to buy a wonderful company at a fair price than a fair company at a wonderful price," and a quick glance at the returns provide by Wells Fargo in 2013 versus its peers helps explain why he was so willing to add to his investment in the firm:

When you also add in the fact it was able to grow its net income by 16% to $21.9 billion, and also handsomely reward its shareholders by raising its dividends per share by 31%, it's no surprise Buffett has had no qualms adding to his already massive stake in Wells Fargo. While the valuation indeed is lofty, every metrics indicates that high price is warranted.

The Foolish bottom line
Buffett has made known of his desire to buy companies when the market doesn't value them appropriately, and at the end of the year the position in Wells Fargo that was held by Berkshire Hathaway had a market value of $22 billion, at a cost of $11.9 billion, meaning Buffett had already nearly doubled his money in the firm.

Yet this example is a vivid reminder a great firm even with a premium valuation relative to peers -- like Wells Fargo -- can still be undervalued.