I really, really hope you haven't been following analyst ratings for coal recently, because if you have, they have quite possibly led you astray with both Walter Energy (OTC:WLTGQ) and Alpha Natrual Resources (NYSE: ANR). It's not just that recent downgrades have been a little late to catch on; analyst recommendations for these stocks are still on the positive side despite continued signs that it will take quite some time before the metallurgical coal markets pick up. Let's take a quick look at what analysts think of these struggling coal companies and whether there is some promise down the road.

This word you keep saying, I don't think it means what I think you think it means
In the past two years, there have been 14 upgrades, downgrades, and coverage initiations between both Alpha Natural Resources and Walter Energy. Somehow within that time frame -- despite Walter posting quarterly losses for six straight quarters and Alpha registering its last positive net income figure in the second quarter of 2011-- there have been six analyst upgrades or positive coverage initiations.

Only recently have the downgrades started to come in, but somehow, these downgrades still aren't enough to offset the generally positive opinion for these coal stocks. Last month's total recommendations for these stocks were overwhelmingly toward the hold/market perform, with more buy recommendations than sells. Perhaps there needs to be a clearer definition of the term "market perform," because it's hard to imagine that "market perform" means a company can lose 75% of its value in two years while the S&P 500 gains a very respectable 33%. 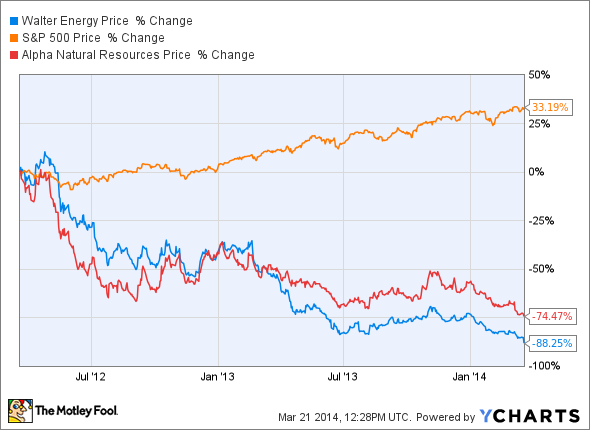 There is some fog in that crystal ball
Analyst opinions are supposed to be what a company will do in the future, not what it has done previously, so we can forgive analysts a bit for keeping a slightly positive outlook for these companies. The metallurgical coal market is a cyclical market that pretty much follows the market for steel because, well, making steel is what metallurgical coal is used for. Unfortunately for metallurgical coal, though, not only has the steel market seen some recent issues, but natural gas is starting to creep its way into the steelmaking process in place of coal.

Steel production has been, and still continues to be, a rather weak market. Prices for coking coal in its most important market, China, are at about $138 per ton, the lowest they have been in over four years. To compound this problem, China's largest steel-making hub in Heibei province will cut steel output enough to reduce metallurgical coal consumption by 15 million tons. When you combine slumping steel production and fierce competition from Australian and Indonesian mines to sell coking coal to the global market, you get a recipe for coking coal prices that teeter on unprofitable levels for everyone involved.

Not only do Walter and Alpha need to fight with foreign coal companies, they also have their own struggles domestically against natural gas. Nucor (NYSE:NUE), the nation's third largest steel manufacturer, has recently completed a $750 million direct reduced iron facility in Louisiana that will use natural gas to fire its electric arc furnaces. The company has recently announced it is looking into potentially spending another $2.7 billion to expand its facility there because of the success it's having at the facility. This could eat into Walter and Alpha's business as well, and could continue to keep prices low for even longer.

What a Fool believes
Here is what really boggles the mind: Research analysts predict that coal prices will remain extremely weak for maybe a year or more, and they are all well aware of the increasing debt loads that both Walter Energy and Alpha Natural Resources have taken on recently to cover their need for cash. Yet despite all of these issues that will seriously hinder either company from actually generating a profit, they maintain their market perform ratings.

If this proves anything, it's that you should take analyst opinions on stocks with a 50-pound sack of salt. Be sure to do some homework of your own, because following analyst opinions blindly could lead you down a path like this one.