This weekend, Divergent, the latest film looking to capitalize on young adult audiences, will hit theaters after a year of behind-the-scenes buzz. Many are split if the film will follow in the footsteps of megahit The Hunger Games or collapse like megamiss Ender's Game, but for the moment analysts are optimistic. 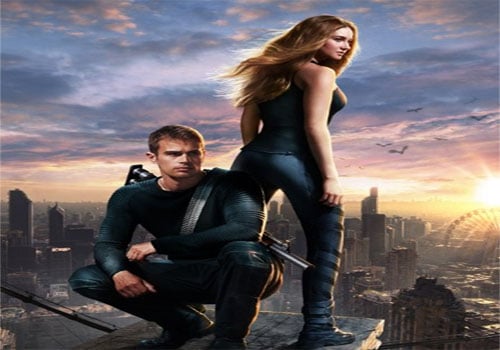 Despite the streets of Hollywood being littered with the remains of failed young adult franchises, Divergent comes to theaters carrying a swagger that the others never truly had.

Films like Beautiful Creatures, The Mortal Instruments, and Vampire Academy all slipped quietly onto the release calendars. If the trailers hadn't said "based on the books," general audiences might not have known their backgrounds. Divergent smashed its way onto the schedule thanks to its creative, young author and its huge success in bookstores.

The truth is that the Hollywood studios don't decide what the next pop culture phenomenon is -- the media helps. Harry Potter, Twilight, and Hunger Games basically lived on the magazine covers of industry barometers like Entertainment Weekly for their entire runs, while other films were relegated to cover chips and second-tier feature stories (if that). Divergent is being groomed to be that successor to the young adult crown because the industry likes its backstory and the backstory of its participants.

Divergent's appeal is two-fold. It's based on a successful book aimed at young adults and it carries an impressive cast of actors who relate to young adults. It also helps that the author of the book series, Veronica Roth, is 25 years old herself. Roth wrote in a way she knew would appeal to the younger generation and Summit (a subsidiary of Lionsgate (NYSE:LGF-A) saw that immediately and pounced on the film's rights.

Just as Harry Potter introduced the world to Daniel Radcliffe, Twilight launched Kristin Stewart, and Hunger Games vaulted Jennifer Lawrence into the stratosphere, Divergent has its own secret weapon: Shailene Woodley. The likable 22-year-old has a shared fanbase with Lawrence and is also a critical darling.

This is her big time to shine. With fellow rising stars Theo James (Golden Boy) and Jai Courtney (A Good Day to Die Hard), Woodley fronts an ensemble that will get that coveted young adult audience into the seats. Divergent is looking to prove it's not just a matter of finding "a" lead, but rather the right lead.

Tracking on Divergent is upwards of $65 million to $70 million. If it hits that number, it will cement its status as a blockbuster. Made for just $80 million (a steal by today's standards), the film will likely come closest to following Twilight's trajectory, which included a $69 million opening that swelled to $142 million by the time the final one came out.

The Hunger Games started even higher than that, but that's because Jennifer Lawrence was already a big name by the time it debuted in 2012. She had been already nominated for her first Academy Award and rode the wave that came with being a part of the X-Men reboot, First Class to being a mainstream name.

Woodley, to her credit, also has made a name for herself through The Descendants, The Spectacular Now, and The Secret Life of the American Teenager, but while she may be as talented as Lawrence, she doesn't have the same name recognition. That will come. But what Summit's doing is similar to what it did with Twilight -- nurturing the franchise and building out its strong suits, which include her.

A lot more is riding on Divergent than just one studio's investment. The entire sub-genre has its hopes pinned to this film. You can chalk a faltering series like Percy Jackson up to not having a marquee name and a misfire like Enders' Game because of its loose cannon author, but all the pieces are here for Divergent to succeed. If it fails, it's the audience's way of telling the industry to go back to the drawing board.

While it doesn't look like it will fail, we have to adjust our definition of a hit nowadays. Nobody is expecting Divergent to mimic Hunger Games' totals just yet, they're looking for its potential to do so. A $65 million to $70 million opening against a family friendly brand like The Muppets would position it as legitimate box office contender, but even a $45 million to $50 million opening would be a positive sign given its somewhat modest budget and the large hole other films like it have dug for future franchises over the last year.

While Divergent is expected to take a hit with critics who have been less than kind so far, readers of the book series won't care ... they'll want to see the movie for themselves and be their own judges.

One of the main rules of film is to respect the audience, and Summit is trying carefully to abide by that practice. Moviegoers are excited for the film to hit theaters and they are rooting for it to do well.

Divergent isn't The Hunger Games or Twilight, but it 's walking in the footsteps of those franchise that have come before ... which will invite comparisons. Still the film's fate rests in the hands of the public, and they seem willing to go along for the ride.

My colleague Daniel Kline disagrees with me. To read his take, click here.