MannKind Corp.'s regulatory review for Afrezza is close at hand. Does the stock offer a favorable risk to reward profile?

It seems there is never a dull moment in the health care sector. On nearly a daily basis, some company is soaring to new heights or sinking like a stone. And most of the really big moves in the sector, up or down, are tied to a pivotal regulatory event. With MannKind's ( MNKD ) briefing documents set to be revealed next Friday, March 28, followed by the all-important Advisory Committee meeting on April Fool's day, you may want to carefully consider the stock's risk to reward profile around this binary event. With this goal in mind, let's consider the prior outcomes for three biotechs, Arena Pharmaceuticals ( ARNA -1.54% ), Chelsea Therapeutics (NASDAQ: CHTP), and Vanda Pharmaceuticals ( VNDA -1.26% ), that were facing comparable situations in the not-so-distant past.

Why Arena, Chelsea, and Vanda may shed light on MannKind's future
I didn't choose these three companies randomly for comparative purposes. Instead, I think they offer some unique lessons for MannKind investors for a couple of reasons. First, all three companies were in positions heading into a key regulatory event for their flagship clinical candidate similar to what MannKind is looking at today. For example, these three companies saw their share prices rise in dramatic fashion ahead of their regulatory events, and each was highly dependent on a positive outcome to keep from dropping equally quickly. Given their notable similarities, I wanted to retrace the performance of each companies' stock immediately before and after their respective regulatory decisions and see what lessons can be learned ahead of MannKind's pending review. And finally, I wanted to explore how each company's stock has performed since its regulatory decision was handed down.

Stock performance surrounding and after a binary event
Arena shares jumped another 28% the day Belviq was approved, despite rising several fold leading into the drug's approval. Yet this gain was short-lived. Arena shares have now dropped 45% from their post-approval highs. Turning to last month's approval of Northera and Chelsea Therapeutics, the company's shares popped 26% upon approval. Since then, Chelsea's shares have been particularly volatile, but are only down slightly from their post-approval highs. Vanda Pharmaceuticals is the oddball of the group. Upon news that its drug Hetlioz for non-24hr disorder was approved, shares actually sank by 16%. However, Vanda's shares are now up 38% since the drug's approval in January. Overall, these empirical examples paint a mixed picture for the prospects of biotechs like MannKind heading into a major regulatory decision.

One thing is certain -- risk
Although the historical cases mentioned above show the difficulty of assessing potential upside around a binary event, the downside risk should be evident. As a reminder, Dynavax Technologies Corp. ( DVAX -3.90% ) dropped by nearly 60% in a single day when its lead vaccine candidate Heplisav was rejected by the U.S. Food and Drug Administration. Shares ultimately fell around 68% from their former highs. What's important to understand is that this is a common type of market reaction when a developmental biotech fails to gain approval for a top clinical prospect. Arena Pharmaceuticals, for example, saw a similar type of drop after Belviq was rejected in its first regulatory review. And Chelsea fared only slightly better when Northera was rejected in 2012.

Foolish final thoughts
MannKind has been a tremendously volatile stock over the last two years, illustrated by the chart below. My view is that this roller coaster type action reflects the regulatory and commercial uncertainty surrounding Afrezza. 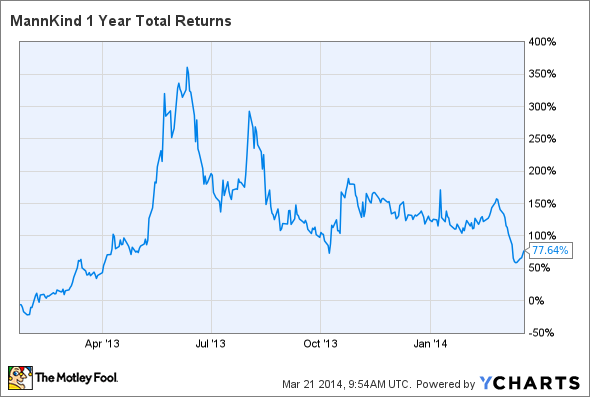 Looking at Afrezza from a commercial perspective, experts have suggested that the drug could see peak sales of anywhere from $1.5 to $2.5 billion if approved. Even so, MannKind does have problems with its fundamentals. Specifically, the company has been burning, on average, $11.5 million per month lately, giving them only about five months of runway remaining. If Afrezza is approved, MannKind will therefore need to either partner immediately or raise a large sum of money. Overall, I think the commercial overhangs surrounding Afrezza will limit any post-approval 'pop.' A rejection, on the other hand, will undoubtedly see MannKind shares fall in dramatic fashion. As a risk-adverse investor, my view is that it's probably best to remain on the sidelines until the regulatory and commercialization risks have been taken off the table.