Google's (NASDAQ:GOOGL) mobile ad sales today should remind you of Google's overall sales a decade ago. This is the growth engine that will keep Big G moving forward.

That's the big takeaway from a brand new ad sales report from online ad management specialist Marin Software, anyhow. Marin looked at its ad inventory over the last few years, which focuses on large advertisers with annual online ad budgets of $100,000 or more. So Marin's analysis might be a little skewed, if large advertisers behave differently from those with small and mid-size marketing budgets.

That being said, Marin presented this sharp graph on Google's mobile revenue shares in recent and upcoming years:

So I put these percentages together with Google's online revenues, which excludes results from the soon-to-be-sold Motorola Mobility hardware division. For 2014 and 2015, I used estimates from S&P Capital IQ and removed $4.5 billion from estimated sales in 2014 and 2015 -- again, to account for that Motorola division and its lack of ad-based revenues.

This is the result:

The plain revenue graph shows a transforming business model. Google is growing (and expected to keep growing) at a healthy pace, but that growth is driven almost exclusively by mobile ad traffic. The non-mobile line is flattening out dramatically.

Switch over to the percentage growth chart for a look at Google's annual growth rates. This graph underscores how dramatically mobile growth is outshining desktop growth.

If that yellow ski-slope line looks familiar, you've probably watched Google from its start as a publicly traded company. See if this oldie rings a bell: 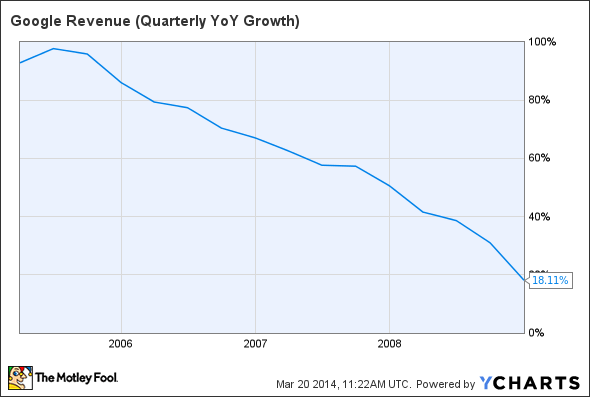 This one's from a time when Google's total sales were doubling year over year -- and slowing down as the increasingly large numbers became harder to double. This is where Google's mobile sales trends are right now, taking the baton from the aging desktop-based growth model.

And it's not just Google. Just to name a few, I'm sure that Marin Software could have dug up similar graphs for Facebook (NASDAQ:FB) and LinkedIn (NYSE:LNKD.DL), too, since both companies are going through a similar business model overhaul. Mobile revenues are becoming increasingly important across the online business sector. It's time to adopt or be swallowed up by those who manage the change.

Google seems to have caught on to this trend in a healthy way. LinkedIn has grown its mobile revenue ratio from 2% to more than 40% in the last five years. And in the last quarter, more than half of Facebook's ad revenue came from mobile users -- a company first.

So today's big names are working hard to stay relevant in the emerging mobile era. Investors need to keep a close eye on mobile success stories (and failures!), and be ready to jettison a favorite stock if the company's mobile strategy implodes.