Amgen ( AMGN 2.81% ) is working on a new cholesterol-busting drug that may reinvent how doctors attack cardiovascular disease. The company's AMG-145, also known as evolocumab, could be on its way to the FDA for approval this year. If the agency approves the drug, doctors may not have to rely solely on statins to lower the bad cholesterol levels of their patients anymore.

Advancing AMG-145 through regulators may not prove just a win for Amgen. It may also breathe much needed new life in Merck's ( MRK 1.20% ) Zetia, a cholesterol-lowering drug that may otherwise see its use wane. 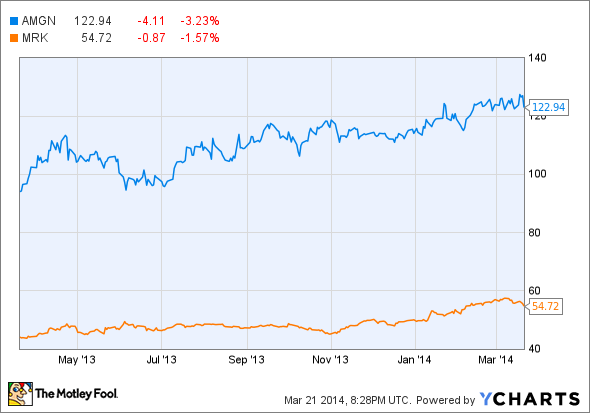 Developing new ways to lower cholesterol
The use of statins, like generic Lipitor and AstraZeneca's ( AZN 0.87% ) Crestor, should grow this year following changes to guidelines used to identify patients eligible for the drugs. According to the New England Journal of Medicine, nearly 13 million patients may now be good candidates for statin therapy based on those changes.

The impact of the guidelines on Merck's Zetia and Vytorin, which combines Merck's Zetia with its Zocor statin, is less clear. Sales of Vytorin fell 6%, to $1.6 billion, last year as doctors questioned whether using the more expensive combination drug, rather than generics, truly lowers patient risk of heart attack or stroke.

Despite Vytorin's stalling sales, revenue from Zetia, which can be prescribed alongside other statins like Lipitor and Crestor, grew 4%, to $2.6 billion, making it Merck's best-selling cardiovascular drug, and its second biggest selling drug overall.

However, investors should wonder whether the guidelines, which also remove a specific target level for cholesterol levels, will hinder rather than help Zetia's use. Previously, doctors trying to get patients' stubborn LDL levels below those targets encouraged the use of Zetia. Now, some doctors may shy away from prescribing it.

That worry may lessen given that the results from late-stage trials studying AMG-145 alongside Zetia appear compelling enough to position the two as a potential one-two punch against bad cholesterol.

In mid stage phase 2 trials, combining AMG-145 with Zetia reduced bad cholesterol by 63%. That was better than the 51% reduction noted in patients treated with AMG-145. It was also significantly better than the 15% reduction for those treated only with Zetia. Patients on the combination therapy also saw their good cholesterol, or HDL, improve by up to 12%. For comparison, patients treated only with Zetia saw their good cholesterol levels fall by an average 1%.

Although Amgen hasn't released the detailed phase 3 data yet (it's saving that for upcoming conferences), it has reported that the late-stage data to be used as part of its FDA filing was similar to the mid-stage results.

That could suggest that doctors will turn to using the two drugs together as a standard of care in patients whose bad cholesterol levels are poorly controlled by statins, or in patients who can't tolerate statins due to side effects like muscle weakness or memory loss.

Fool-worthy final thoughts
The FDA has sent letters to Amgen and Regeneron, which is working on a competing PCSK9 therapy, asking the companies to look into possible neurological side effects. That sent shares lower as investors worried about the safety profile of the drug class. However, those fears may be overblown given neurological events have also been observed in statin patients, and that hasn't derailed its use.

Estimates peg the number of patients in the U.S. whose cholesterol is poorly controlled by statins at 11 million. Another 1 million patients are intolerant to statins due to side effects. Since new statin guidelines are expected to boost the patient population eligible for statins from a third to nearly half of all U.S. adults, it seems AMG-145's market opportunity may also benefit Merck's Zetia.