Does lobbying play a role in your investment thesis? Maybe it should.

It's Sunshine Week 2014! For those unfamiliar, Sunshine Week aims to raise awareness and bring about more disclosure to the U.S. government. Given that this is an investing site, our focus is on publicly traded companies and the money they spend lobbying Washington. All of the data in this article comes from opensecrets.org and the Senate Lobbying Disclosure Act database.

Today, our focus is on General Electric ( GE 0.75% ). The conglomerate was one of the top five lobbying spenders out of all publicly traded companies in 2013. Of the $3.21 billion spent on lobbying last year, $16.1 million of it came from GE.

On the face of it, $16.1 million is a huge amount of money to spend on advocacy, but how does it compare to GE's lobbying record over time? Is this kind of spending a one-time occurrence or an annual tradition? 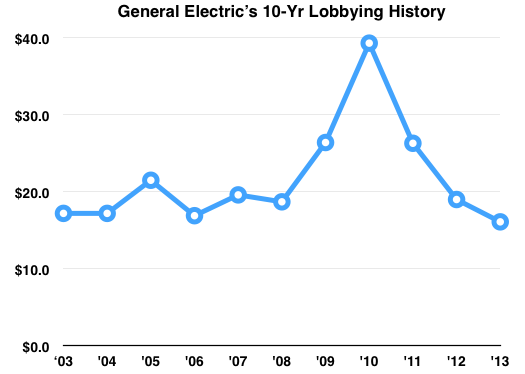 At first glance, it looks like GE has driven down its lobbying expenditures significantly in recent years, but it has still spent no less than $15 million on lobbying each year for the past decade.

But what exactly is GE trying to achieve by spending all this cash currying favor in our nation's capital? As a conglomerate made up of extremely varied business segments, the opportunities are endless. Here's a look at its lobbying record broken out by the number of reports filed by specific issue code: 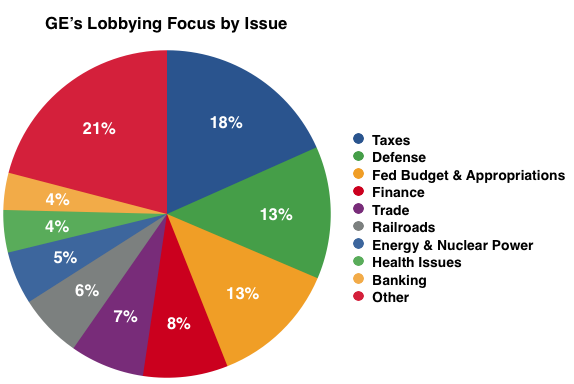 Believe it or not, GE is the only one of the five top spenders to have the "taxes" category fill the No. 1 slot. After that, the issues break down into the company's primary operations. Clearly, there is a lot of emphasis on defense and budget appropriations, two issues that go hand in hand, and that is something that investors might want to research further. For a closer look at the specific sub-issues present in GE's lobby story, you can click here.

If you are just getting to know General Electric from a shareholder's perspective, this information is invaluable for getting a true sense of what matters to the company today and where its business is heading.

How this affects your holdings
Now that we've flushed out GE's lobbying profile, it's fair to ask what it all means in relation to shareholders. Does lobbying really matter to investors? Does it affect the returns of our stocks?

As it turns out, it absolutely does.

Academic research has turned up a direct link between lobbying activity and shareholder wealth, illustrating that publicly traded companies that spend money lobbying post better market returns than companies that do not. In a study published last summer by researchers at the University of Mississippi, the authors wrote, "Our results suggest that stocks of lobbying firms significantly outperform non-lobbying firms."

An investment research firm called Strategas has taken it one step further, creating an index that tracks the 50 companies that spend the most money on lobbying every year. It claims its index has beaten the S&P 500 for the last 15 straight years, implying the market is not properly valuing lobbying expenditures.