Zillow (NASDAQ:ZG) is a household name surrounding...houses. Yet it is off the radar of many investors. But one chart will likely change all of that.

Striking similarities and differences
In 2010, Twitter (NYSE:TWTR) and Zillow each had around $30 million in top line revenue. Zillow was at $30 million and Twitter -- surprisingly -- narrowly trailed it with $28 million in revenue. Yet as shown in the chart below, things have been on rather divergent paths since then: 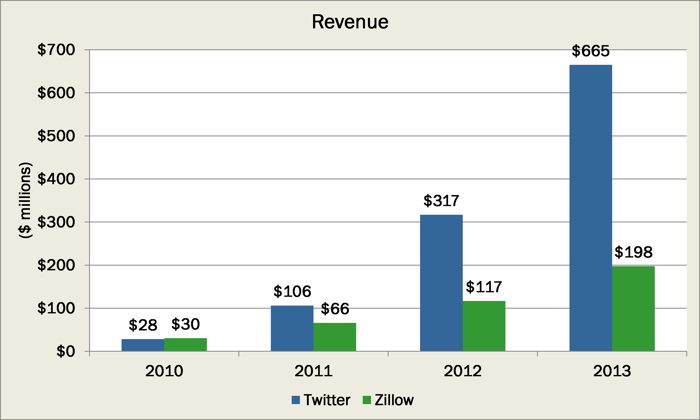 The revenue at Twitter has risen by an astonishing 2,250% since 2010, whereas Zillow has witnessed its revenue rise by just 550%. Naturally investors must think this means Twitter would be a much better investment consideration, and the chart is further evidence to this reality. However, further digging reveals the chart above shouldn't draw that conclusion at all.

"Just 550%"
It is critical to note while the technology landscape is where Zillow ultimately lands, it would be naïve to consider its growth prospects alongside those of Twitter. At its core, it is a service intended for people who are preparing to make likely the largest financial decision of their lives.

Consider in 2012 the government reported the average American spent 33% of their income on housing. While Zillow doesn't have the scope of Twitter -- which is why the revenue growth at Twitter is so much more impressive -- since that is a decision which is likely considered at most once or twice per year, it nonetheless provides a critical service to millions of Americans.

While at its core Zillow does operate in the technology space -- it is an Internet company after all -- it notes in its annual report it instead uses social media channels for advertising and engagement purposes, and that is not what it itself is. Instead investors should see at its core it is not a social utility, but a valuable service to both those looking to find homes to rent or buy and those looking to find renters and buyers.

And ultimately, while the 2,250% revenue growth by Twitter is staggering and impressive, 550% growth is also remarkable.

The 1 chart that matters
Yet the thing is, the topline number at Zillow doesn't reveal the clearest picture. At first thought, both Twitter and Zillow are dependent on advertising dollars. Yet there is an absolutely critical distinction with Zillow, as it has two sources of revenue, that from advertising (display revenue) and the revenue it brings in from paid subscriptions from real estate agents and that which it generates from its Mortgage Marketplace. Together these two create its Marketplace revenue.

A glance at its revenue growth is impressive, but what is truly remarkable is the staggering growth of its Marketplace revenue: 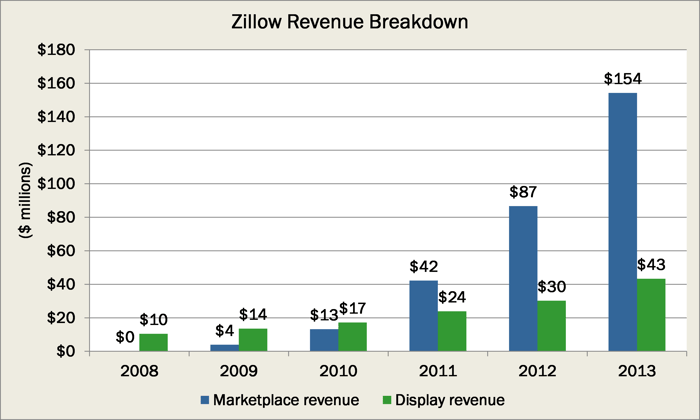 As you can see, it went from being essentially nonexistent in 2008 to a staggering $154 million last year.

This is critical because the Marketplace revenue is indeed much more "sticky," than the display revenue. After all, advertisers will simply follow the eyeballs. Twitter itself even notes its biggest risk is not the loss of advertisers, but instead the loss of users, saying, "If we fail to grow our user base, or if user engagement or ad engagement on our platform decline, our revenue, business and operating results may be harmed."

The Foolish bottom line
Ultimately, while the business models at first glance appear to be similar, they are in fact different. And the true driver of Zillow's success will be its utilization from the real estate professionals that depend on it for their own success. And when you consider the revenue from those sources has risen by nearly 4,000% over the last five years, it's not difficult to imagine it has a long runway of growth ahead of it.