General Electric Company, Intel Corporation, and Procter & Gamble Company are all making our world a wetter and better place.

Today is World Water Day and, unfortunately, it's increasingly clear that we're overconsuming, wasting, and polluting more than our fair share of this essential liquid. Luckily, there are companies out there fighting our addiction one drop at a time. Here's why General Electric Company ( GE -2.10% ), Intel Corporation ( INTC -1.22% ), and Procter & Gamble Company ( PG 1.26% ) are all making our world a wetter and better place.

General Electric Company has the sixth most powerful brand in the world, but few folks consider this company a water warrior. This conglomerate makes everything from jet engines to Big Data prediction software, but its water win comes an unsuspecting area: natural gas fracking.

Here in the U.S., natural gas is booming. In the past 25 years, we've pushed production up a whopping 30%. 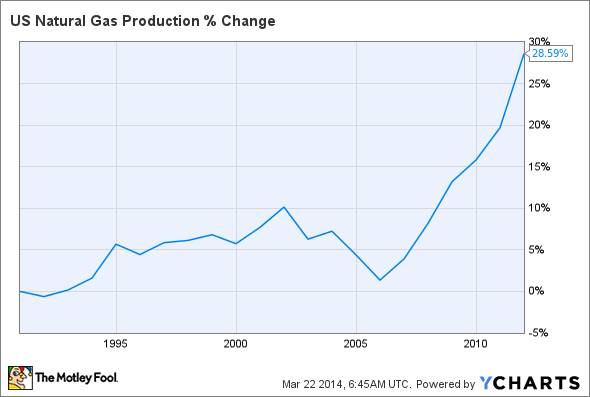 But to get to most of that gas, energy companies are employing hydraulic fracturing ("fracking"), a process that involves pumping massive amounts of water (and other stuff) into the ground to extract that golden gas. While estimates vary considerably, it can take anywhere from 1 million to 8 million gallons of water per fracking job. Either way, that's a heck of a lot of H2O.

General Electric Company announced last month that it's investing billions into figuring out a waterless way to frack. The company's partnering with Norway's Statoil to see whether CO2 can be used instead of H2O. The corporations want to make this an economically viable option for large-scale operations. If successful, General Electric Company eventually hopes to be able to also recapture that same carbon dioxide for reuse every single fracking time.

No matter which side of the fracking debate you're on, that's an unequivocal win for water.

You may not think it, but that Intel Corporation chip in your laptop or smartphone took boatloads of water to manufacture. Ultrapure water is a vital ingredient in Intel Corporation's model, allowing the company to clean off chemicals from chip surfaces after they've been polished to perfection.

Intel has been an early mover in water conservation. While a single plant in Chandler, Ariz., gobbles up 9 million gallons of water, the company has managed to drastically cut its consumption. Not only does Intel Corporation now use 1.25 gallons of regular water to create its ultrapure mix instead of 2, but it's also added in wastewater recycling. Whereas most chip manufacturers send their used water straight to the sewers, Intel Corporation repurifies for another round or, if there's excess, for the cleanest tap water around. I'll drink to that.

Worldwide, 780 million people don't have access to clean water. For the past 10 years, Procter & Gamble Company has been pumping out chlorinated water to people in over 75 countries. Working with non-profit organizations like World Vision, Procter & Gamble Company recently celebrated its 1 billionth liter of clean water distributed to folks worldwide.

When you consider that 1 million children under the age of five die every year from diarrhea caused by contaminated water, clean H2O is a serious issue -- and Procter & Gamble is taking it seriously. Not only does it continue to work with non-profits around the world, but it's also teamed up with research organizations to rigorously test the full impact of its efforts, ensuring continued efforts to hone its processes to efficiently and effectively increase clean water access in the years to come.