But few of us can invest in every single dividend-paying stock on the market, and even if we could, we're likely to find better gains by being selective. Today, two of the world's largest game publishers will square off in a head-to-head battle to determine which offers a better dividend for your portfolio.

Tale of the tape
Founded  in 1979, Activision Blizzard (NASDAQ: ATVI) is the holding company for video game publishers Activision and Blizzard Entertainment. It is the world's largest publisher of online, PC, console, handheld, and mobile interactive entertainment software. Headquartered in Santa Monica, California, Activision's video game development centers are located throughout the United States, Europe, and Asia, and the company's products are sold across the globe. The company also boasts industry-dominating franchises in World of Warcraft and Call of Duty. Activision recently bought out the portion of its stake held by Vivendi for $5.8 billion from Vivendi to become a fully independent company. Last year, and investors have been bidding shares up ever since.

Founded in 2004 by Chi Yufeng, the onetime president of Human Software Corporation, Perfect World (NASDAQ: PWRD) is a leading online game developer and operator specializing in massively multiplayer online role playing games, or MMORPGs, for the Chinese market. Headquartered in Beijing, Perfect World offers popular Chinese MMORPGs such as Legend of Martial Arts, Zhu Xian, Battle of the Immortals, and the Perfect World series. The company utilizes a time-based payment model for Perfect World and an item-based freemium model for its other games. Perfect World also licenses its MMORPGs to leading game operators in Asia, Latin America, Australia, New Zealand, the Russian Federation, and other Russian-dominant territories. 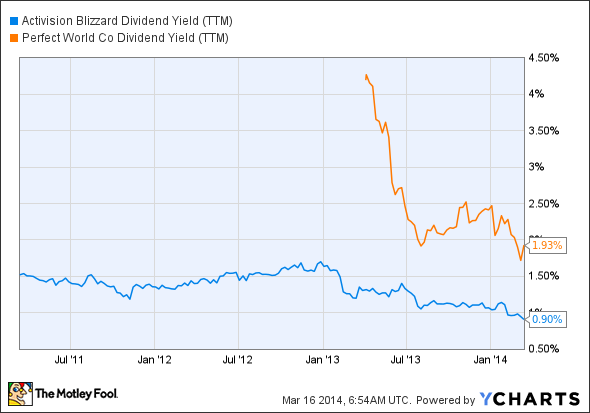 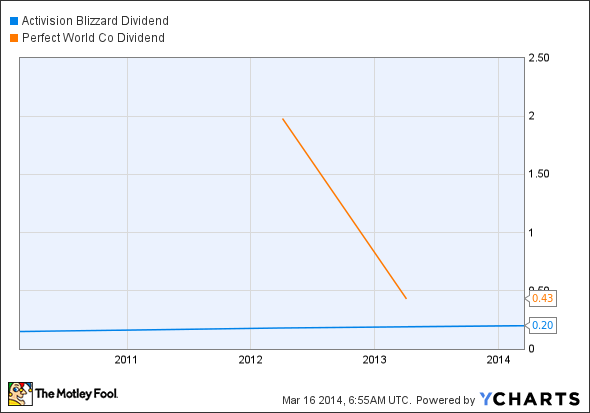 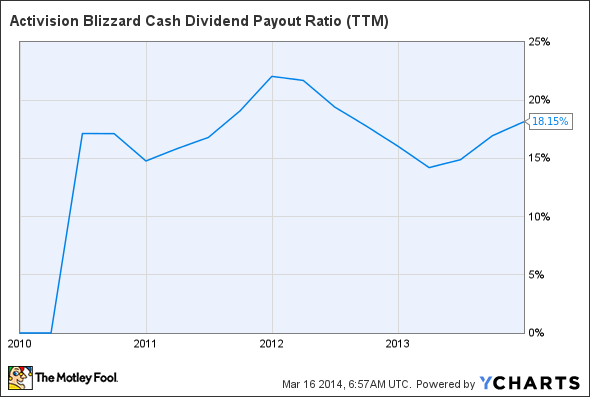 Perfect World's payout ratio doesn't show up here, but its last distribution, recorded in 2012, was a whopping 98% of its free cash flow. That's scary high, and far too reliant on steady growth in this metric's to earn the Chinese developer a win here.

Bonus round: opportunities and threats
Activision Blizzard may have won the best-of-five on the basis of its history, but investors should never base their decisions on past performance alone. Tomorrow might bring a far different business environment, so it's important to also examine each company's potential, whether it happens to be nearly boundless or constrained too tightly for growth.

One dividend to rule them all
In this writer's humble opinion, it seems that Activision has a better shot at long-term outperformance, because of an unmatched track record of hits including Call of Duty, World of Warcraft, Diablo, and Skylanders. In addition, Activision's sequel and expansion-pack strategy should continue to drive growth for at least the near future. Perfect World is also well-positioned to capitalize on a rise in online gaming interest across China, but unlike Activision, there appears to be no dominant franchise in its stable to hold gamers' interest -- yet. You might disagree, and if so, you're encouraged to share your viewpoint in the comments below. No dividend is completely perfect, but some are bound to produce better results than others. Keep your eyes open -- you never know where you might find the next great dividend stock!