Pandora has thrived since the launch of iTunes Radio, but the Apple threat still looms over the stock.

Before Apple ( AAPL 1.39% ) launched iTunes Radio, investors were uncertain about the implications Apple's streaming music service could have on Pandora ( P ). Speculation for Pandora's fate ranged from a small loss of incremental opportunity in a fast-growing streaming market to the more extreme opinion that Pandora simply wouldn't be able to compete and its users would inevitably fall off.

Six months since iTunes Radio's launch, Pandora has thrived. Not only has the stock soared 25% since iTunes Radio launched, but users have continued to grow, too. In the company's most recent quarter, Pandora monthly active users hit an all-time high of 76.2 million. Even more, Pandora's fourth-quarter revenue was up 50% from the year-ago quarter as monetization improved across all dimensions of Pandora's business.

But even after all of Pandora's success, the company said in a recent court filing that it still considers Apple a "major competitor," according to AppleInsider. Based on a particular data point that was also revealed in the trial, Pandora has an excellent reason to feel iTunes Radio is a threat.

The main threat to Pandora's future
Forty percent of Pandora's users access the service through Apple hardware. What happens if Apple beefs up iTunes radio and makes it both more accessible and more compelling? Could this convince a large chunk of these Apple hardware Pandora users to switch to iTunes Radio?

There is a very good chance iTunes Radio will improve significantly this year. The service is just six months old and has only been featured on one major version of iOS so far. As is typical for the company, Apple's native apps will likely benefit from major redesigns when it launches the next version of iOS. 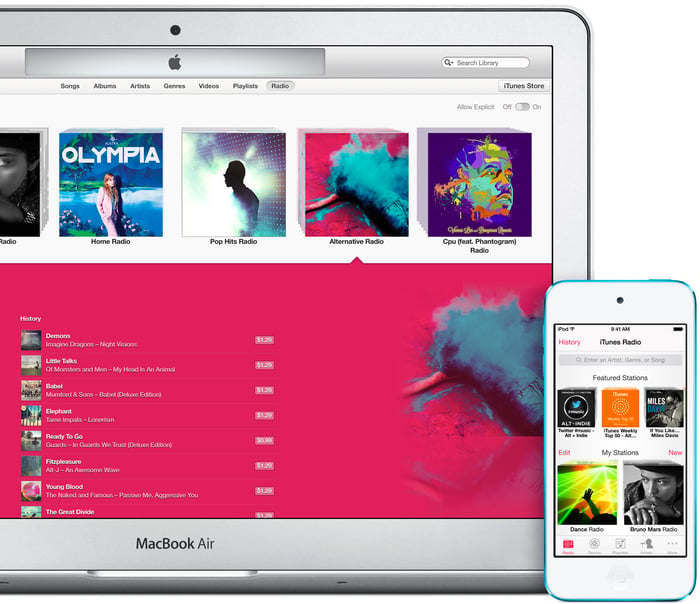 As a stand-alone application, users will be able to more quickly access iTunes Radio. Psychologically for users, iTunes Radio will be its own app competing with the likes of the Pandora, Spotify, and iHeartRadio apps found on the App Store.

Meanwhile, Pandora's recently announced price changes couldn't be timed any worse. The company said in a March 18 blog post that it is boosting its price of its ad-free listening experience for new members by 25% in May, giving Pandora a total cost of about $60 per year. Meanwhile, iTunes Radio's ad-free annual fee is just $25.

Can Pandora withstand a revamped iTunes Radio?
On non-Apple devices, absolutely. But as Apple improves iTunes Radio along with its integration and accessibility, it will be increasingly difficult for Pandora to keep its user base on Apple hardware. And, unfortunately for Pandora investors, that user base accounts for nearly half of its listeners.

While I love Pandora and personally use it in place of iTunes Radio, a risk profile like this makes the stock itself too risky.