The Carnival (NYSE:CCL) Triumph in February 2013 was a five-day disaster, all started by an engine fire. Passengers endured no working toilets, no air-conditioning, and a limited supply of food all while trapped at sea. After this unfortunate event, Carnival invested $115 million in improvements for fire safety and added backup power.

Safe or not?
According to testimony before the U.S. Senate Committee on Commerce, Science, and Transportation, the U.S. Coast Guard detained the Carnival Triumph on or around June 12, 2013. This related to a failed inspection, including serious deficiencies related to fire detection and lifeboat drills. There were 28 other deficiencies as well, including problems with sprinkler systems.

What's interesting is that around this same time, Carnival posted a video about the improvements of the Carnival Triumph, ensuring the safety of passengers.

Due to past events, the Carnival Triumph will now be subject to quarterly examination for three years.

While people will offer all kinds of opinions on the competence -- or lack thereof -- of Carnival's upper management, the fact is that the company has seen numerous incidents over the past several years. Therefore, it might not be the best investment option in its peer group.

Investing in safety and results
President and CEO Gerald Cahill has been in charge since 2007.

Royal Caribbean (NYSE:RCL) President and CEO Adam Goldstein has been running his company since 2007 as well.

If it all starts at the top and you're looking to invest in the leadership that offers the most potential, then first consider past results. The chart below compares total investor returns (stock appreciation plus dividends) over the past five years: 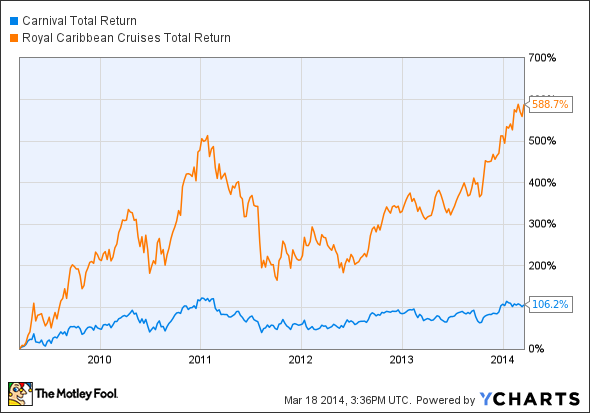 Based on this chart, Royal Caribbean has stronger leadership and is more likely to reward its investors in the future.

Norwegian Cruise Line Holdings (NYSE:NCLH)went public in January 2013. Over the past year, the stock has appreciated 9.5%, whereas Royal Caribbean and Carnival have seen stock appreciations of 59.7% and 16.5%, respectively, over the same time frame.

Over the past year, Carnival has seen its revenue increase just 0.8%, while Royal Caribbean and Norwegian Cruise Line have seen revenue increases of 2.5% and 12.3%, respectively.

Summary
Carnival is a strong brand name with international recognition. Therefore, a turnaround is possible. However, at the moment, leadership seems to be lacking. It's one incident and excuse after another. Norwegian Cruise Line is growing rapidly, but it's also very expensive, which makes expectations high.

Royal Caribbean might not be growing as fast as Norwegian Cruise Line, but it's offering steady top-line growth and trading at a much better valuation. Add strong leadership and a somewhat generous yield, and it should be the most appealing cruise-line investment of the group. As always,Foolish investors should do their own research prior to making any investment decisions.