By now, most investors in Dresser-Rand Group, Inc. (NYSE: DRC), will have realized that the company recently gave disappointing earnings and guidance. While, some of its problems are stock specific, it was also subject to some industry wide issues that will also affect key competitors like General Electric Company (NYSE:GE). In addition, Dresser Rand's guidance for 2014 is significantly behind the long-term targets set by the management in 2010.  So, why is the company missing its long-term objectives, and what does it mean for the rest of the industry?

Focusing on the operating income miss in 2013 ( the final figure came in $169 million lower than previously predicted), there were five key issues that hit Dresser Rand.

First, a draft change in Spanish electricity regulations threatens its pig manure treatment operations, and operating income was reduced by $22 million for potential retrospective actions and by $40 million for asset impairment.

Second, technical issues delayed shipments of three projects and reduced operating income by $25 million in 2013. The good news is that these issues are now sorted and, all of the units are expected to be shipped by the end of the second quarter.

Third, two items (the sale of three power plants and revenue recognition for a pipeline project in Central Asia) didn't fall into place as expected, causing a $19 million shortfall in operating income.

General Electric Company and Baker Hughes give mixed guidance
Simply put, the trend within the upstream oil and gas market (Dresser-Rand generated 98% of its revenue from energy infrastructure in 2013) is for relatively stronger conditions in emerging markets than the U.S.  A breakout of its 2013 revenue by end market reveals how important oil and gas production and refining is to the company. 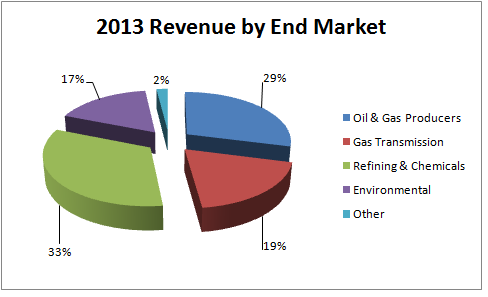 For example, when questioned on the issue, General Electric Company's CEO, Jeff Immelt, outlined that while the major U.S. integrated oil companies were holding back on investment, the national oil companies (which tend to be in emerging markets) "haven't backed off at all".

In addition, oil and gas services company Baker Hughes Incorporated's (NYSE:BHI) management predicts that the U.S. onshore rig count will be essentially flat in 2014, but its forecast for the international rig count is for a 10% increase. Baker Hughes' closely followed U.S. rotary rig count index has perked up a bit lately, but it still remains notably below 2011-2012 averages. 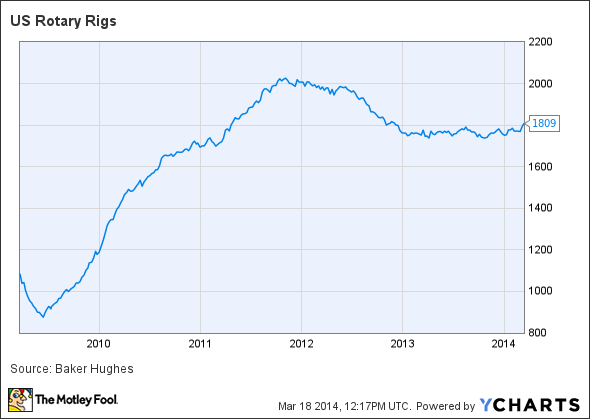 The problem facing Dresser-Rand and General Electric Company, is that while emerging market end demand appears stronger, negative currency effects are reducing profits from these regions.

Why Dresser-Rand missed its long-term targets
Indeed, for various reasons (including currency) Dresser-Rand is forecasting revenue for 2014, that is more than a $1 billion shy of the $4 billion it hoped to have by the end of 2014. In discussing the reasons for the shortfall, management outlined the following factors. For the record, the company generated a 50-50 revenue split between new units and aftermarket sales in 2013.

Clearly, the biggest disappointment comes from the delay in upstream projects.

Where next?
Unfortunately, the biggest issue (upstream project spending) is a sector specific one, and Dresser-Rand, alongside rivals like General Electric Company, is likely to continue to face such challenges in the short term. Moreover, Dresser-Rand's forecast of only 5%-10% growth in aftermarket sales (usually less cyclical and comprising 50% of total sales) was also disappointing. The stock trades on a current P/E ratio of more than 25 times earnings, and with flat revenue forecast for 2014, it doesn't look a particularly good value.