Though private companies, these companies's failures have major lessons for investors who look to identify winning businesses.

Recently, two high profile bankruptcies dominated restaurant industry headlines. First Sbarro, the pizza chain found in countless malls nationwide, went belly up on March 10th for the second time in 3 years, while sub-sandwich maker Quiznos followed suit just four days later. Although both of these restaurants are privately held companies, investors can still learn from what went wrong. By identifying what makes certain companies losers, you can better appreciate what makes a winner especially in the highly competitive restaurant industry.

Why Sbarro failed
Sbarro's failure resulted from its unhealthy debt-load. As long as its operations remained healthy, it could manage the debt. However, when consumers began to shun shopping malls -- Sbarro's main territory -- during the recession, the company entered a downward spiral. At its worst in 2011, the company had $487 million in debt along with $471 million in assets. This debt was greatly reduced when it reemerged from bankruptcy, but its current liabilities of $165 million still proved to be too much in the face of dropping foot traffic in America's malls. .

A large (and growing) debt problem gives a company less flexibility during tough times. To illustrate just how bad things have gotten for Sbarro, take a look at Buffalo Wild Wings (BWLD) Buffalo Wild Wings doesn't need to worry about declining traffic and a massive debt load. This company has faced a recession, chicken wing inflation, a tepid casual-dining environment, and a polar vortex virtually unscathed, and it still remains in high-growth mode. 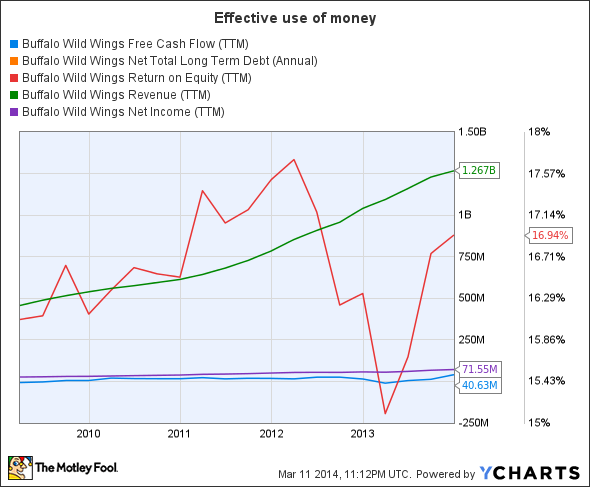 Buffalo Wild Wings' management has a long track record of taking cash flows and turning them into higher revenues and profits. Because it does not need to fret about creditors, this company has more money available to invest in the business and grow shareholder value.

Why Quiznos failed
Like Sbarro, Quiznos let its debt become a problem. However, ultimately the company's demise can be traced to two bigger issues.

First, Quiznos had a weak competitive advantage. The company surged from obscurity to the mainstream on the platform of "mmmm...Toasty!" At it's height in 2006/2007, the company had grown to 5,000 units. While the company offered delicious subs, Subway could easily buy toasters. By introducing toasted subs in 2005, Subway duplicated Quiznos's novelty. One year later, Quiznos began to unravel. It has shed over 60% of its units to its current count of less than 2,000.

One might be fooled into thinking that Chipotle Mexican Grill (CMG 0.20%) also has a weak competitive advantage. After all, how hard is it to make a burrito? Competitors abound as Taco Bell has Cantina Bell and Jack in Box has Qdoba. However, Chipotle isn't about the burrito. It's about the source of the burrito.

Competitors can not easily replicate Chipotle's food-sourcing machine. We're talking 100% sour cream from pasture-fed cows, naturally raised pork, 85% antibiotic-free chicken, and locally sourced vegetables. This hasn't been easy to do, and these higher-cost ingredients cut into profits. However, Chipotle's customers demand these things. Given the complexity of this sourcing, I doubt we'll see a true competitor in this area anytime soon.

Secondly, Quiznos' franchised business model had a serious flaw: it was nigh-impossible for a franchisee to turn a profit. Many franchisees lasted just three years, with some racking up $150,000 in operating losses in that time. These losses, on top of $300,000 in start-up costs, left many franchisee's no choice but to close.

Opening a restaurant costs money and not everyone is cut out for it, so it's hard to completely fault Quiznos for every failed franchisee. However, the company brought new franchisees on board at a concerning rate. The 100th Quiznos opened in December 1995. By 2007, the company had 5,000 locations. Put another way, Quiznos opened more than one new location every day for 11 years. At that unbelievable expansion rate, the company had less-than-choosy criteria for who could and who couldn't become a franchisee.

This is reason to like the Potbelly (PBPB 2.12%) selective franchise model. This chain will not grow to 5,000 locations in the next 11 years -- rather the company plans to expand by 10% per year, primarily through company-owned locations. Those who do wish to open Potbelly franchises have a high financial bar to clear -- opening a franchise could cost $750,000. This will keep many aspiring entrepreneurs away from Potbelly, leaving only the most highly motivated and business-savvy individuals to join the team.

A glimmer of hope
Bankruptcy is not necessarily the end of a restaurant chain. Both of these companies have the opportunity to reemerge from bankruptcy with hopes of flying high once again. Sbarro has a promising new fast casual concept called Pizza Cucinova, which would put the company on the right side of pizza trends for once. Quiznos franchisees have submitted proposals to change the franchise structure.

Regardless of Sbarro's and Quizno's futures, investors should take note of their past failures and track future changes to gauge success. Learning from this can help as you analyze your favorite public restaurant and invest effectively in this highly dynamic sector.