America's energy industry has gone from zero to hero in less than a decade. We now lead the world in natural gas production. We have so much gas that we'll begin exporting our excess starting next year. Beyond that, we're expected to become the world's largest oil producer next year. We'll soon produce more oil than our refineries can handle, which is why some suggest we'll need to begin exporting oil, too. Despite our quick rise to the top, we're still in the very first inning of the energy boom and here are three charts that prove it.

Decades of drilling ahead

One company right in the middle of America's energy boom is midstream operator Enterprise Products Partners (NYSE:EPD). It is one of the many pipeline and processing companies that are playing a critical role in moving our booming oil and gas production. That role requires the company to invest billions to build infrastructure in order to get ahead of production so that wells don't sit idle for too long. In planning ahead, Enterprise predicts that hundreds of thousands of wells will be drilled in the years to come as America develops its core shale plays as the following slide details: 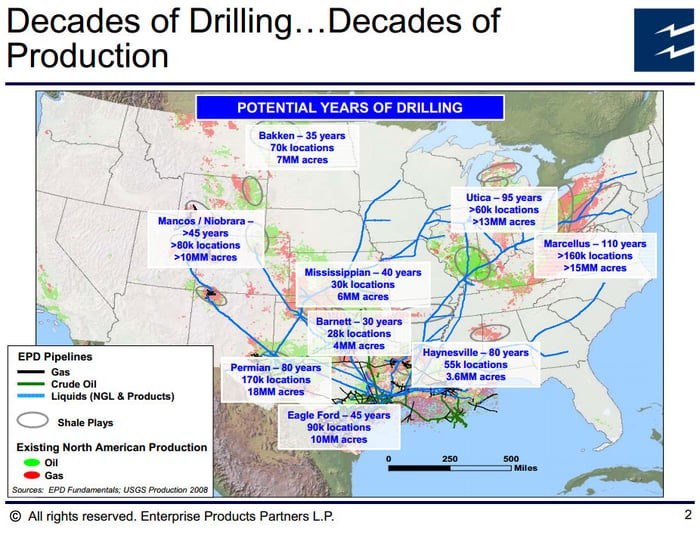 As that slide notes many of America's shale basins have three decades or more as the industry needs to drill tens of thousands of future wells. In the Bakken, for example, the slide notes that there are at least 70,000 future well locations, which corresponds to comments made by Continental Resources (NYSE:CLR) CEO Harold Hamm, who believes 100,000 wells will eventually be drilled in the region over the next three decades. That's actually double the previous estimate from just a few years ago.

Stacked with potential
One of the reasons the industry keeps revising its drilling potential higher is due to the stacked pay potential of shale. Similar to a layer cake, shale plays are stacked with hydrocarbon rich pay zones. The next slide gives a majestic view of these layers: 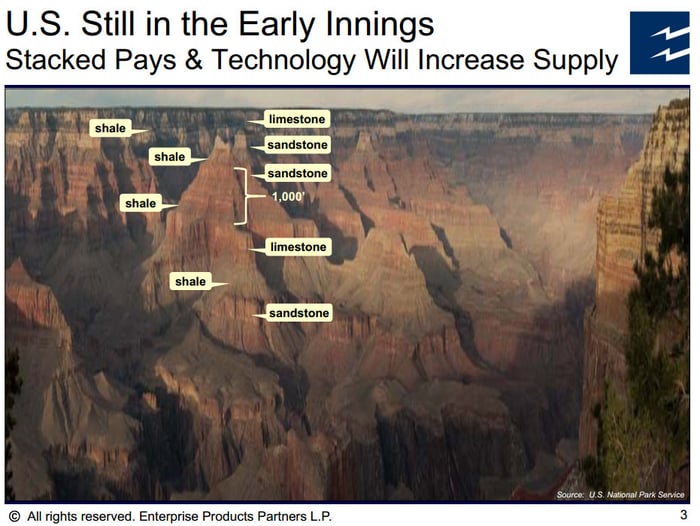 Imagine these layers being a few thousand feet underground with each layer saturated with oil and gas. That's basically what we're looking at when it comes to these shale plays. One example of this stacked pay is found in the Bakken Shale region, where Continental Resources and its peers are targeting the less talked about Three Forks formation that sits below the Bakken. Continental Resources believes it can extract just as much oil from the Three Forks as from the more well-known Bakken.

This is why we're seeing comments like those made by ConocoPhillips (NYSE:COP) CEO Ryan Lance that are likening the energy boom to a baseball game. Earlier this year, Lance said, "We're in the first inning of a nine-inning game on the shale revolution in the United States." He also noted that "what people are learning is that we've only scratched the surface on what technology can do to improve that outlook over the years." He specifically pointed out that the Niobrara Formation in Colorado as a "layer that is going to last for quite some time." He can say that because ConocoPhillips is still just exploring that formation while some of its peers are just starting to move from exploration to a development mode with some peers targeting up to three zones.

Finally, this last slide shows just how many potential additional producing zones are likely to be found in America's shale plays: 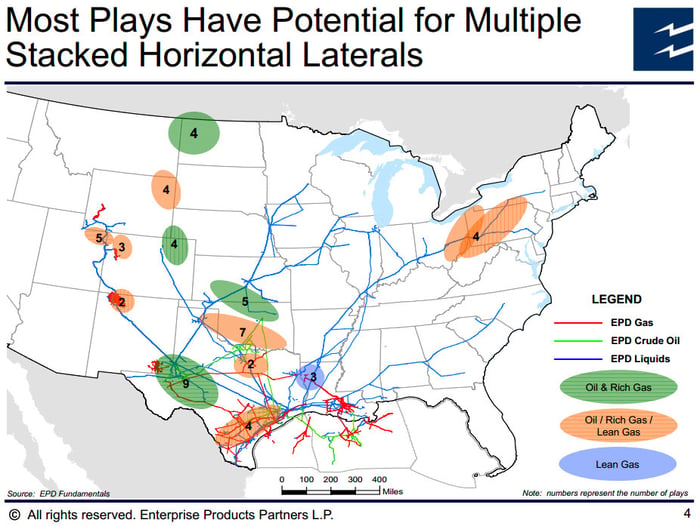 America's energy layer cake will play a big role in keeping production growing in the years ahead. One reason this will be possible is newer technology like pad drilling enabling producers to drill multiple wells into multiple zones while keeping costs low. This will allow producers like Continental Resources and ConocoPhillips to produce from zones that might not otherwise be economical on a single well pad.

Investor takeaway
We're much earlier into America's energy boom than many investors realize. The industry has hundreds of thousands of future wells yet to be drilled, with that number potentially increasing as new zones above and below current targets are found to be productive. Not only that but the industry is finding that wells can be spaced much closer together to extract more oil and gas out of each layer. Further, as new technology is developed, we someday could extract additional quantities of oil and gas out of these layers as a vast majority of it is still trapped in these tight shale formations despite the industry's best efforts.