Clean energy was one of the hottest investments on the market last year. Once-moribund solar stocks shone brightly, wind energy whipped stagnant share prices into a roaring gale of gains, and even formerly abandoned biofuel hopefuls began to look like more than just a pipe dream: 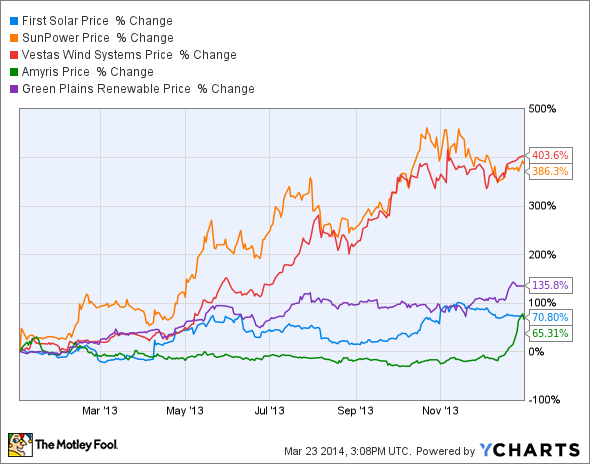 Yet in spite of all this growth, many investors missed one critical story in the clean-energy space: total renewables investments have been falling fast. Since peaking in 2011, annual global spending on all clean-energy investments has fallen by 20%, according to data compiled by Bloomberg's New Energy Finance group: 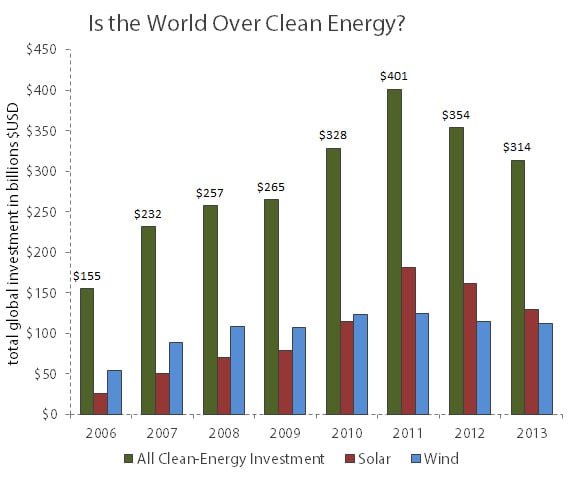 Solar and wind power, which have long been the two leading lights of renewable energy, each suffered similar declines as seen in the sector as a whole. Solar grew most impressively from 2006 to 2011 but saw 28% less investment flow in 2013 than it did during its peak year. Global wind energy investment is 10% below 2011's high, but that sector appears to have effectively leveled off, as 2013's investments were only 4% greater than 2008's. 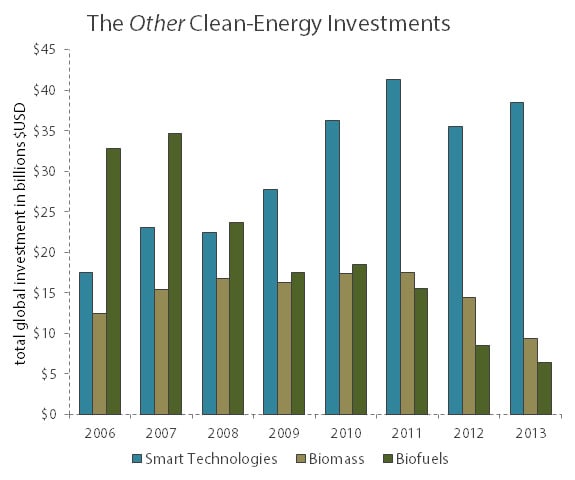 With total global investment of $38.5 billion in 2013, energy-smart technology, which is typically identified with the "smart grid" and with greater energy-use efficiencies through computerized control (Bloomberg also counts transportation and storage in this sector), is the best-performing clean-energy sector in the world outside solar. It's more than doubled its investment dollars since 2006, but even the smart grid isn't immune to investor burnout, as 2013's totals were 7% below the 2011 peak.

There are a few explanations for this drop. When it comes to solar energy, the answer offers far more good news than bad -- the costs of solar installations have dropped like a rock since 2010, according to Fool solar expert Travis Hoium. Installations continue to increase the total generative capacity of solar power by leaps and bounds year after year, more than offsetting the decline in the costs-per-watt of these installations. Global solar power output grew by 58% from 2011 to 2012 despite a drop in investment spending, and the world's solar capacity grew by 37% from 2012 to 2013.

In spite of cost-per-watt declines, some of the largest solar companies have held the line on their top lines over the past few years. More importantly, they've rediscovered ways to produce these less-costly panels profitably -- both First Solar (NASDAQ:FSLR) and SunPower (NASDAQ:SPWR) returned to profitability over the past year. 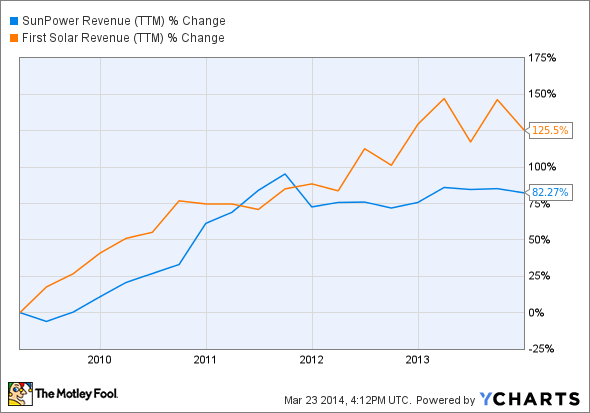 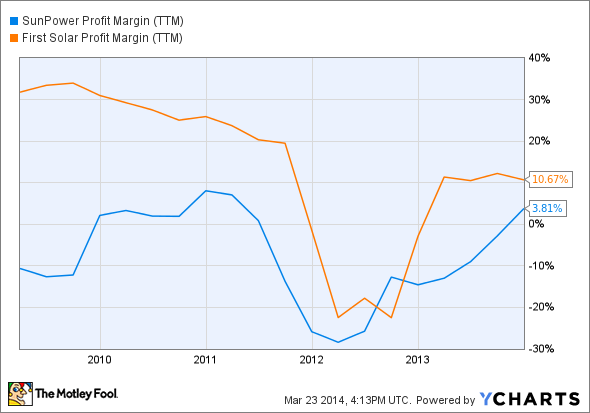 The same can't be said of global wind-power leader Vestas (NASDAQOTH: VWDRY), which saw its revenue and profit margin peak in 2011 along with global spending. The Danish manufacturer slipped into the red at the end of that year, and it continues to have difficulties pushing either its top or its bottom lines higher. The technology behind wind power isn't as easily advanced year after year as solar, which is subject to a similar rate of exponential technology improvement as is seen in the semiconductor industry. 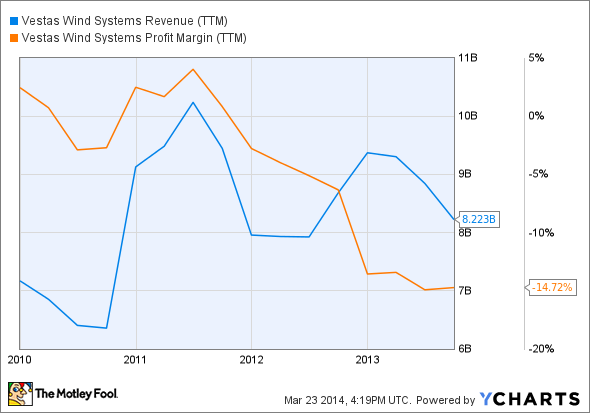 Indeed, wind's weakness might be generalizable to other sectors, none of which (save perhaps the digital smart-grid technologies) can make use of the same exponential improvements offered by silicon substrates. Biofuel stocks have had an especially rough go of it as investors realize that synthesizing useful products at scale below the cost of pumping a barrel of oil out of the ground is far easier promised than accomplished: 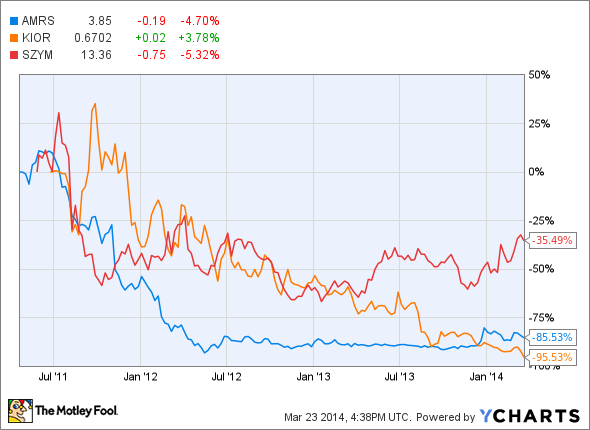 None of these three biofuel companies are close to profitability, and most rational investors would consider their margins abysmally bad -- the best profit margin on this list is Solazyme's (NASDAQ:TVIA), which at negative 292% means that it spends nearly three dollars for every dollar of revenue! Amyris' (NASDAQ:AMRS) negative 570% profit margin is what happens when you lose $235 million to make $41 million in annual revenue. Solazyme has all but conceded that it can't compete with petroleum, and it's now focused more on producing algae-based oils for consumer products. It's not likely that algae-based biofuel will be profitable at prices below $10 a gallon any time soon. Biofuel derived from sugarcane, which is Amyris' specialty, is closer to reality, but one estimate last year determined that this type of biofuel can only be competitive  with oil if oil cost 60% more per barrel.

The only dedicated "biofuel" producer that reports reasonable profitability is Green Plains Renewable (NASDAQ:GPRE), an ethanol specialist that has benefited enormously from government subsidies and mandates over the years. While the primary direct ethanol subsidy (tax credits) expired two years ago, the Renewable Fuel Standard's  mandate requiring ethanol-gasoline blends has propped up ethanol prices to such a degree that producers like Green Plains didn't really bother lobbying for the extension of direct subsidies. If the government were to suddenly mandate that gasoline be 10% biofuel content, you would probably expect Solazyme and Amyris to scale up to such a degree that they might become profitable, too, regardless of the costs to American drivers.

On one hand, investment in clean energy is down because one large component of the clean-energy picture -- solar -- is in a race to the bottom cost-wise that will undoubtedly benefit consumers and create a virtuous cycle of greater demand over time. That's great news. On the other hand, optimism surrounding many other clean-energy sectors has waned as investors gradually realize that Silicon Valley's principles of progress can't be cut-and-pasted into industries based on chemical processes. That's not necessarily bad news, provided that money flows more toward the technologies that work and away from the technologies that can't. Wind power is likely to continue to expand, but over the long run, it's solar that's going to dominate the clean-energy picture, especially if it can produce more power at less cost year after year.