From Occupy Wall Street protests to angry calls and even angrier confrontation in bank branches, many have voiced their complaints about the biggest banks in a number of different ways through the years. Yet a recent survey reveals how the banks have responded to those complaints may be wrong as well.

Why customer service matters
One of the reasons customer satisfaction and service has become so critical for banks are the changing dynamics of the banking business model. Many have noted one of the keys to profits moving forward is ensuring multiple relationships are established -- all in the name of cross sale -- across different types of financial services products. Banks want customers to have checking accounts, broker accounts, mortgages, and much more with them to generate loyalty and higher revenues.

Yet while many of these banks may have failed in the past with customer service, they are now actively seek to change all that.

This is part of the reasons why Huntington Bancshares (NASDAQ:HBAN) has been so successful. It not only leads in customer satisfaction and service, but it also has capitalized on this service to draw customers into fuller relationships with it. In fact since the end of 2011 it was watched customers having more than 6 products with it grow from 42% to 48%.

In fact in its most recent annual report when Bank of America (NYSE:BAC) highlighted it operates "in a highly competitive environment," it continued by saying, "competition is based on a number of factors including, among others, customer service." Of all the areas which it could list, it is fascinating it highlighted customer service first.

One of the ways banks have sought to improve customer service is through social media channels like Facebook and Twitter as more interaction occurs there each and every day. Yet as it turns out, customers have agreed, this approach is all wrong.

Not the ideal improvement
A report released by Carlisle & Gallagher Consulting Group recently found that when it comes to banking, customers almost universally agree the last place they want to discuss the problems they've had with their bank is in public, with 90% of customers surveyed preferring discussing their problems privately with their banks.

In fact, 68% of customers said they would never use social media to solve a problem with their bank, while 87% believed the social media usage of banks was annoying, boring or unhelpful. After the final results were tallied, Carlisle & Gallagher noted "banking customers hesitate to publically discuss complaints about their financial institution."

Yet it isn't just one thing that has caused customer confusion or frustration, as complaints span across a wide range of products and issues as shown in the chart below: 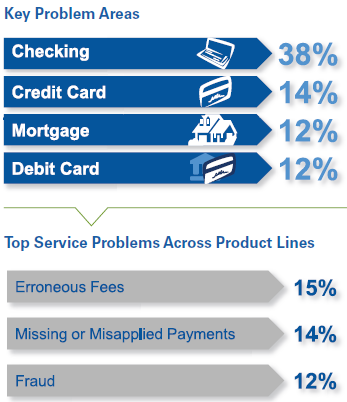 The impact to the bottom line
While it may come as no surprise banks aren't great at customer service, what may come as a surprise is the powerful impact customer service can have for investors. As shown below, one of the best ways for a bank to generate more business from its existing customers is simply to resolve their complaints and problems in just one interaction: 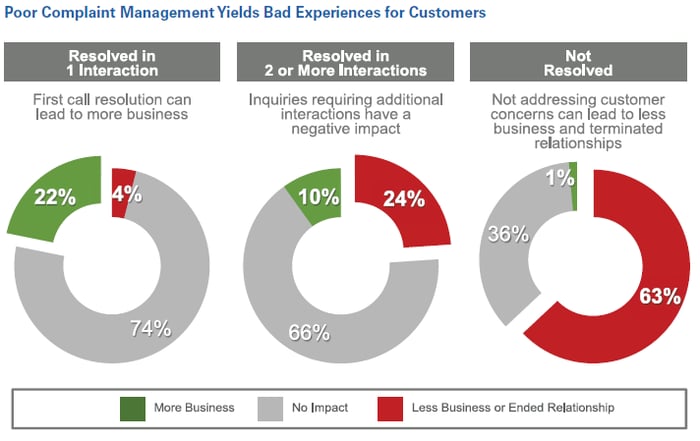 And conversely one of the quickest ways for the biggest banks to lose business is to not resolve the problems or concerns customers present to them.

Carlisle & Gallagher uses a powerful example from American Express, which shifted from gauging its customer service representatives on the speed by which they handle complaints, by moving from a scripted environment to a conversational and relational one.

As a result American Express has built positive relationships with its customers which has resulted in; "a 10% to 15% increase in spending and four to five times increased retention, both of which drive shareholder value. What's more, AmEx's operating expenses associated with service have gone down because they are more streamlined, and they limit friction points and errors."

With banks, credit cards, and other financial services becoming more available as technology advances and growth is sought with every passing day, those that provide the best customer service will benefit not only their customers, but their shareholders as well.