There are lots of reasons to avoid this hot stock, but are they convincing?

Almost exactly three years ago, while I was searching for the next "Rule Breaking" stock, I came upon 3D Systems Corporation ( DDD -3.85% ) -- one of the leaders in 3-D printing technology -- and said it had all the traits of a home-run stock. Though I didn't buy the stock at the time, shares have zoomed 380% higher since then.

Obviously, when a stock has risen so much -- and you own shares of the stock -- it's at least worth asking: Is now the time to sell? Read below to see what I think.

Every year around springtime, I review all of my family's stock holdings. Currently, we own 32 different stocks, and 3D Systems Corporation is one of them. Because I'm already a shareholder -- and I think it's important to consider the other side of every investment -- I review a bearish take on my holdings to see how they make me feel.

What follows are the two most poignant -- in my opinion -- arguments 3D Systems bears make about the company, and my feelings about them. Because this argument is taking a view from 30,000 feet, the concerns and responses are general, and specific details are best found by clicking on the links I provide.

So, here's what the bears are saying.

"The company is just too expensive!"

There are lots of ways to measure how expensive a stock is. Two that are very popular are the price-to-earnings (P/E) ratio and the price-to-free-cash-flow (P/FCF) ratio. Traditionally, the average stock in the S&P 500 trades for a ratio of 15, for both measures.

But 3D Systems is a different story altogether. Currently, shares trade for about 73 times earnings (non-GAAP) and 360 times free cash flow. Those are astronomical numbers, and they lead many to believe there's no way the stock can meet such lofty expectations.

Furthermore, since the beginning of 2011, the company's shares have risen by almost 500%. But the company's earnings have only grown by 150% since then. Of course, that's not bad at all, but it means the rest of the gain is based on a huge expectation surge. Back in 2011, shares traded for roughly 30 times earnings. They've more than doubled since. Many would argue this isn't sustainable.

My take: You'd be wise to heed these concerns, but there's no reason to stay out of the stock altogether.

Some of the greatest, most cutting-edge companies of our time have always had expensive stocks. It stands to reason they'll always carry hefty premiums if they're identified as quality, industry-disrupting organizations. I believe 3D Systems qualifies as one such company. Fellow Fool Steve Heller does an excellent job demonstrating how this technology could change the world of manufacturing.

Furthermore, a better gauge for value might be looking at the company's market cap, which currently sits at about $6.5 billion. If 3-D printing were to reach its fullest potential, one could easily see the company's stock growing to a much larger valuation.

That being said, it's worth noting that such value concerns are valid. That's why, currently, 3D Systems' shares currently account for just 1% of my family's overall holdings.

The company is growing by acquisition, and this will eventually catch up with it
3D Systems wants to be the "Everything 3-D Printing Store." It has its hands in consumer, commercial, and industrial printing. Doing so isn't easy, and the company hasn't entered all these markets by forging its own path.

Instead, they've taken the somewhat perilous route of growth by acquisition. Over the past three years, 3D Systems has made no less than 50 acquisitions. This means that although revenue has grown by an impressive 48% per year between 2010 and 2013, investors should be wary of the company simply "buying" the revenue.

My take: Also a fair concern that gives me pause, but the organic growth is still there.

In the 3-D printing world, Stratasys ( SSYS -6.56% ) is by far my favorite player. The company makes far fewer acquisitions than 3D Systems. But when Stratasys does make them -- with Objet and MakerBot -- they're big.

In general, acquisitions can be tough to make work. You're not just acquiring a company, you're buying the sum total of all the actions of a company's employees and trying to integrate them with your own grander vision. That's not easy to do, especially when you're doing it 50 times. That's why Stratasys accounts for a much larger percentage -- 4% overall -- of my family's holdings. 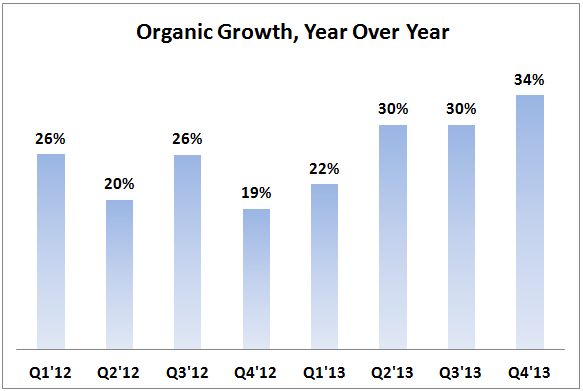 Again, the growth-by-acquisition route isn't something I'm totally comfortable with -- that's why the company has a much lower allocation than Stratasys. But there's no arguing against the vast potential of 3-D printing, or the fact that 3D Systems is one of the two top dogs in the industry.

For me, it's worth holding onto my shares, and looking to add at better and better value points as time goes on.