Recent trends in the health-care sector suggest that more defensive types of stocks might be good medicine for your portfolio.

The red-hot health-care sector has started cooling off. Over the past month, the iShares Nasdaq Biotechnology Index ( IBB -0.09% ) has fallen 7.33%, and last Friday saw the sector's biggest single day loss in recent memory. Although this near 5% drop was precipitated by political machinations surrounding the pricing of Gilead's ( GILD 1.71% ) new hepatitis C drug Sovaldi, it reveals the fear that is becoming part and parcel of the sector of late, namely the formation of a potential bubble. Put another way, the entire sector dropped on a mere suggestion that some drugs may be overpriced, not an actual change in pricing structure. And underneath all the noise, you need to understand that the real reason Sovaldi's pricing is being questioned is because the demand has been astronomically high, putting significant pressure on public and private insurers alike.

While I think that historically high demand for new drugs is a good thing for biotechs in the long run, you may want to start considering more defensive companies as a means to weather the political storm, so to speak. And based on recent trends, I think the migration to more defensive plays has already begun. 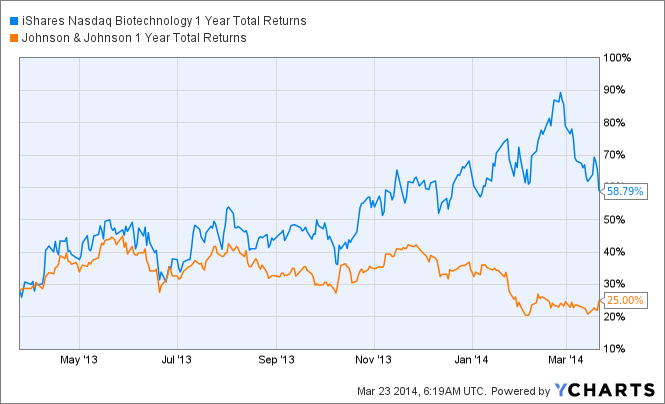 Reasons to add Johnson & Johnson to your health care holdings
Looking beyond sectorwide trends that may only be passing fads, I think there are a handful of good reasons to buy Johnson & Johnson that are rooted in the company's core business. On the clinical front, Johnson & Johnson has had a number of important developments occur so far this year. Last month, the U.S. Food and Drug Administration, or FDA, approved the company's blood cancer drug Imbruvica, which could see peak sales in the $6 billion to $7 billion range. And last week, Johnson & Johnson announced that a late-stage study for its three-month formulation of Invega Sustenna was halted early because of a positive efficacy outcome. Invega is already approved a top-selling treatment for schizophrenia in its once-monthly formulation, so this new formulation should help the drug gain an ever larger market share, assuming approval.

Johnson & Johnson also reported a major win on the legal front last week after an Arkansas court reversed a $1.2 billion decision against the company for fraud claims regarding its antipsychotic drug Risperdal.

Turning to Johnson & Johnson's fundamentals, the company exited 2013 with $20.9 billion in cash and cash equivalents. What's key to understand is that is roughly a 30% increase in cash year over year. This notable increase in cash is due primarily to double-digit growth in sales for drugs like Remicade and Zytiga. As a result, we've seen the company increase its dividend consistently and this trend looks like it will continue.

My view is that this diversified biotech gives investors a stable dividend, strong earnings growth over the long-term, and a long track record of outperforming broader indices such as the S&P 500. According to the company's internal metrics, Johnson & Johnson has now beaten the S&P 500 for 10 years running. So you may want to dig deeper in this "defensive" health-care stock that offers stability and growth in an increasingly turbulent market.