The market for treating diabetes is becoming getting increasingly competitive as drug developers innovate new, longer-lasting therapies to address the growing patient population. Over the coming two decades, the number of people diagnosed with diabetes is expected to climb from 366 million in 2011 to 552 million in 2030. That means there will be three new cases of diabetes diagnosed every 10 seconds.

The business of treating diabetes is already big. Among the leaders are Eli Lilly (NYSE:LLY) and AstraZeneca (NASDAQ:AZN). Both offer short and long-term insulin therapies generating billions in annual revenue, but both are also facing short-term headwinds tied to high-profile patent expirations. Since sales are likely to slump, is one of these companies a better buy than the other? 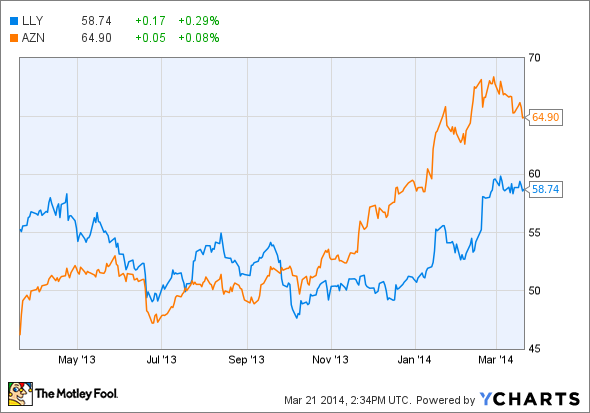 Debating earnings
Lilly lost patent exclusivity for its $5 billion a year depression treatment Cymbalta in December. That expiration means generic versions of the drug will likely shave away 70%-90% of Cymbalta's sales this year. AstraZeneca faces a similarly stiff challenge when its $3.8 billion a year Nexium goes off-patent in May.

In January, the loss of Cymbalta forced Lilly to lower its revenue guidance for 2014 from $20 billion to $19.2 billion -- $19.8 billion. Meanwhile, AstraZeneca in February predicted its sales would drop by low-to-mid single digits in 2014, and wouldn't return to 2013 levels until 2017.

The companies' sales slides will similarly drive earnings lower. Lilly expects earnings per share to come in between $2.77 and $2.85 in 2014, and AstraZeneca thinks earnings will fall from 2013 by a midteens rate this year. That has industry analysts expecting $2.81 per share for Lilly and $4.26 per share for Astra this year.

The earnings drop appears to have been more expected at Lilly, as analysts have actually improved their current year outlook from $2.78 per share over the past 90 days. Estimates at AstraZeneca, however, were $4.71 per share 90 days ago. The boost at Lilly may suggest analyst pessimism has bottomed -- at least for now.

It also suggests investors interested in owning shares in either company based on earnings will need cost savings initiatives to kick in more quickly than expected. If they do, Lilly and Astra could outpace their tepid outlooks.

Lilly hopes to shave up to $1 billion in costs by reducing its research and development spending. And AstraZeneca has announced moves geared toward eliminating $1.1 billion in annual expenses.

Debating valuation
Since revenue and earnings growth appear likely to elude both companies over the coming year, investors may want to focus more on valuation.

Unfortunately, neither company is overly cheap. Lilly's shares are trading at 14 times last year's earnings, but 18 times estimated earnings next year. AstraZeneca's shares have a current and future P/E of 31 and 15 times, respectively. Of course, those ratios could move dramatically if either company can more quickly reap the benefit of accountants' sharpened pencils.

Since neither appears particularly inexpensive, investors should also consider the strength of their dividend. Lilly's forward dividend yield is 3.3% and AstraZeneca's is 5.7%. Those are both compelling given the anemic rates investors are receiving in fixed income investments. However, those rates will only remain compelling if cash flow stays strong enough to support their payouts going forward.

Since earnings can be volatile due to one-time charges, investors should look at the cash dividend payout ratio, which looks at operating cash in relation to dividend payments. That can be a better gauge of whether these companies' businesses are delivering enough cash from operations to handle their dividend commitments. At both companies, the ratio appears fine based on the past 12 months. However, since cash flow will likely shrink this year, investors will want to watch this measure closely to see if it spikes. 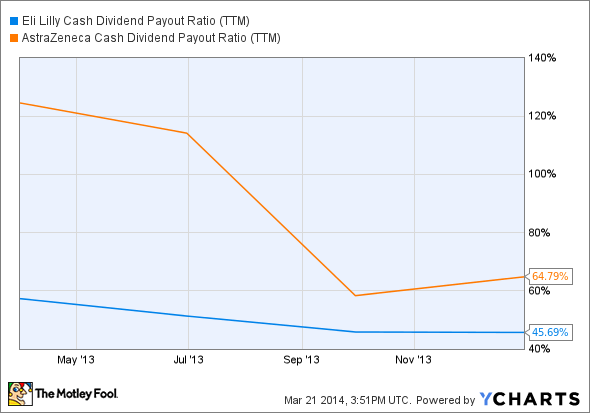 Both companies also have solid cash cushions they can lean on. Lilly has more than $5 in cash per share on hand, and levered free cash flow totaled $3.06 billion over the past 12 months. AstraZeneca has $10 billion in cash, or $8 per share, and produced $7 billion in free cash flow in the past year.

Fool-worthy final thoughts
Both companies are in the middle of important restructurings. That could make each leaner and better able to translate future sales into shareholder-friendly profit. Of course, the ability to return to growth and really leverage their cost-conscious footprint will come from ushering new drugs through their pipeline to market.

At Lilly, a lot of that pipeline potential rests on dulaglutide, a GLP-1 diabetes therapy under review by the FDA. During trials, the once-weekly therapy was as effective as Novo Nordisk's blockbuster once-daily drug Victoza. That dosing advantage has analysts thinking dulaglutide may see peak sales of more than $1.5 billion per year.

Over at AstraZeneca, investors should be watching olaparib, a drug for BRCA mutated ovarian cancer that could get EU approval this year, and brodalumab, a drug that is being co-developed with Amgen and is in phase 3 trials for psoriasis.

Since neither of these companies are growing sales or earnings, and neither appears cheap, they are likely both better buys for speculatively oriented dividend investors willing to bet that restructuring and pipelines will pan out, or long-term investors believing the diabetes market opportunity trumps any short-term headaches.