Learn how Kodak plans to become a leader in commercial imaging.

Once regarded as a solid blue-chip company, Eastman Kodak (KODK -4.38%) began to struggle financially in the late 1990s due to a continuous decline in sales of photographic film. Kodak's management failed to identify digital photography as a disruptive technology, and the company eventually ended up filing for Chapter 11 bankruptcy protection in January 2012, and had to sell its photographic film, patents, commercial scanners and even kiosk operations in order to survive.

In September 2013, the company emerged from bankruptcy after exiting several failed businesses. Now, the company has a new business plan, which focuses on commercial imaging and printing, a space where competitors Hewlett-Packard (HPQ -0.83%) and Fujifilm Holdings are quite strong. Has Kodak learned its lesson? How exactly does the company plan to turn losses into profits, and become a leader in commercial imaging? 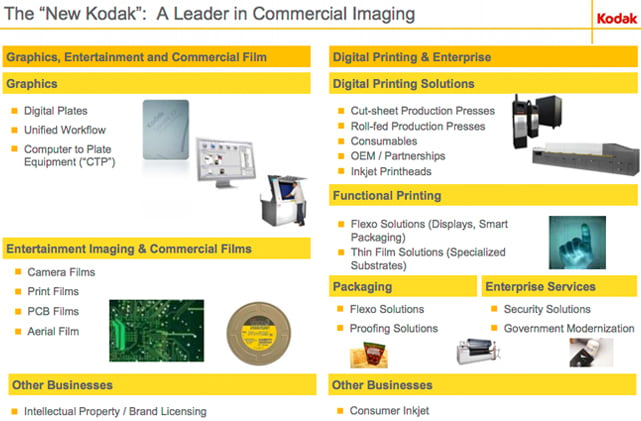 A narrow focus
The new Kodak plans to focus on commercial imaging and graphics, together with providing digital printing solutions to businesses. In the past few quarters, the company exited, divested, or harvested most of its non-core businesses and assets. This allowed the company to eliminate various legacy liabilities, including losses related to Kodak Gallery, which was once the company's consumer online digital photography website and served more than 60 million users at its peak.

Fujifilm Holdings is another important name in the commercial printing space. The company is a leading manufacturer of computer-to-plate systems, which allows printing companies to make printing plates directly from computer data, skipping the film stage. Fujifilm manufacturers offset printing plates in China, Japan, the United States, and the Netherlands.

Innovation and branding
To compete against these giants, Kodak will have to put innovation first. As Forbes contributor John Kotter notes, the company must encourage and welcome pie-in-the-sky ideas.

Note that most of Kodak's patent portfolio has been sold off. However, the company still retains great technology and engineers. For example, a team of more than 100 engineers have worked for more than five years to create Kodak Stream Inkjet Technology, which delivers offset-class output with the ability to perform high-speed, variable-data printing at low cost. More important, Kodak is still a highly recognizable brand.

Early results
It's too early to know if Kodak's new business plan will succeed. The company ended 2013 still in the red. Kodak's overall sales for 2013 came in at $2.35 billion. Revenue for the most recent quarter came in at $607 million, down from $739 million a year earlier. Sales, which fell 12% at the company's graphics, entertainment, and commercial films business, were not enough to prevent a net loss of $63 million.

On the bright side, net loss is down from $402 million a year ago. 2014 will certainly be a key year for the company, and investors should monitor both revenue and profitability figures in detail. The company is not forecasting a major turnaround, and it forecasts sales volume for 2014 in the $2.1 billion-$2.3 billion range.

Final Foolish takeaway
Kodak, once a powerful player in the imaging and photography industry, is trying to recover by narrowing its business focus. The new Kodak plans to gradually become a leader in the commercial imaging industry, a space currently dominated by Hewlett-Packard and Fujifilm. Although the company has made some progress in reducing its net loss per quarter, it's too early to know if Kodak's new business plan will succeed.