A hidden gem?
Most analysis surrounding Apple's stock focuses on the company's two biggest business segments: iPhones and iPads. Together, these segments make up 76%of Apple's revenue. So, it makes sense that the market gives considerable weight to the health of these segments, especially in the near term. But looking out over the next five to 10 years, Apple's iTunes, software, and services business should play a key role for the company.

Why aren't most analysts paying close attention to this segment? Probably because the growth opportunity in this business isn't immediately visible. For instance, Apple's year-over-year growth rates for its iTunes, software, and services business have been steadily declining for several years. 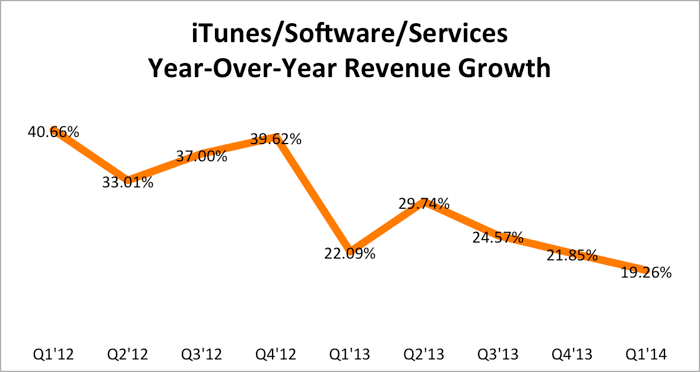 But this trend of declining growth rates may soon stabilize, a closer look reveals.

How is the growth potential hidden? It begins with the way Apple accounts for the revenue within this segment. Apple uses different forms of revenue recognition for different items within this segment. For iTunes music and video, for instance, Apple records gross revenue, yet Apple only keeps a portion of it. For Apple's App store, on the other hand, the company uses the agency model and only books the revenue it actually keeps.

With Apple's iTunes music, which is facing headwinds as a business, reporting gross revenue while Apple's booming app business only reports net revenue, the trajectory of Apple's total net revenue for its iTunes, software, and services segment is understated.

Horace Dediu of Asymco brought some perspective to the understated iTunes business in a February analysis of the segment. He indicated in one of his charts that, under Apple's existing model of reporting, app sales were nearly equal to combined music and video sales. But if all sales were booked using gross revenues, App Store revenues would about triple combined music and video sales. Even more, the segment's revenue for 2013 would be up a sweet 34% from 2012 based on gross bookings.

The App Store is just getting revved up
But there's more. Ben Schachter sees momentous upside potential for further growth in Apple's App Store. As Apple expands into new categories, he explains, Apple's third-party app sales could benefit tremendously. CarPlay, a move into wearables, and a dedicated app store for Apple TV could all help, he says. In particular, however, he sees opportunity with apps for Apple TV.

"The potential for TV-centric Apps could be underestimated in our model. Depending on execution, we think Apple could see TV-centric apps and content ramp quickly," Schachter explained.

Noting Schachter's report, Horace Dediu sent a nod in his direction on Twitter.

Some are waking up to iTunes. http://t.co/GcdYVcZjiC

What does all this mean? As Apple's fast-growing App Store business becomes an increasingly larger portion of Apple's iTunes, software, and services segment, the company's declining year-over-year growth rates for the business may soon bottom out and actually start to accelerate. For investors, this means that five to 10 years from now, Apple's iTunes business could be much larger while also contributing meaningful earnings to Apple's bottom line.