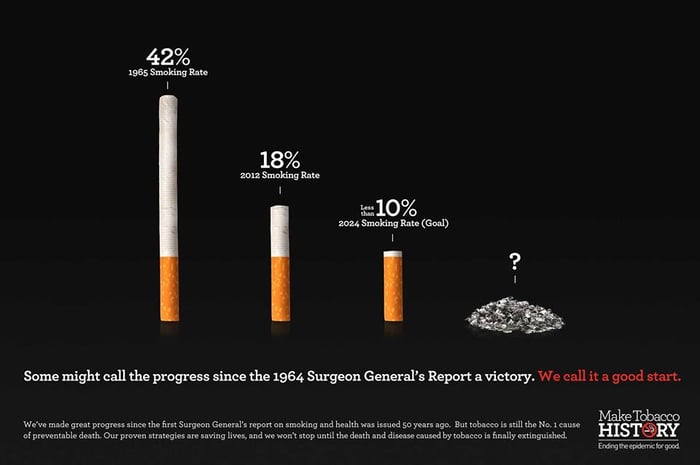 Big tobacco companies such as Philip Morris ( PM -0.57% ), British American Tobacco ( BTI 1.20% ), and Altria ( MO 0.07% ) are paying attractive dividend yields while delivering solid financial performance for investors in spite of falling sales volumes lately. On the other hand, even if we leave all ethical considerations aside, the future looks enormously uncertain for investors in tobacco companies over the coming years.

Smoking hot dividends
Phillip Morris is an industry leader benefiting from a dominant presence in emerging markets and the competitive strengths provided by leading brands such as Marlboro and Phillip Morris. Revenues excluding currency fluctuations increased by 1.9% during 2013 in spite of a 5.1% decline in cigarette shipment volume. Earnings per share adjusted for currency fluctuations grew 8.3% during the year, so Phillip Morris is managing to compensate falling volumes with higher prices and big share buybacks to increase earnings per share.

Phillip Morris has consistently raised its dividends over the last several years, including a big increase of 10.6% announced in 2013. With a dividend yield of 4.6% and a payout ratio below 68% of earnings, the company looks like an interesting candidate for a dividend stock portfolio.

British American Tobacco is a globally diversified company benefiting from several well-recognized brands targeting different segments of the pricing spectrum, including names such as Dunhill, Kent, Pall Mall, and Lucky Strike. Like Phillip Morris, British American tobacco compensated the 2.6% decline in tobacco volume it suffered during 2013 with higher prices and share repurchases, so sales increased by 4.2% and earnings per share grew 9.5% in 2013 when excluding currency fluctuations.

The dividend yield is particularly attractive in the case of British American Tobacco, the company yields more than 6.1% and the payout ratio is still quite safe in the neighborhood of 67% of earnings.

Altria is the leading player in the U.S. tobacco industry thanks to the strength of its Marlboro brand, which, according to management, owns approximately 43.7% of the market and is bigger than the next 11 cigarette brands combined.

Cigarette volume declined by 4.1% during 2013, and revenues net of excise taxes had a marginal decline of 0.1% during the year. But adjusted earnings per share increased by 7.7%, and management is expecting a similar increase of between 6% and 9% in earnings per share for 2014.

Altria looks attractively valued with a dividend yield of 5.3% and a sustainable payout ratio below 69% of average earnings estimates for 2014.

Leaving individual considerations aside, there are some clear trends in the industry. Tobacco volume is falling, but big players are generating sales growth via rising prices, and stock buybacks are having a considerable impact in terms of reducing the amount of shares outstanding and increasing earnings per share.

In addition, big tobacco companies are rewarding shareholders with generous capital distributions and trading at attractive dividend yields, so the bull case for tobacco companies is easy to understand from a financial point of view.

The bear case
Let's forget about the ethical implications of investing in tobacco for a while. Even if there are some major issues to consider from that point of view, it's up to each investor to decide to what degree investment decisions should be affected, or not, by ethical standards.

Tobacco is a heavily addictive substance with devastating health consequences. Smoking causes more than 480,000 deaths in the U.S. per year, this is more than the death toll produced by HIV, illegal drug use, alcohol, car accidents, and fire-arm related incidents combined. According to the Centers for Disease Control and Prevention, more than 10 times as many U.S. citizens have died prematurely from cigarette smoking than have died in all the wars fought by the United States during its history.

Besides, the addictive nature of tobacco makes a big difference in terms of comparing cigarettes against other products with negative health implications, like alcohol and high-calorie food.

Tobacco is very different, though. According to the American Heart Association: "Pharmacologic and behavioral characteristics that determine tobacco addiction are similar to those that determine addiction to drugs such as heroin and cocaine."

The ideal consumption rate when it comes to tobacco is zero, because each cigarette can only alleviate the withdrawal symptoms produced by the previous ones, while at the same time creating the need for more cigarettes in the future. Once the vicious cycle is broken, there is no need to smoke again, and staying completely away from cigarettes is the best thing an ex-smoker can do.

Bottom line
For how long can tobacco companies compensate falling volumes with price increases? Even when selling addictive products, there has to be a limit to pricing power, especially if consumers and governments around the planet are becoming increasingly more conscious about the devastating health consequences of tobacco. I would not want to hold these companies over the next five decades, therefore, I see no reason to hold them for even five minutes.