The new trend for businesses is to look to the cloud for solutions to management problems. As a result, IT budgets are projected to increase significantly in the coming years. In the midst of a growing market, many cloud technology companies are planning to go public. One of the most recent examples is cloud-based payroll and human-capital management solutions provider Paylocity (NASDAQ:PCTY), which went public this month, raising nearly $120 million. It sold 7 million shares for $17 each, when the expected price was $14-$16. Its stock increased by 41% on the first trading day.

Competitors such as Workday (NASDAQ:WDAY) and Cornerstone OnDemand (NASDAQ:CSOD) have also gone public in the past few years and have seen substantial growth. Paylocity is mainly distinguished by its software as a service, or SaaS, model. It provides software and payroll outsourcing to help businesses manage their human capital. It targets mid-sized companies with 20 to 1,000 employees. Note that the market for human-capital management and payroll outsourcing services is expected to reach $22.5 billion this year. In this context, what is ahead of Paylocity's IPO? 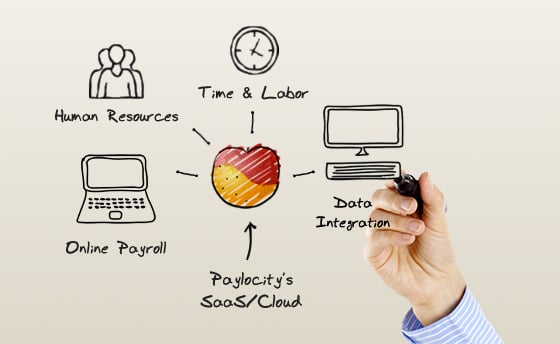 Paylocity has reported profits in the past two fiscal years, a rare case for companies in its sector. Last year, it had a revenue of $77.3 million. Plus, the company is currently expanding its market share and sales, which yielded a 40% increase in its revenue.

Differentiation
The company currently differentiates itself as providing a high-quality service in a simple way. Its business opportunity lies in the fact that it merges the complexity of in-housing with the limited and simple outsourcing solution. Moreover, Paylocity's targeted medium-sized businesses benefit greatly from this simplified, outsourced service, taking into account their limited resources and number of employees.

So far, the company has invested significantly in research and development, which has yielded positive growth results. With the capital raised in the IPO, it shall continue to invest in developing new features for its control panel and expand through business or technology acquisitions. The company has great growth potential, especially if we take into consideration how much its cloud competitors have grown so far.

Competitors
Companies in the general cloud service sector are lately experiencing massive top-line growth. Workday, an on-demand human-capital and financial management software vendor, generated revenue of roughly $128 million in its most recent quarter. However, its bottom line showed a net loss of $47.53 million. This company has experienced impressive growth since its IPO in 2012. However, according to some indicators, it could be overvalued, as it is now trading at 39 times sales.

Cornerstone, a leader in cloud-based talent management software solutions, is going through a similar situation. Its revenue in 2013 was $185.1 million, up 57% year over year. However, the company has constantly seen net losses. Still, the company's shares continue to rise. In 2013, its valuation rose 76% to $2.7 billion. Today, it has reached $2.96 billion, and it continues to grow. Cornerstone has 14 million users, and some of its clients are renowned large multinational corporations.

Final foolish takeaway
Just like its competitors, Paylocity has the potential to grow substantially, even after its successful IPO. The company is taking strong differentiation measures, and it plans to invest more in R&D. These factors will most likely improve the service and overall sales performance.

That being said, high operating costs and eventual acquisitions could deteriorate its bottom line. This pattern is observed quite often among competitors. Yet, the fact that Paylocity has yielded profit in the last two years hints at appropriate management of these costs. As a public company, it will most likely increase its sales, improve its brand, and prepare for long-term growth.