Investors love stocks that consistently beat the Street without getting ahead of their fundamentals and risking a meltdown. The best stocks offer sustainable market-beating gains, with robust and improving financial metrics that support strong price growth. Does Delta Air Lines, (NYSE:DAL) fit the bill? Let's take a look at what its recent results tell us about its potential for future gains.

What we're looking for
The charts you're about to see tell Delta's story, and we'll grade the quality of that story in several ways:

What the numbers tell you
Let's look at Delta's key statistics: 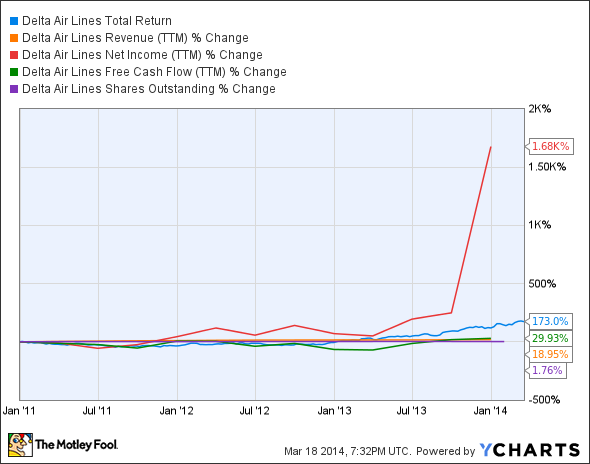 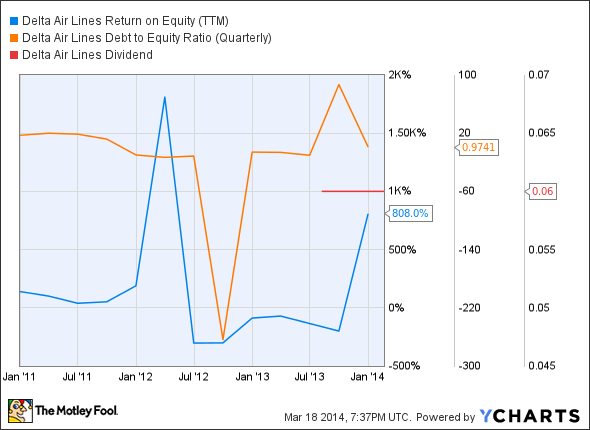 How we got here and where we're going
Delta takes off with the wind at its back here, grabbing seven of nine possible passing grades. The company barely missed out on another pass in revenue growth, and its net income surge left free cash flow in the dust -- both of these metrics could produce passing grades next year, which would give Delta a shockingly unexpected (for an airline) passing grade. Meanwhile, the company's shareholders have enjoyed strong growth over the past few quarters, and the stock has hit new peaks since the last major airline meltdown. Does that mean Delta will keep outperforming in the future? Let's dig a little deeper to find out.

Delta reported market-topping revenue and earnings per share for its fourth quarter, thanks to impressive domestic and international growth coupled with lower fuel prices. Moreover, the company has also slashed its debt load and recently initiated a dividend and a share repurchase program. Fool contributor Mark Holder notes that the company plans to produce at least $5 billion in operating cash flow this year, which will result in roughly $2.5 billion in free cash flow after investing back into the business. Delta already proved it could do that in 2013, as it reached $5 billion in operating cash flow and $2.1 billion in free cash flow for the year.

Delta still holds $9.1 billion in aircraft purchase commitments, of which $6.4 billion will be due over the next five years. That's far lower than the commitments of peers United Continental (NASDAQ:UAL) and American Airlines (NASDAQ:AAL) -- these two carriers will buy $23.9 billion and $35.9 billion worth of new planes, respectively. You can see on the chart below just how much this matters, as it wouldn't take much more in purchase commitments to drop Delta down into negative free cash flow territory -- buying eight or nine new Boeing 787s would be enough.

Last month, Delta reported a 4% year-over-year increase in passenger revenue per available seat-mile, or PRASM, despite (or perhaps because of) thousands of flight cancellations due to Winter Storm Leon. The increase in PRASM resulted from a staggering 21% increase in midwinter travel to Latin America due to inclement weather in the U.S., which might very well be a one-time situation. Delta's fuel prices are expected to decline 8% year over year, and since this is always the largest expense for airlines, the situation is bound to beef up the bottom line. The company also continues replacing 50-seat regional jets with larger and more cost-effective planes. However, Fool contributor Adam Levine-Weinberg points out that Delta, United, and regional airlines Republic Airways and SkyWest are struggling with new FAA pilot regulations that demand 1,500 hours of flight experience for commercial airline co-pilots, a massive bump from last year's requirement of just 250 hours.

Delta will also expand its footprint in Seattle to challenge the dominance of Alaska Air (NYSE:ALK), part of its overall strategy to bring more connecting traffic in-house (Alaska Air formerly managed much of this traffic in Seattle). The company plans to add new or expanded services for 10 routes out of Seattle, reducing a reliance on Alaska Air to get connecting traffic to its international flights. However, Alaska Air has its own expansion plans, and will launch a series of new routes out of Salt Lake City, which could put further pressure on profit margins for already-competitive routes.

Putting the pieces together
Delta Air Lines has many of the qualities that make up a great stock, but no stock is truly perfect. Digging deeper can help you uncover the answers you need to make a great buy -- or to stay away from a stock that's going nowhere.