Another week, another disappointing housing report.

The Commerce Department's survey of new home sales in February was just released (opens PDF), and the preliminary numbers show a 3.3% drop in sales from January and an estimated decline of 1.1% from February 2013. Pair this with last week's housing starts survey, and we have a little more data that showed that housing construction and sales did slow a bit over the winter. The question is, do we have a trend, or just weather? Let's take a closer look at the numbers and talk about the historical averages. While these short-term numbers aren't great, keeping the long-term view in mind is important.

Interest rates up, still historically cheap
Last week, the 30-year fixed rate mortgage was near 4.3%, a 30% increase from last year's record low rates near 3%. The thing is, even after a sharp increase, 4.3% is ridiculously cheap on a historical basis and close to half the historical average of about 8%: Housing prices on the rise as well; also still below the peak 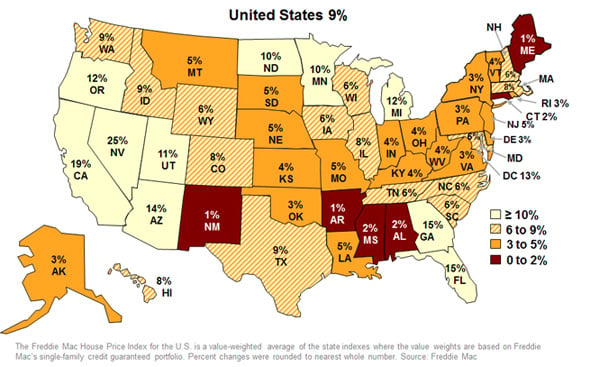 Home prices went  up in every state from 2012 to 2013, as you can see in the table above. Homebuilder Meritage Homes (NYSE:MTH) reported that its average sale price for the fourth quarter of 2013 increased 13% from 2012, and that it has had 11 consecutive quarters of order growth. Will the first quarter of 2014 end that streak? Combined with the increase in interest rates, some have feared we are approaching another housing "bubble" akin to the situation in 2008 and 2009.

However, a little historical context tells us that's probably not the case: 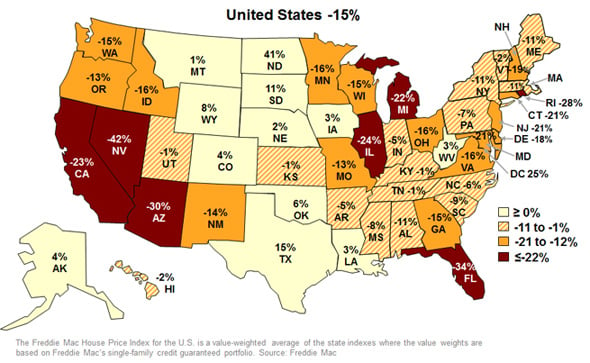 While not necessarily saying that housing is affordable in all areas, the table above does show that home prices in the areas hardest hit by the housing crisis -- Florida, California, and the desert Southwest, as well as parts of the Northeast -- are still well below the levels of 2006. Combine that with interest rates that are 30% below 2006 levels, and housing in many areas is indeed cheaper today than it was seven years ago. Meritage Homes CEO Steven Hilton said this in February:

Our orders and closing volumes grew due to strong demand and a 19% increase in our active communities open at year-end. In addition, rising home prices pushed our total order value and closing revenue to their highest levels in more than five years. ... The homebuilding market strengthened in 2013 as jobs, improved buyer confidence and a shortage of homes for sale drove housing starts higher. We believe market conditions remain positive for continued growth in 2014 and beyond.

Meritage is one of the 10 largest builders in the U.S., and like the rest, it is investing in more land in order to meet what is expected to be a gradual return to normal levels of new home construction over the next several years.

Final Foolish thoughts: A slow recovery is probably a healthier recovery
New Federal Reserve Chairwoman Janet Yellen has made it clear that she will keep interest rates low, and that the Fed will continue slowly reducing its bond-buying program -- known as quantitative easing -- based on the economy and jobs picture improving. Last week, she said the central bank probably wouldn't increase interest rates until after quantitative easing had ended, so historically cheap mortgage rates should remain the norm for at least another year, barring a major uptick in employment or other positive economic activity. In short, that would be a high-class problem to have.

In the meantime, builders such as Meritage Homes continue to report moderately strong demand, and many have said that finding qualified labor could be a real problem in 2014. This could be another high-class problem, as anything that shows demand outpacing supply is an indication of a stronger recovery.