With Microsoft set to announce a version of Office for the iPad, a shift in strategy away from Windows and toward embracing all platforms is underway. While the move may boost sales of iPads at the expense of Windows tablets, maintaining dominance in the productivity software market is far more important for Microsoft.

Shares of Microsoft ( MSFT -1.97% ) were pushed above $40 last week on rumors that the company would soon announce a version of its ubiquitous Office for Apple's ( AAPL -1.17% ) iPad. While Microsoft released iPhone and Android versions of Office last year, both of which require a subscription to Office 365, the iPad has been left out, until now. Along with a revamping of Office Online, Microsoft's free browser-based version of Office, it's clear that new CEO Satya Nadella is serious about changing the way things are done at the software giant.

What this means for Microsoft and Apple
Before the rise of smartphones and tablets, nearly every computing device ran Microsoft Windows. But, that picture has changed dramatically, and without a significant market share in either phones or tablets, Microsoft's share of the total computing device market has declined. 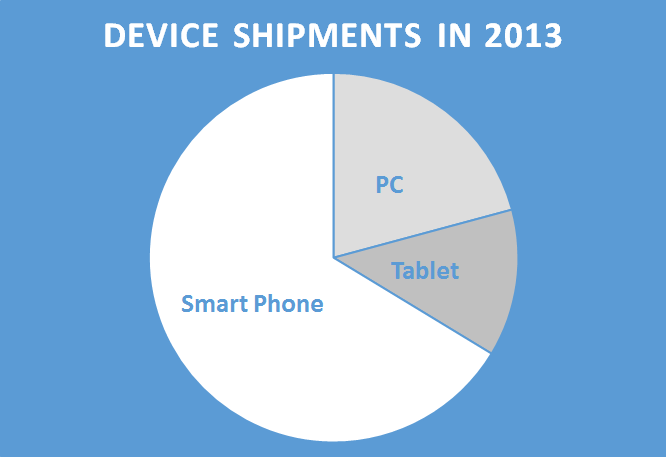 This poses a problem for Microsoft's biggest cash cow, Office. In fiscal 2013, which ended in June, Microsoft's business division contributed $16.2 billion of the company's $26.8 billion in operating profit. That's far more than the $9.5 billion of operating income from Windows, and it demonstrates just how important Office is to Microsoft's bottom line.

With most computing devices today not running Windows, Microsoft runs the risk of losing its dominance in productivity software if it doesn't offer Office on every device under the sun. This is a bit of a double-edged sword, though, as it removes a key advantage of Windows-based tablets. With Office, the overwhelming market leader in enterprise, and with Microsoft pushing Office 365, the company is likely sacrificing Windows tablet sales in an effort to boost Office 365 subscriptions.

This trade-off is worth it, though. The iPad has been making significant headway in the enterprise market, representing more than 90% of enterprise tablet deployments in the fourth quarter, and the lack of Office forces users to turn to an alternative. Apple has its own productivity suite, with Pages, Numbers, and Keynote replacing Word, Excel, and PowerPoint, and the company now gives these away for free. This seems like a bargain compared the the full cost of Microsoft Office, or even an Office 365 subscription, but reviews for Apple's productivity suite are lackluster at best. Pages is rated at only 3.5 out of 5 stars in the iTunes store, for example, and Microsoft Office remains a far more feature-rich and mature option.

With Office coming to the iPad, Microsoft is betting that users will be willing to pay for an Office 365 subscription instead of using free alternatives. This is particularly important in enterprise, where an iPad-optimized version of Office could help swing a company toward choosing Office 365. The loss of a possible Windows tablet sale and the associated Windows license is far outweighed by the Office 365 subscription, especially since it helps maintain Microsoft's dominance in the productivity software market.

Apple has been getting serious about targeting the enterprise and education markets, and the rise of bring-your-own-device has hastened the adoption of the iPad in enterprise. Apple has been improving the process of deploying large numbers of iPads, one advantage that Windows devices maintain, helping the iPad continue to win market share. Its lack of Microsoft Office will soon come to an end, and this should help convince IT departments that the iPad is a viable choice.

Microsoft's move may boost adoption of the iPad at the expense of Windows-based tablets, but this would simply be a continuation of an existing trend. The iPad is already winning in enterprise markets, and fighting this fact by denying the device native Office apps leaves money on the table for Microsoft. Office for iPad is mutually beneficial for both Microsoft and Apple.

The bottom line
Microsoft is no longer a company that ships software solely for Windows, and CEO Nadella is doing the right thing by embracing other platforms in an effort to extend the reach of Microsoft's software and services. Windows and PCs remain important pieces of the puzzle, but with an increasing number of people doing work on mobile devices, Office and other Microsoft software needs to be available. In the long run, expanding and strengthening Office across all devices is the right thing to do for Microsoft.