Telecom companies face a highly competitive market amid the global establishment of 4G, the new generation of mobile ultra-broadband Internet access. The most powerful organizations in this business form a sort of oligopoly, and these currently employ aggressive pricing strategies and acquisitions in order to expand their own market share.

In this difficult context, the world's second largest mobile telecommunications company, Vodafone (NASDAQ:VOD), is not falling behind. Early this year, it sold 45% of its stake of Verizon for $130 billion. This transaction gave the company a huge amount of cash to invest in acquisitions and other expansion strategies to improve competitiveness. Now, it plans to buy Grupo Corporativo Ono, the largest cable operator in Spain, for $10 billion. The acquisition would allow Vodafone to gain approximately 1.9 million customers in Spain. This could also trigger a wave of merger and acquisition activity across Europe. So, why is Vodafone making this move? 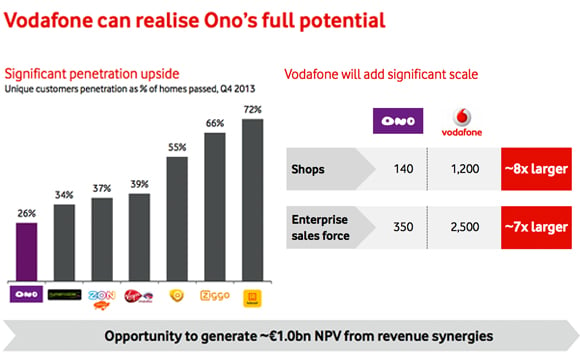 Full expansion
Last year, Vodafone started Project Spring, an investment program designed to improve the quality of its network and services in Europe and emerging markets such as India and Africa. To carry out this project, Vodafone partnered with tech companies such as Huawei, Ericsson, and NSN. The company also acquired a controlling stake in Kabel Deutscheland Holding, the largest cable television operator in Germany, for more than $10 billion, and will use the company as its central fixed-business in Germany.

So, buying Ono is just another expansion move in Europe. The acquisition will allow Vodafone to strengthen its presence in Spain, which is experiencing fast macroeconomic recovery; in the final quarter of 2013, Spain's economy grew at its fastest pace in almost six years. Note that Ono's acquisition is in line with Vodafone's agreement with French-based telecom Orange to build fiber networks in Spain.

Great stand-alone business
As a stand-alone business, Ono is quite attractive. As Spain's largest next-generation network, Ono's network is available across 13 of Spain's 17 regions. Significant scale advantages allowed Ono to enjoy a 42.6% EBITDA margin in 2013.

But, Ono is not only big, it is also one of the most modern networks in Europe. The company started building its next-generation network in 1998 and has, so far, invested roughly $9.6 billion in developing a future-proof network covering 41% of Spanish homes. Ono's scale and technological advantages should allow Vodafone to benefit from various cross-selling and up-selling opportunities.

Competitors
Through its planned acquisition of Ono, Vodafone will inevitably face the Spanish telecom giant Telefonica SA (NYSE:TEF). This company has a strong presence in both Latin America and Spain. However, it has gone through difficult times since Spain's 2011 crisis.

Recently, it seems like Telefonica is recovering. A few weeks ago, the company revealed that its net profits have grown by 17% and it is surpassing its debt reduction objectives. Its 2013 revenue showed a year-over-year 0.7% growth in organic terms, plus 1.8% yearly increase in the fourth quarter.

In Germany, Vodafone will confront another giant, Deutsche Telekom (NYSE: DT). The German company, owner of T-Mobile, saw profit in 2013 after a period of net losses. Most of its sales came from the U.S.

Final foolish takeaway
To continue expanding its European operations, Vodafone is buying Ono for roughly $10 billion. As the largest next-generation network in Spain -- which is quickly recovering after the country's 2011 crisis -- Ono will provide Vodafone with scale and technological advantages. Note that Vodafone's latest acquisitions also expose the company to huge competitors such as Telefonica in Spain or Deutsche Telekom in Germany. Finally, the move could trigger a wave of merger and acquisition activity across European telecoms interested in gaining scale advantages to remain competitive.