Wells Fargo (NYSE:WFC) made a big announcement last fall -- and investors who've forgotten it may be missing out on the potential for big returns.

"We are delivering on our strategy to expand our credit card business," noted the Chairman and CEO of Wells Fargo John Stumpf, in the announcement of the partnership. "Our goal is to offer Wells Fargo customers a suite of cards that help them meet their financial goals. We're proud to have American Express as a partner in this effort – a great company with a proven brand for customer service."

And while Bank of America (NYSE:BAC) is largely the dominant bank in the credit card industry -- it added a staggering 3.9 million new credit card accounts in 2013 alone -- this move at Wells Fargo could mean big things for it and its investors.

The dramatic difference
At the end of 2013, Wells Fargo reported it had watched its credit card loans outstanding grow by 9%, or $2.2 billion. By comparison Bank of America watched its loans fall by $2.9 billion. However it is critical to note Bank of America has a staggering lead in the actual amount of credit card loans that are extended, as it had a nearly four times higher number: 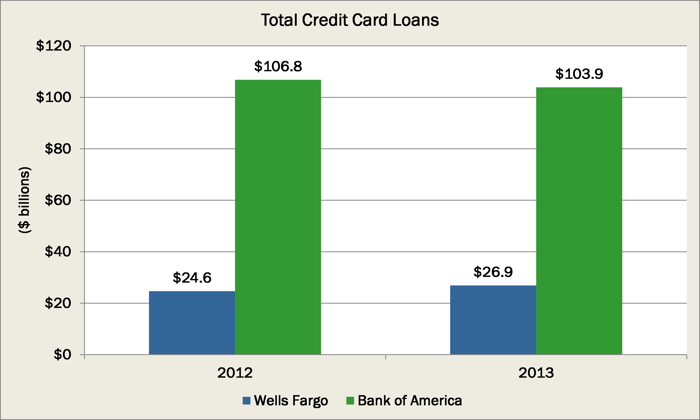 Yet one of the most curious things about the Wells Fargo credit card portfolio is while it is often perceived to be the safest bank around with the least risky asset base, it brought in a staggering $3.1 billion in interest income on its $27 billion of credit card loans, meaning those loans had a yield of 12.5%. By comparison Bank of America earned $10 billion from its credit card portfolio with an average yield of 9.9%.

And while that doesn't sound like a wide disparity, had Bank of America been able to earn at 12.5%, it would've meant an extra $2.6 billion to its bottom line.

Why it matters
At a recent presentation to investors, the CFO of Wells Fargo, Tim Sloan, provided the following charts which provide unique insight into just how well the credit card business at the bank is doing: 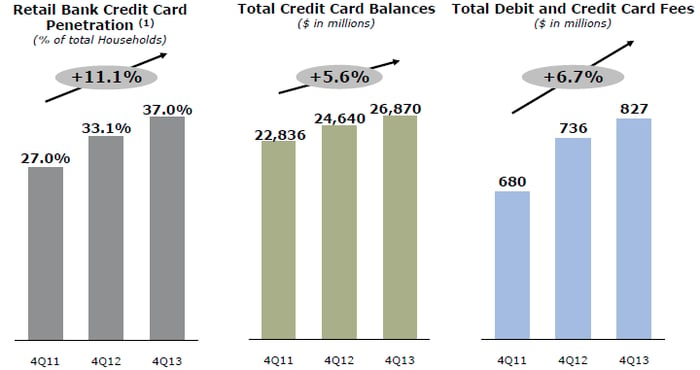 As you can see, it has done remarkably well at growing this pivotal business since the end of 2011, and 2014 is seemingly poised to be another year in which the growth continues.

Wells Fargo has long been a model of both success and safety in the banking industry, and it appears its newest efforts to expand into the credit card landscape could only be further evidence of this reality. With the partnership of American Express to soon be rolled out in its fullness, it could mean big things to the bank and its bottom line.