Often invisible and sometimes deadly, industrial gasses can seem a bit ominous. But could these gasses help breath some life into your portfolio?

Why invest in industrial gas?
Industrial gas is used in numerous applications. In fact, certain sectors with one foot firmly in the future could not exist without them. Computer chips, health care/biotechnology, aerospace, chemicals, water treatment and refining are all dependent on industrial gasses in one way or another. As these industries progress and grow so will the demand for industrial gases used in their applications.

Founded 107 years ago, Praxair (NYSE:LIN) is one of the largest industrial gas suppliers in the world and the largest in North and South America. Its 2013 full year report showed record earnings and cash flow as well as other impressive numbers.

In 2013, Praxair delivered record operating cash flow of $2.9 billion that represented about 25% of sales. Sales and earnings grew 8%, excluding negative currency translation effects, in a global economy that has only shown modest recovery. Operating margin was a strong 22%. We completed three world-scale steam methane reformers for hydrogen supply to refineries under long-term contracts. In 2014, we expect the global economy to continue to grow at a modest pace, in-line with recent sequential trends.

But maybe it's worth the extra bit of money when you consider that it has outpaced the industry in dividend increases and earnings growth. Add industry-beating ROA and ROI and this stock isn't looking quite as expensive.

The smallest of the three companies discussed here is Airgas (NYSE: ARG), with an $8 billion market cap, about one fifth the size of Praxair. But this small company has some big customers like First Solar, a leading U.S. solar panel producer. In fact, 98% of its revenues are generated in the U.S., so if you believe in the resurgence of domestic manufacturing and industry this could provide some broad exposure.

With a smaller company that is involved in a capital-intensive industry one might expect capital expenditures to be on the high end, but Airgas' capex has stalled recently. 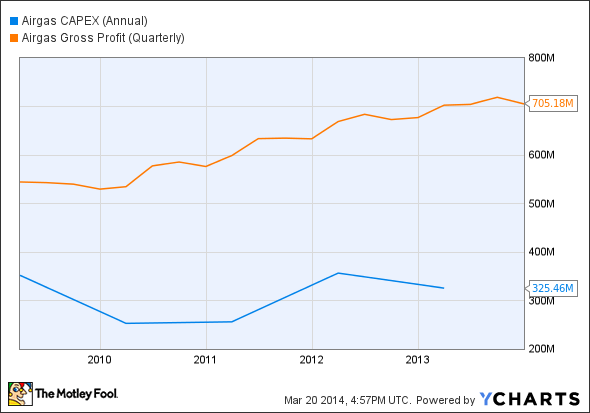 While profits are up over 25% in a five year period, capex is down almost 10%. A company that doesn't reinvest in its future will soon reap what it sows, so a slowdown in spending could be perceived as a red flag in the long-term investing playbook.

While the $600 million stock buyback last year helped buoy the price, some believe it would be more advantageous to use the strong free cash flow position to focus on growth rather than raise the dividend or continue share buybacks.

The last company discussed here is Air Products and Chemicals (NYSE:APD), a position that Bill Ackman has been touting since Pershing Square Capital Management became the largest shareholder at 9.71%. Currently trading around $120, Ackman believes "this is a $200 plus stock over the next three years with new management."

It's no secret that Ackman has fallen on hard times with misguided bets on J.C Penney and Herbalife, and this could be the next over-hyped position. Air Products and Chemicals is currently looking expensive to other stocks and poised to underperform according to analysts.

It's currently trading at a 26 P/E, compared to the industry average of 18.40, which is a premium of over 35%. So is it worth it? The answer is no. Compared to industry averages, Air Products has a lower yield, a higher payout ratio, a greater P/S and P/B, and a lower ROI. However, there are a couple highlights, including better than average margins and less debt. But those are hardly enough to entice.

Final thoughts
While the industrial gas sector looks promising, one must take care in choosing investments. Air Products looks overvalued, and Airgas looks to be headed for a stall unless capex picks up. While you are paying a bit of a premium for Praxair, it would seem that holds the most potential of the three discussed here based on valuation and growth potential.