Newspapers' demise can be blamed on many things related to the Internet: Craigslist stealing classified ad revenue, online sites delivering information faster and reducing the value of a subscription, and the tendency for society to flock to shocking images and simple headlines that the Internet excels in and traditional newspapers shun.

However, as the first wave of dead papers finally start decomposing in their graves, it's now up to the survivors to maneuver a new digital strategy that embraces not only the Internet, but the constantly dynamic way we consume content -- currently through mobile devices.

If you run a newspaper, you might think that once you've finally created a mobile application across all platforms, you're set. However, that might not be true, as two preeminent papers demonstrate just one pitfall awaiting these harried survivors: app stores. 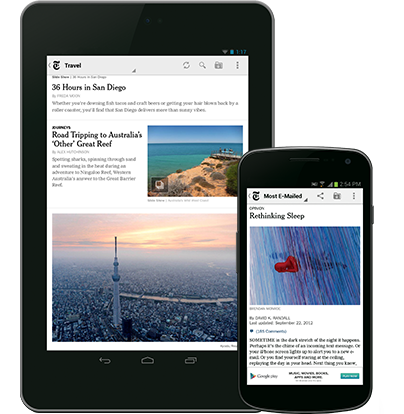 Apple, Google, and to a lesser extent Microsoft each run app stores to support an ecosystem around their software and devices, and they take a 30% cut from any sales made through their stores. While access to such a distribution network could make fantastic sense for a small developer or company, a newspaper giant with brand recognition might just be losing out on potential profits, and a sustainable business model.

Which leads us to two different strategies:

What's been the right strategy so far? 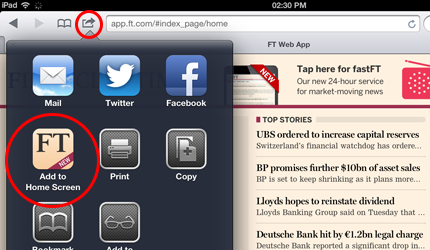 Instructions for adding a shortcut to the Financial Times web app on an iOS device. Source: ft.com.

And despite skirting the usual app store route, readers still find and use the newspaper's mobile application. From last July's interim report, mobile readership accounted for "over half of all FT.com subscriber consumption, more than a third of total page views, and 24% of new digital subscriptions." The company added 99,000 digital subscribers last year, and if we extrapolate that roughly 25% of those came from mobile users, at roughly $40 per month, that's an additional $12 million per year in reoccurring revenue -- just through mobile-based subscriptions.

If Financial Times had to send 30% of that to Apple, Google, or Microsoft, it would only have booked $8.3 million in revenue. For the FT Group segment of Pearson, which only brought in $77 million in operating profit in its fiscal 2012, that 30% would have been a huge hit. And as mobile-based consumption, and likely subscriptions, increase, the decision to circumvent app stores is proving to be a slick move.

Polished publishing
On the other side, The New York Times had 730,000 print subscribers in 2013, down from 1.1 million subscribers in 2006. In 2006, The New York Times had an online service called TimesSelect, available to home subscribers as well as on its own that offered premium features like archives access. That year, they had 627,000 TimesSelect users, but only 34%, or about 210,000, purchased it on its own without a print subscription. Now, the company claims 760,000 digital-only subscriptions.

However, because the mobile application exists within app stores, it shells out 30% of the revenue to the tech companies. This means it would have only brought in $3.8 million in new revenue per year from new digital subscriptions, as $1.6 million would be paid out to Apple, Google, or whomever runs the platform.

Now, The New York Times digital editions still brought in $149 million in fiscal 2013, up from $109 million in fiscal 2012. But as this number increases, a larger dollar sum will end up outside of its balance sheet onto app store providers. And as this is the only growing segment for the company, compared to print circulation or advertising, the future of the company will depend more and more on this revenue stream.

Both have succeeded...for now
Both newspapers have been successful in capturing the value of their product in digital form, and these revenue streams are helping steady their balance sheets and futures. But, as readers and revenues trend toward mobile-only experiences, newspapers might want greater control of their apps outside of app stores, like what the Financial Times has delivered. Otherwise, a strategy like The New York Times might be hobbled by its app store fees.