However, Lantus' market dominance in diabetes -- its sales outpace therapies from Novo (NYSE:NVO) and Eli Lilly (NYSE:LLY) -- may wane given patent protection for the compound expires in 2015. To blunt the expiration impact, Sanofi is developing U300, a Lantus successor that is posting solid results in late-stage trials. 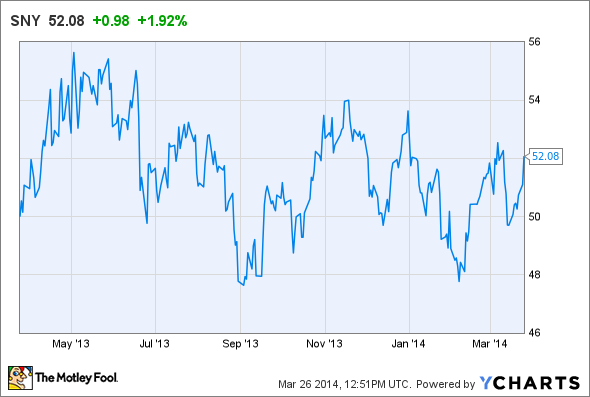 Targeting a big and growing market
The market for diabetes treatment is massive. More than 365 million people worldwide suffer from the disease, roughly half of whom are unaware they have it. The vast majority -- nearly 80% -- of diabetics live in low and middle income countries, which means roughly 70 million diabetics live in developed countries with established access to therapies like Lantus.

The enormous size of the diabetes market makes it the biggest in terms of spending. According to Express Scripts' Drug Trend Report, $79 per member per year was spent by payers on diabetes therapy in 2012. That's nearly 20% more than was spent on cholesterol treatments -- the second highest disease in terms of treatment cost.

Spending on diabetes therapies is expected to climb significantly over the next 20 years given the global population of diabetics is estimated to eclipse 550 million by 2030. That represents a large market opportunity for new treatments, especially when investors consider Lantus' megablockbuster status reflected just 7% of all diabetes spending in 2012.

The next generation of diabetes drugs
Drug developers are advancing a series of next-generation diabetes therapies designed to better control blood glucose levels. While the opportunity for this new class of drugs is big, these new therapies don't pose much of a direct threat to Lantus.

GLP-1 drugs mimic or encourage activity of a key hormone released by the intestines to promote insulin production that helps regulate blood glucose levels. GLP-1 drugs include Novo's Victoza and AstraZeneca's (NASDAQ:AZN) Byetta and Bydureon. Novo's Victoza, approved in 2010, is already producing $300 million in quarterly sales for Novo, and AstraZeneca's sales of Byetta and Bydureon totaled about $1 billion in 2013.

SGLT2 drugs target the SGLT2 protein in the kidney responsible for aiding in the reabsorption of glucose. By blocking the kidney's ability to reabsorb glucose, drugs like Invokana and AstraZeneca's Forxiga help blood glucose levels fall given more glucose is eliminated through patient urine. Industry watchers think Invokana, which won FDA approval a year ago, could eventually achieve peak sales of more than $2 billion. AstraZeneca's Forxiga, which won the FDA green light in January, will battle for market share this year, too.

Since GLP-1 and SGLT2 drugs work differently than long-acting insulin, they're often prescribed alongside, rather than instead of, Lantus.

Replacing Lantus
Lantus' upcoming patent expiration is increasing the pressure to launch a successor, and Sanofi hopes that successor will be a new and improved version of Lantus named U300.

Sanofi has been conducting late-stage trials comparing U300 against Lantus in an attempt to prove U300 is as good as -- and safer -- than Lantus.  So far, results have been solid.

Those results were confirmed in December when Sanofi reported 23% fewer patients taking U300 had low nighttime blood sugar levels than those taking Lantus. The study also showed U300 did a better job controlling blood sugar levels in the daytime, too.

Fool-worthy final thoughts
Sanofi filed a lawsuit to block Lilly's Lantus biosimilar in January. That bought U300 more time to win approval and garner market share given Lilly's copycat will likely be delayed by the suit until at least 2016.

Sanofi expects to submit U300 to U.S. and EU regulators for approval in the second quarter, suggesting U300 has an opportunity to start adding meaningfully to Sanofi's results in 2015. That won't give U300 much time to gain a foothold before biosimilars arrive, but since U300 patients appear to have fewer glycemic events, I think that there's a good chance doctors will embrace it, and the Lantus revenue stream will be protected.