Please ensure Javascript is enabled for purposes of website accessibility
Free Article Join Over 1 Million Premium Members And Get More In-Depth Stock Guidance and Research
By Justin Loiseau - Mar 27, 2014 at 11:55AM

Initial jobless claims fell 3.1% to 311,000 for the week ending March 22, according to a Labor Department report released today.

After edging up a revised 1.9% the previous week, analysts were pleasantly surprised by this latest report, having predicted 323,000 new claims. This is the lowest reading in four months. 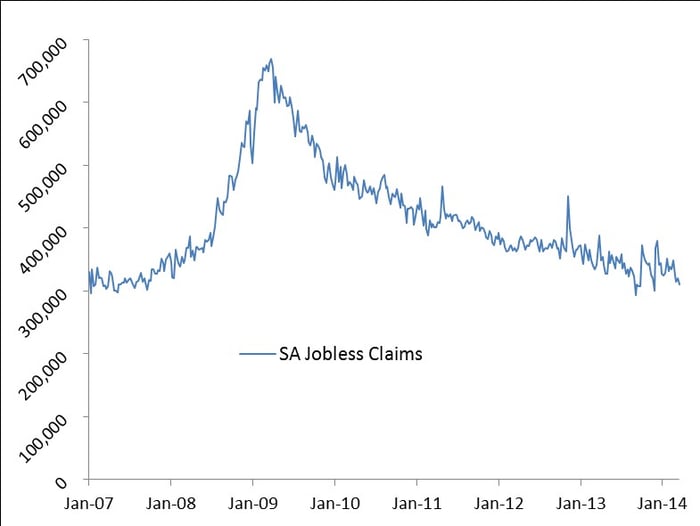 From a more long-term perspective, a 2.9% drop in the four-week moving average to 317,750 initial claims marks the fourth straight decline and a new six-month low. Both the latest week's claims and the four-week average fall significantly below 400,000, a cutoff point that economists consider a sign of an improving labor market.

On a state-by-state basis, seven states recorded a decrease of more than 1,000 initial claims for the week ending March 15 (most recent available data). Pennsylvania (-3,170) and Illinois (-2,320) saw the largest improvements, due primarily to fewer construction and administrative services layoffs.

For the same period, only California and Nebraska registered increases of more than 1,000 initial claims. California saw a 3,190-new-claim increase due mostly to service and retail layoffs, while Nebraska provided no comment for its 1,050 bump.