Investors shouldn't buy and sell shares on market whims and whispers. After all, markets can jump up and down when we least expect it, and that means the chances for predicting its direction over a short period of time is a coin flip, at best.

Instead, investors should take a long-term view when evaluating companies, and consider whether these companies have a competitive advantage that can be leveraged for market share and shareholder-friendly profit.

Using that approach can turn investors on to exciting new companies that are innovating, and give investors a chance to take advantage of the market's inevitable drops to buy for the long haul. Given that backdrop, investors may want to turn their attention to Seattle Genetics (NASDAQ:SGEN) and Phamacyclics (NASDAQ: PCYC), two biotechnology companies with impressive cancer-fighting therapies. 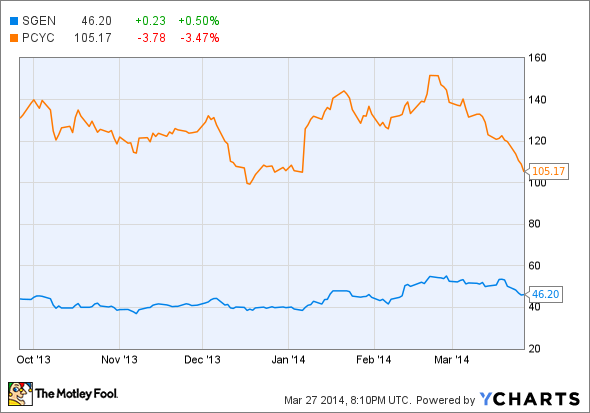 Adcetris is currently approved as a treatment for relapsing, post chemotherapy Hodgkin's lymphoma, or HL, patients. It's also approved as a second-line treatment for anaplastic large-cell lymphoma, or ALCL. The drug has already captured 70% of those markets, but expanding its use in Hodgkins' from a third-line therapy to second-line one would significantly boost its addressable market.

In addition to the opportunity to expand Adcetris' use in HL, Seattle is also studying Adcetris in large B-cell lymphoma, or DLBCL, for which the company received FDA orphan designation last year, as a frontline drug for mature T-cell lymphoma, or MTCL, and relapsed cutaneous T-cell lymphoma, or CTCL. Across its various potential indications, Seattle estimates Adcetris could be a $1 billion-a-year drug.

That alone could make for a compelling argument for owning Seattle's shares, but a much larger market may exist in leveraging the company's antibody drug conjugate, or ADC, technology that delivers Adcetris to its target.

AbbVie has already expanded its agreement with Seattle for use of that ADC technology twice since 2011, including in January when it agreed to pay Seattle up to $255 million per research target for therapies successfully incorporating it. Last summer, Bayer inked a similar deal with Seattle, agreeing to pay up to $500 million in milestones for treatments using Seattle's ADCs.

2. Pharmacyclics
Much like Seattle, Pharmacyclics has an impressive cancer-fighting drug in Imbruvica that has big time potential to treat a variety of indications. The company co-developed Imbruvica with Johnson & Johnson (NYSE:JNJ), and Johnson has been so convinced by Imbruvica's potential that it's already handed over $385 million in milestone payments to Pharmacyclics, including $110 million in the fourth quarter alone.

Currently, Imbruvica is approved as a second line therapy to treat mantle cell leukemia, or MCL, and chronic lymphocytic leukemia, or CLL. The standard of care for CLL patients is chemotherapy and immunotherapy. However, studies suggest Imbruvica could someday replace side-affect laden chemotherapy in those patients.

In addition to its potential in CLL, Pharmacyclics and Johnson are also studying Imbruvica's use in large B-cell lymphoma, multiple myeloma, follicular lymphoma, which is a common form of intolerant non-Hodgkins, and Waldenstrom's, which is a less common non-Hodgkin's lymphoma. That potential to significantly expand Imbruvica's label has Industry analysts thinking the drug could someday hit peak annual sales of $6 billion.

Fool-worthy final thoughts
It's hard to make an argument that shares in either company are inexpensive, given that Adcetris is Seattle's only marketed drug, and the company's current $5.6 billion market cap dwarfs Adcetris' current sales. Similarly, Pharmacyclics' $7.9 billion market cap is pretty heady if you're only looking at the $410 million Wall Street currently expects in revenue this year.

That said, both of these companies have irons in the fire and competitive advantages that may warrant a premium valuation, because they may drive sales significantly higher. That potential for growth is a key reason why shares in both companies were hitting new highs at the end of February. Shares in Seattle have dropped 13% and Pharmacyclics' shares have slumped more than 20% since then. That may suggest it's a good time for speculative growth investors to consider these two for the long term.