Despite its many accolades, Tesla Motors (NASDAQ:TSLA) still faces difficulties. Combined with a soaring stock price, many think it has reached speculative levels. Before we get to that, some context is in order.

Operational realities bite
California-based Tesla has grown into a $32 billion car manufacturer. According to Bloomberg, the company sold over 22,000 vehicles in 2013. Tesla's most recent annual report shows the company had $2 billion in revenue and lost $74 million for the year.

While many see Tesla as a burgeoning technology start-up, the company is not a baby. Tesla's been around since 2003, it's raised many rounds of capital, and its products have been in the market for some time. After a decade of operations and thousand of cars sold, the reality is that Tesla still operates at a loss.

Formidable competition
Meanwhile, Tesla competes in a mature industry against large and formidable adversaries. Consider Japanese giant Toyota (NYSE:TM). Toyota's 2013 fiscal year end doesn't end until March 31st, but according to Yahoo! Finance, it generated $317 billion of revenue and over $23 billion of net income on a trailing twelve-month basis .

It introduced the first mass-produced electric-hybrid (the Prius) in 1997. Looking ahead, Toyota plans to introduce a hydrogen-powered "fuel cell" vehicle, which according to Toyota's website, will be available by 2015.

Another competitor, closer to home, is Michigan-based General Motors (NYSE:GM). While General Motors had well-known problems, the company has restructured and returned to profitability. GM generated over $155 billion in revenue and $3.77 billion in earnings in 2013. GM showed that it was still in the race for next-generation automotive technology when it introduced the Chevy Volt in 2010.

Figure 1 below compares revenue for Toyota, General Motors, and Tesla. 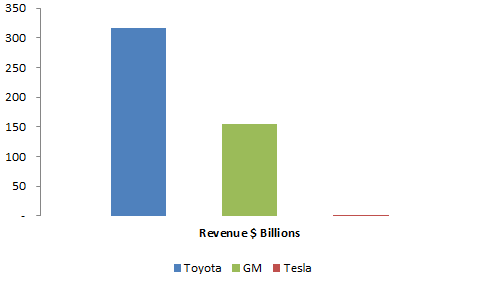 In Tesla'a favor
Despite the challenges, there are a couple of things that should work in Tesla's favor. First, according to Tesla's CEO Elon Musk, the company's strategy is to sell fewer expensive cars initially and sell a greater number of cheaper cars as production costs decrease.

In other words, Tesla was smart to "start at the top," because it's easier to move down into lower-end markets than to move up. The wheels are already turning as Tesla is preparing to introduce its lower-end Model E. That means Tesla is only getting started in terms of sales.

That brings up the second point -- scale. Tesla's problem seems to be that operating costs per car are too high. With scale, that could change. For example, think of how the cost for operating a plant is spread across more cars with each additional unit sold.

In addition, as technology matures, the costs of inputs could decline. For example, one of the most expensive parts of a Tesla is the lithium-ion battery pack. According to Morgan Stanley, Tesla seeks to lower the cost of it's batteries down to $200 per kilowatt-hour. This is significantly lower than the current industry average, which according to business advisory firm AlixPartners LP, is about $400/kwh.

What this means for Tesla stock
At over $220 per share, Tesla is relying heavily on expectations of what could happen. With that in mind, it's helpful to estimate how realistic those expectations are. To do this, I'll use a simple cost, sales, and earnings scenario using a few assumptions.

In Figure 2 below, notice the change in earnings as battery costs fall to $300 / kwh  (all else equal of course). At $200/kwh, Tesla's price-to-earnings ratio could fall to 47, which isn't unreasonable for a high-growth technology leader. Keep in mind this doesn't account for sales beyond 55,000 units, which Tesla could exceed based on its sales trajectory.

Clearly, this cost reduction won't happen overnight.  According to Pike Research, battery costs should fall at about 10% per year for the next three years, then accelerate due to scale. At that rate, $300/kwh would be attainable in three years, and  $200/kwh would not be far behind.

The bottom line
Clearly, there are variables that we have not considered and Tesla still faces many challenges. However, based on current sales and cost expectations, profitability is within reach and Tesla may even be reasonably priced. Of course, that's not saying Tesla's stock is cheap.

In the simple example above, a P/E of 47 is obtained if earnings grow and Tesla's share price remains flat (or grows less). In other words, Tesla's current price already reflects expected growth. At the end of the day, Tesla's stock is cheap if you think $220 per share still underestimates Tesla's growth. And that much, we can say, is certainly speculative.