It's no secret that retail is changing. Among those segments facing an uphill battle in their struggle to survive are electronics, bookstores, and even some department stores. But office-supply may be the first of the herd to go extinct. Store closures are abounding as key players look to new strategies to guide them in the future.

In a move to cut costs and consolidate, Office Depot (NASDAQ:ODP) merged with Office Max in November. The retailer still reported a loss for the year, however, and failed to beat earnings estimates in each of its last four quarters. The company has also seen 13 straight quarters of declining same-store sales.

Staples (NASDAQ:SPLS), the leader of the office-supply pack also seems to be facing the music. In its fourth-quarter earnings report earlier this month, the company posted its seventh straight same-store sales decline and shares dropped 15%, approaching a 5-year low, an ignominious feat given that the market has just completed one of its best five-year runs in history. In fact, Staples stock is actually trading below where it was during the recession's bottom. The chart below shows the disparity: 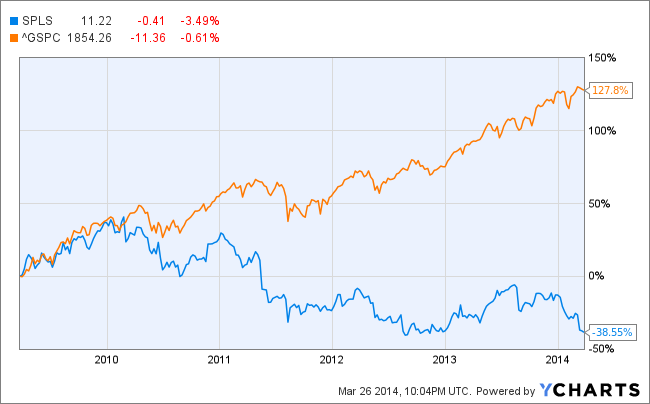 Death by a million paper cuts
The culprit here is obvious. Staples' revenue over the five-year period has actually fallen 4%  , while Office Depot's is down 22% as many of their core products have become obsolete. Demand for paper products, office supplies, and electronics such as printers has waned as technology advances, and new gadgets like tablets and smartphones have proliferated. While Office Depot chose to merge with Office Max to stay alive, Staples has chosen a different strategy. In its latest quarterly report, CEO Ron Sargent explained, "A year ago, we announced a plan to fundamentally reinvent our company. With nearly half of our sales generated online today, we're meeting the changing needs of business customers and taking aggressive action to reduce costs and improve efficiency."  Online sales were a rare bright spot as revenue through the channel grew 10% in the quarter.

Management's turnaround plan includes closing 225 stores of its about 1,500 locations in North America over the next two years and downsizing its remaining outlets to a 12,000 square-foot format. However, Sargent has no desire to jettison the brick-and-mortar business, calling it "an important differentiator versus the competition." But the kicker seems to be the retailer's "Make More Happen" strategy, designed to make the company a "destination for every product businesses need."

A quick scan of Staples' website reveals a strategy targeting specific business owners with products such as muffin tins, massage tables, and stethoscopes for small businesses as specific and diverse as bakeries, spas, and medical clinics. But it's hard to imagine a doctor running in to pick up stethoscopes, or a baker purchasing start-up supplies at Staples the way an individual might run in for office supplies. Business owners want suppliers that specialize in their business, with a wide variety of inventory, and expect products to be delivered quickly, often overnight. In other words, Staples is going from a competitive advantage to a competitive disadvantage. Its former success lay in its ability to carry inventory that was all directed at a similar purpose-office supplies. An office manager or individual looking to stock a home office could drop in and pick up everything they needed. By branching out and becoming a supplier of multiple businesses, Staples is likely to have inventory management problems and additional expenses associated with it. Furthermore, it no longer has the advantage of being a specialist, another weakness with consumers.

Office Depot, on the other hand, said it expects $600 million in annual synergies by 2016 from its merger with Office Max, and promised $140 million in adjusted operating income this year as it closes down stores. Still, the retailer forecasts lower sales, saying, "market trends remain challenging across our product lines and distribution channels."  In other words, don't expect organic growth anytime soon.

Toner low
It's worth remembering that unlike some other struggling retailers such as J.C. Penney and Radio Shack, Staples is still profitable, and Office Depot was close to breakeven in 2013 and expects to see a profit this year. But with macro headwinds against the industry continuing and sales falling, it seems too foolish to bet on these stocks recovering. Staples has been kind to shareholders with a share repurchase plan and a dividend that now yields 4.2%, but those programs will likely come into jeopardy as profits slim. In its past year, dividends and share buybacks gobbled up more than 100% of net income and more than 85% of free cash flow.  Office Depot may not face the same risk, but its projected $140 million in adjusted operating income this year does not seem like enough to justify a market cap above $2 billion.

Office Depot's merger and Staples' "Make More Happen" strategy look like white flags. The retailers know they can't survive under their old format, but their new directions seem questionable. A merger will not save a company in a dying industry, and Staples can't make itself all things to all businesses. For investors, the risks here simply far outnumber the rewards.