Recently one of my Twitter followers asked me to shed some light on LINN Energy's (OTC:LINEQ) debt-to-EBITDA ratio and whether that ratio was cause of concern. So let's drill down into LINN's debt, along with that key ratio, to see investors in LINN or LinnCo (NASDAQ: LNCO) might have cause for concern.

As of the end of last year, LINN Energy had about $9.2 billion in debt outstanding. That sounds like a lot, but it's not unreasonable for a company that has acquired $14.3 billion in oil and gas assets over the past few years. Furthermore, given its $9.2 billion market cap, the company's total enterprise value is split evenly between its debt and equity. To some that's high, but for a master limited partnership it's a pretty reasonable ratio. While a 60/40 ratio would be more ideal, a lot of that has more to do with the recent weakness in LINN's unit price than a deterioration in credit quality.

As the following slide shows, the company's capital structure doesn't hold any real major debt maturities until 2019 other than the credit facilities. 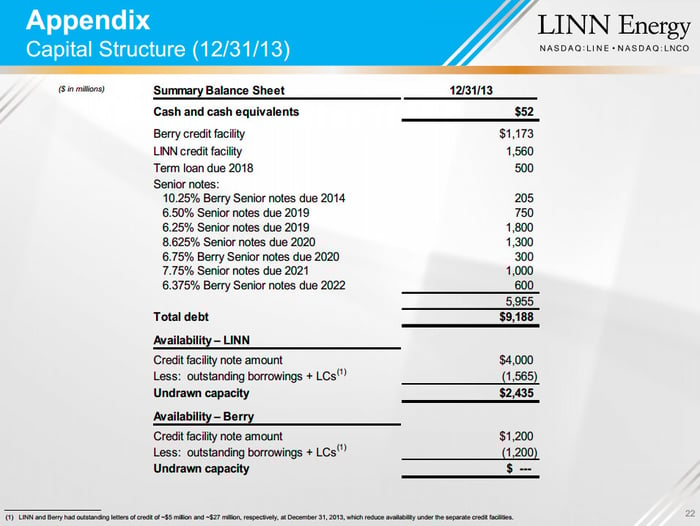 From this slide we also see that the LinnCo-led deal to buy Berry Petroleum added three senior notes to LINN's capital structure, with a small $205 million note due this year. Given that LINN has more than $2.4 billion of undrawn capacity on its credit facility, there aren't any near-term liquidity issues.

That said, the only number of concern here is LINN's total outstanding debt, which again is roughly $9.2 billion. Another other important number is the interest expense the company pays to hold that debt. LINN Energy estimates this to be $534 million for 2014. Those numbers will be important for the debt metrics we'll look at next.

What's LINN's ability to pay its debt?
The other side of LINN's debt equation is its cash flow, which is critical to the company's ability to pay the interest on that debt. The company's adjusted EBITDA guidance for 2014 is $2.3 billion, which covers the $534 million in interest expenses, $802 million for oil and gas development costs to keep production flat (aka maintenance capital costs), $961 million in cash distributions paid to unit holders, and another $12 million in excess cash flow.

What's abundantly clear is that LINN Energy can easily meet its debt obligation, as the $534 million of interest expenses is dwarfed by $2.3 billion in cash flowing into the business. This guidance provides LINN with a debt-to-adjusted EBITDA ratio of roughly 4.0 times, which is in the safe range.

How much is too much: MLP Debt 101
As fellow Fool Amiee Duffy pointed out in an article last year, in order to be rated investment-grade MLPs need to keep the debt-to-adjusted EBIDTA ratio no higher than 4.0 to 4.5 times. LINN meets this criteria, though it is on the higher end of its peer group. BreitBurn Energy Partners (OTC:BBEPQ), for example, projects its debt-to-adjusted EBITDA ratio at about 3.74 times in 2014.

Most of LINN's peers are committed to getting that ratio much lower. In fact, both BreitBurn Energy Partners and Vanguard Natural Resources (NASDAQ: VNR) aim to drop their ratios to about 3.0 times. While LINN Energy would like to reduce its leverage ratio, its current focus is on strengthening its distribution and growing production.

Investor takeaway
While LINN Energy's debt load and debt ratio are on the higher end, neither should scare investors. Over the next few years we actually should see that ratio come down as the company executes its plan to lower its decline rate and capital spending, which should increase cash flow. Furthermore, the company's strategic alternatives in the Midland Basin should add cash flowing assets to LINN's portfolio, which would positively impact the debt metrics and balance sheet. That's why I'm not worried about LINN's debt.