A month later, and America's GDP figures don't look quite so bad. The Bureau of Economic Analysis this morning released its third and final update for fourth-quarter U.S. gross domestic producing, bumping the country's annualized GDP growth rate up to 2.6% from the 2.4% reported last month. That's well below the previous quarter's 4.1% growth rate, but it's above the average GDP growth rate of 2.2% seen over the past three years. It's not great, but it's not terrible.

Major indices reacted with some disappointment, as the Dow Jones Industrial Average ( ^DJI -1.86% ) dropped quickly into the red after the opening bell, only to rebound on stronger initial jobless claims -- the 311,000 new claims recorded last week was the best figure in four months. Economists had expected the BEA to boost its GDP estimate to 2.7%, but a large downward revision in private domestic investment (from 4.5% to 2.5%) -- primarily affected by reduced spending on nonresidential structures (from 7.3% to 5.7%) -- offset a revised rise in personal consumption spending from 2.6% to 3.3%.

Let's look at the various gears and cogs of America's GDP now: 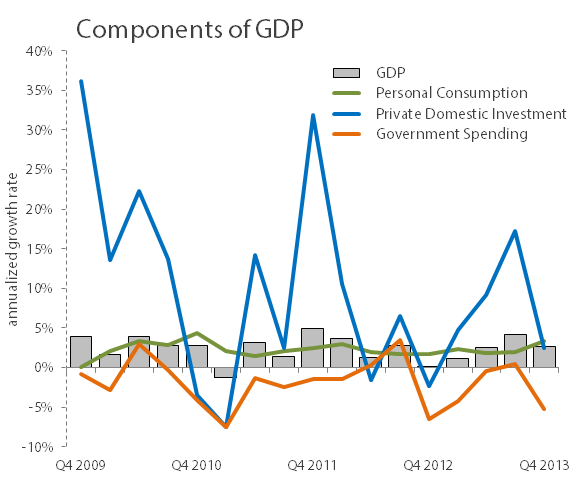 As you can see, government spending continues to drag on GDP growth, but personal consumption spending outpaced the erratic swings in private domestic investment (structures and durable equipment) for only the third time since 2011. These switches only tend to occur when investments dip significantly. Drops are more likely to happen when businesses tighten their belts on construction, but this past quarter, lower spending on residences worked hand in hand with reduced business construction spending to push overall investments down: 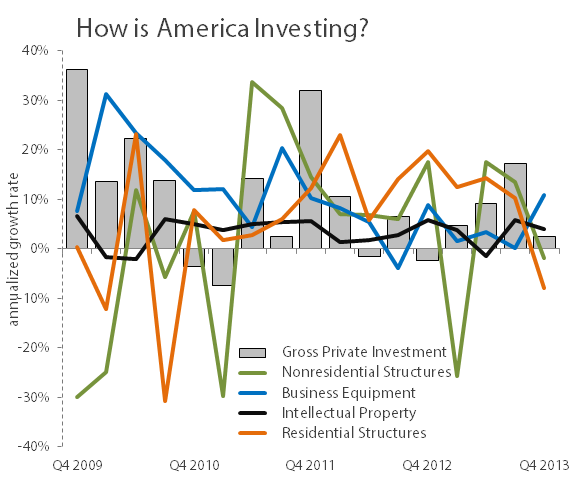 This chart shows that growth of investment in residential structures is weaker than it's been since late 2010. This has been blamed on a bad winter, but keep in mind that the worst of this weather has largely taken place in 2014, so we might be in for another lousy quarter on this front. Nonresidential structure investment growth also tends to bottom out in the first quarter -- the two big dips on the chart above that took place following a return to growth were the first quarters of 2011 and 2013.

However, personal consumption was an important part of this quarterly upgrade. Key to that boost was a growth in U.S. services spending, which grew at its fastest rate in nearly a decade. You'd have to go back to 2005 to find a higher growth rate in services-related spending than the 3.5% recorded in the fourth quarter. This rise offsets a weakening in durable-goods spending, which is notoriously erratic: 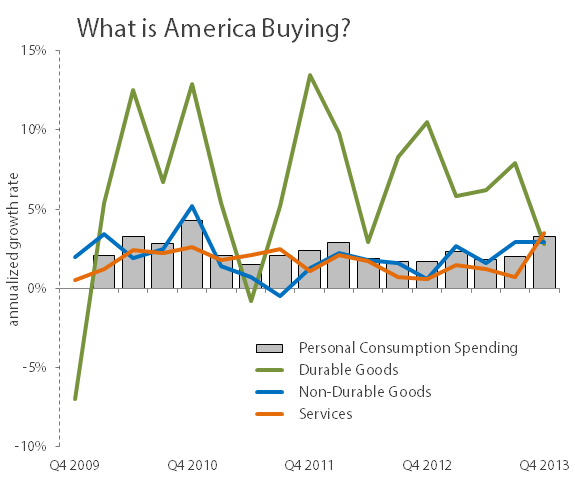 Government spending at all levels continues to drag on the economy, but there is one sign of improvement, as the overall figure was revised from a decline of 5.6% to a slightly smaller decline of 5.2%. This change was almost exclusively due to state and local governments, which had their spending growth rate revised from a 0.5% decline to breakeven, making this the third consecutive quarter now without a decline in state and local government spending: 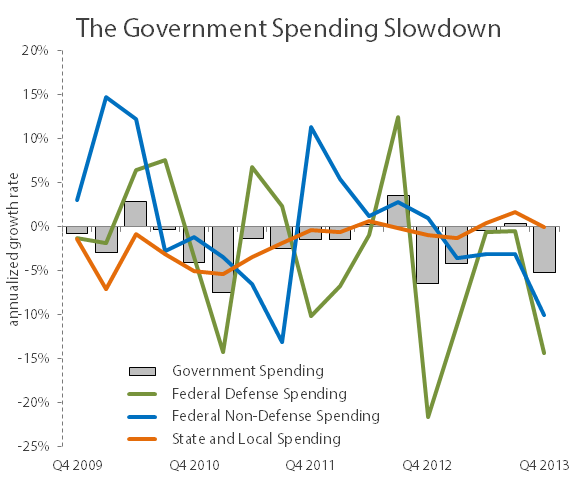 Finally, let's take a look at how all of these major components actually contributed to GDP this quarter (and in prior quarters): 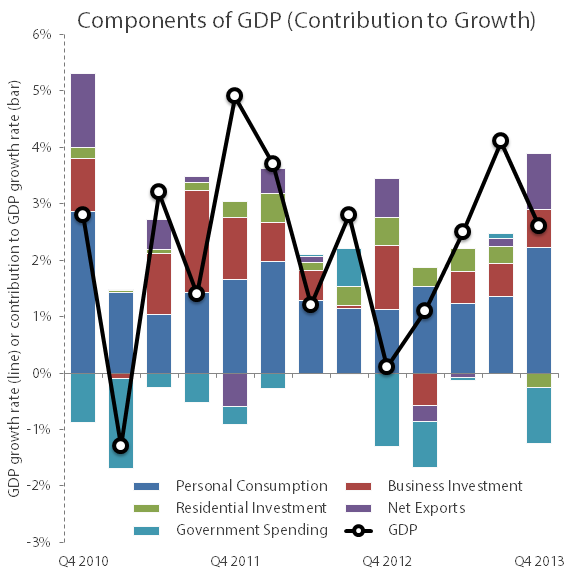 Personal consumption continues to be a major driver of the U.S. economy, and it was more important than it's been in years during the fourth quarter. It shouldn't be surprising that some of the Dow's most consumer-dependent components -- particularly Coca-Cola ( KO -3.90% ), Wal-Mart ( WMT -1.40% ), Nike ( NKE -0.37% ), and McDonald's ( MCD -2.28% ) -- are among the index's best performers today, as they rely on Americans in large part for their continued profitability and growth.