The market sell-off has taken a lot of previous high-flyers lower, including shares in health care IT provider Veeva Systems (NYSE:VEEV)(NYSE:VEEV)Veeva was one of the hottest companies to IPO last fall, with shares closing at more than $37 on its first day of trading. That was 85% higher than its IPO price.

However, after peaking at nearly $50, shares have been sliding steadily since. Given Veeva has just hit a new post-IPO low, are shares finally signaling to investors that it's time to buy? 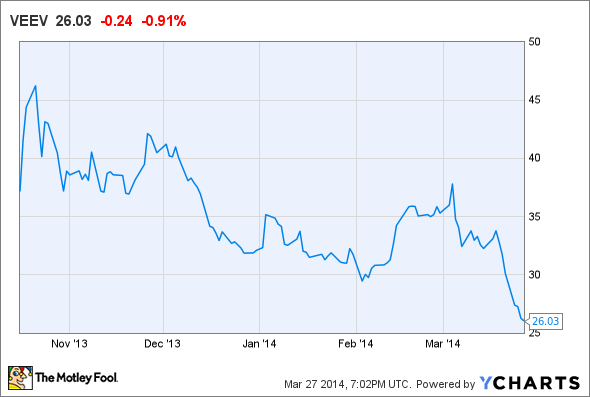 Bayer, Gilead, and Merck are among those using Veeva's customer relationship software to better target and serve prescribing physicians. Importantly, none of Veeva's 198 life sciences customers' accounts for more than 10% of sales, so while the company is tied to the health care sector; it's not reliant on the success of any one particular player.

Veeva's CRM software is built on the backbone of salesforce.com's (NYSE:CRM) popular web based CRM system thanks to a deal that grants Veeva the right to sell salesforce's Platform Unlimited Edition alongside its own solution, and restricts salesforce.com from competing against Veeva in the pharma and biotech industries.

As part of the arrangement, Veeva has to pay salesforce.com annual payments that, over time, will equal or exceed a minimum order commitment of $500 million by 2025. In fiscal 2014, Veeva's cost of subscription revenue totaled $36 million, up from $18 million the prior year, and payments to salesforce.com accounted for $14 million of that $18 million increase.

In addition to selling licenses to its modified CRM software, Veeva also hopes to generate future growth by cross-selling new software solutions, including Veeva Vault and Veeva Network. Both of those products are in-house proprietary cloud-based platforms that aren't tied to salesforce.com.

So is Veeva cheap or what?
Veeva's rapid growth has earned it a premium valuation similar to fast growing cloud based competitors. In other words, Veeva's shares don't come cheap.

Based on its $210 million in fiscal 2014 sales, its market cap is 15 times its full-year sales. If we consider Veeva's fiscal 2015 guidance of $270 to $275 million in revenue, the measure drops to about 12 times sales. Looking at it another way, Veeva's shares are trading at nearly 80 times the company's expected earnings next year.

For comparison, high-flying athenahealth (NASDAQ:ATHN), another cloud-based maker of health care IT solutions, has a market cap that is about 9 times larger than its $725 to $755 million in expected sales this year.

That said, Veeva looks like a bargain versus athenahealth in terms of price to earnings and profitability. The forward P/E ratio for athenahealth is 117, and athenahealth's operating margin is a puny 1.84%, while Veeva's is a much healthier 18.7%.

Fool-worthy final thoughts
Investors worried about Veeva's reliance on salesforce.com's platform probably shouldn't be. Veeva's founder and CEO Peter Gassner is the former senior vice president of technology at salesforce.com, suggesting he has strong ties that may insulate Veeva from risks tied to salesforce.com pulling the plug on their arrangement.

Despite Veeva's rapid sales growth, short-sellers remain unconvinced. At the end of February, they were sitting on a short position totaling nearly 55% of all Veeva's shares available for trading. That's a sizable bet that may suggest the potential for a short squeeze if Veeva over-delivers on estimates.

Overall, while Veeva isn't cheap relative to the market, an argument may be made that it's at least equally valued, and potentially more attractive, than athenahealth and salesforce.com. Of course, those companies are never confused with value stocks, and neither should Veeva be. But with $288 million on the books and no debt, speculative growth investors might consider the drop an intriguing opportunity to pick up shares.