In the age of Apple (NASDAQ:AAPL) iTunes and Pandora (NYSE:P), the value most consumers put on music is rapidly diminishing to zero. The music industry has fought an arduous battle against piracy, and has succumbed to lowering the cost of music through downloads and streaming options. While I'm a strong proponent of the music industry embracing technology to facilitate distribution, I admit it's not the only solution to prevent a decline in music revenue.

The greatest rap group in history, the Wu-Tang Clan, are taking the exact opposite approach. Their upcoming album, The Wu-Once Upon a Time in Shaolin, will be a limited edition release.

The group will sell the only copy of the album to one very lucky and very rich buyer.

The double album will come in this silver-and-nickel box. Source: Forbes

Wu-Tang Forever
The Wu's highest selling album, Wu-Tang Forever, is certified 4x Platinum, meaning it sold four million copies. Even if the legendary group could recreate the commercial success it had, the revenue would pale in comparison to the album sales.

Under the Copyright Act, the Copyright Royalty Board sets the going rate for reproduction (mechanical) licenses. That rate is currently set at $0.091 per song. That's the amount the music labels will pay the songwriters per song sale (physical and digital).

Once Upon a Time in Shaolin will have 31 songs, so the group would bring in about $2.82 per album sale if it went the traditional route. If it were to be as big a hit as Wu-Tang Forever, an unlikely scenario, the group would pocket a cool $11 million.

The group's album would be unlikely to receive much radio play, or receive a significant amount from other licensing opportunities due to the nature of the music. It's not exactly Top 40 material, although the group has had several top 10 Rap Chart hits.

There is, however, the additional revenue the group could get through streaming royalties, which are structured differently.

Streaming royalties are next to nothing
Pandora pays songwriters 1.85% of revenue as a royalty to ASCAP -- a rate slightly higher than terrestrial radio and recently upheld in court. Last year, that rate amounted to $11.8 million sent out to songwriters. By some estimates an artist's song would need to be played more than 250 times to equate to one song download on iTunes. 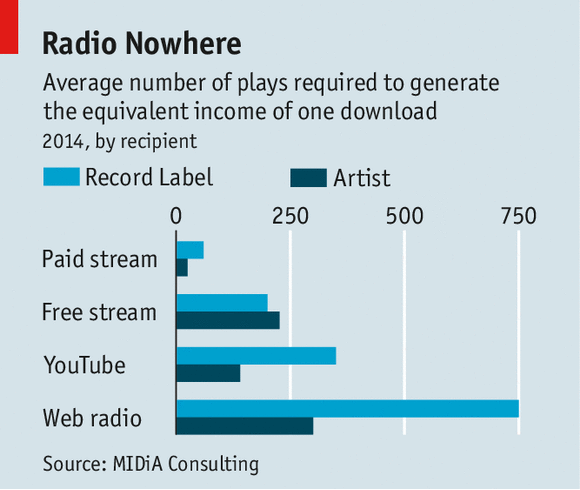 Let's say the album racks up about 1 billion song streams via YouTube, Pandora, Spotify, et al. (note, the most popular song on Spotify is Avicii's "Wake Me Up" with 200 million streams.) The group would be lucky to make another million dollars from streaming.

So, in the very best case scenario, the group could make $12 million from a traditional release of The Wu-Once Upon a Time in Shaolin.

How to monetize a single copy
For starters, Wu-Tang producers RZA and Cilvaringz are going to tour the album to various venues such as art museums and music festivals. Patrons will have the chance to see the one of a kind silver-and-nickel box that houses the double album and listen to the entire production on headphones.

Tickets are estimated to cost $30-$50. Depending on how much the venues charge for commision and security, the Wu could take home a good amount of money from the "tour" with no physical presence necessary.

More importantly, the creators believe the single copy of the album could fetch millions of dollars.

As a precedent, Jay-Z sold the rights to "leak" his Magna Carta Holy Grail to Samsung last year for $5 million. That was basically for an exclusive window; this is for exclusive rights. The buyer, a company or wealthy individual, is free to do what whatever it pleases with its -- the only -- copy. It could, in fact, turn out to be a worthwhile investment for someone.

'C.R.E.A.M.' ('Cash Rules Everything Around Me')
In an era when music's value is plummeting, Wu-Tang Clan are on a mission to reelevate it to the status of high art. Whether it will pay off in a larger pay day is unclear, but it will certainly be comparable.

Still, it's a smart financial move as the RZA clearly understands the time-value of money. The Wu will get paid up front in one lump sum instead of waiting for royalty checks. That just makes good financial sense.