The manufacturing giant Honeywell has nearly tripled the returns of the broader S&P 500 index over the past decade. Much of its performance can be attributed to the focused leadership of its CEO Dave Cote. Since taking the helm in 2002, Cote's focused on finding the right portfolio mix, the right people, and the right processes to differentiate from the competition and grow the top-line.

This year he spoke to all three of these issues in his latest letter to shareholders. He also outlined some ambitious plans for Honeywell's next five-year act. Here are some of the highlights from Honeywell's 2013 annual report, five-year projections, and shareholder letter.

1. Honeywell's raising the bar to $50 billion in revenue by 2018.
Cote talks frequently about the company's five-year plans and aggressive targets for growth. He obviously enjoys a challenge and dreams big about where the company can be in a decades time. And more often than not Cote and company deliver on their goals. The latest year, in fact, wraps up Honeywell's 2010 five-year plan in which it set a revenue target range of $41 to $45 billion. As of now, Honeywell expects to fall just shy of its target, with a midpoint estimate of $40.5 billion in 2014. 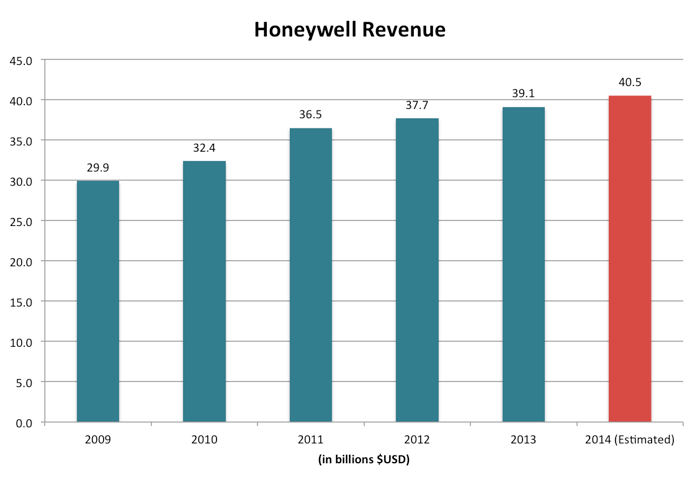 Considering the sluggish expansion in the global economy, that's an impressive performance. But Cote predicts the next half-decade will be even more impressive. In fact, Honeywell released a plan separately from its annual report that targets $50 billion in sales by 2018. For perspective, that top-line goal implies average revenue growth of roughly 4.7%, slightly higher than the average over the past five years.

For all intents and purposes, Honeywell's projections also conclude the U.S. economy will continue on a nine-year economic expansion. Overall, it's a highly optimistic forecast, but Honeywell has risen to the occasion in the past. Further, the company plans to deploy $10 billion for acquisitions over that timeframe, which is a step above its recent trend.

2. Culture continues to be top-of-mind in the manufacturing sector.
One of Honeywell's core strengths according to Cote cannot be measured with year-over-year metrics. Instead, it's the intangible aspect of company culture that he drives home in nearly every shareholder letter. I've pointed out the importance of a goal-oriented and accountable culture at Honeywell's competitor, General Electric, and I'll allow Cote's thoughts to echo that sentiment:

Culture is equally important to sustained performance. The ability to learn and evolve faster than our markets, to be a "Thinking Company," to recognize "The Trick Is in the Doing," to see the difference between "Compliance With Words" and "Compliance With Intent," the ability to accomplish "Two Seemingly Conflicting Goals at the Same Time," to achieve our quarterly targets while "Seed Planting" for quarters three years from now. Culture makes a difference ... and ours is hugely different from what it was.

The challenge for large companies in this day and age is to stay nimble and remain focused in spite of their sprawling operations and headcount. One key aspect of that is effective communication. Despite the somewhat cliche phrases, Honeywell's letters reflect candidly about its pitfalls and opportunities, which is refreshing for investors trying to make sense of a complex conglomerate.

3. The U.S. is by far the most important market, but Honeywell's workforce is predominantly overseas.
As of the end of 2013, Honeywell's segment revenues consisted of roughly 40% in international sales and 60% in sales to the United States. On the flipside, the employee breakdown is the complete reverse. Of its 131,000 employees, 80,000, or roughly 60%, are abroad and 51,000, or roughly 40%, are in the United States.

I found that anomaly surprising, but likely indicative of the regions in which Honeywell sees greater opportunity for gains in the years ahead. Honeywell needs to have a global footprint to compete, and of course labor costs are a critical component in choosing the geography of new facilities.

4. 2013 was a slow year on the M&A front, but expect it to step on the accelerator.
In 2013, Honeywell closed only three transactions in the merger and acquisition market, compared with a staggering 125 transactions in the decade prior. The company spent approximately $1.13 billion, but expects to deploy $10 billion plus over the next five years.

Obviously, there's some concern that Honeywell could overpay, as the current bull market presents frothy valuations, but strategic acquisitions will be an integral part of its growth strategy to reach the $50 billion revenue target in 2018. For perspective, Honeywell has tacked on a net of $4 billion in sales over the past decade through transactions.

5. Services are crucial to bolster profit margins.
Honeywell's segment margins grew 70 basis points during 2013 and the company aims to grow margins by 220 to 370 basis points over the next half-decade. That equates to roughly 3% in increased profitability, which would be no small feat.

One way Honeywell will get there is to emphasize higher-margin offerings like services and maintenance. For example, Honeywell's largest segment, automation and control systems, generates an operating profit margin of 15%. Not too shabby on the whole, but that metric is walloped by the 20% operating profit margin in aerospace. The key driver: a high services-to-product mix in aerospace of 40% to 60%. Automation and controls, on the contrary, has a 14%-to-86% services-to-product mix.

I've discussed the significance of services revenue -- because of its chunky margins -- at General Electric as well. In GE's industrial businesses, the razor-and-blade business model delivers predictable, ongoing revenue even after the sale of equipment. Further, it allows GE to undercut competition on the front-end.

Honeywell employs a similar tactic in aviation -- where it focuses on different plane sizes than GE -- because it is difficult for customers to switch vendors or find another company to maintain the products that Honeywell sells. Once these long-term relationships are in place, Honeywell has a sticky, high-margin business that outperforms its other segments from a profitability perspective.

So what's next for Honeywell's stock?
Honeywell delivered another outstanding year for investors given the economic environment in 2013. Operationally, Cote and company continue to pull the right levers to enhance profitability and differentiate from giant competitors like GE and United Technologies. While its ambitious forecast could stretch the company slightly, Honeywell's valuation does not seem overstretched currently at roughly 14 times forward earnings. In my opinion, Honeywell's recent momentum, 2% dividend yield, and hyper-focused leadership provide reason enough for investors to add shares to their portfolio.

Are you hunting for a dividend?
Studies show that that dividend-paying companies like Honeywell General Electric handily outperform their non-dividend-paying brethren. But knowing this is only half the battle. The other half is identifying which dividend stocks in particular are the best. To help you choose the cream of the crop, our top analysts put together a free list of nine high-yielding stocks for every income investor's portfolio. To learn the identity of these stocks instantly and for free, all you have to do is click here now.