Networking giant Cisco (NASDAQ:CSCO) has had a tough few quarters, with significant revenue declines caused by weakness in emerging markets and in sales to service providers. This weakness has caused the stock to remain well below the highs of last year, settling in around $21-$22 per share, and a dividend increase has pushed the yield up to 3.4%. Cisco is working through its current issues, and the company is investing in new areas like the cloud, causing earnings to decline in the short term. The short-term picture certainly looks bleak, but for long-term dividend investors, Cisco is one of the best choices in the technology sector.

How Cisco spends its cash flow
Cisco generates a lot of cash, and although profits have declined during the last couple of quarters, it doesn't change the picture very much for dividend investors. Cisco's dividend is fairly new, beginning in fiscal 2011, but it already has one of the highest yields of all the big technology companies.

A high yield needs to be coupled with the potential for dividend growth, and while earnings growth will be difficult in the short term, a low payout ratio gives Cisco's dividend room to grow. Here's how Cisco has spent its operating cash flow over the past five years: 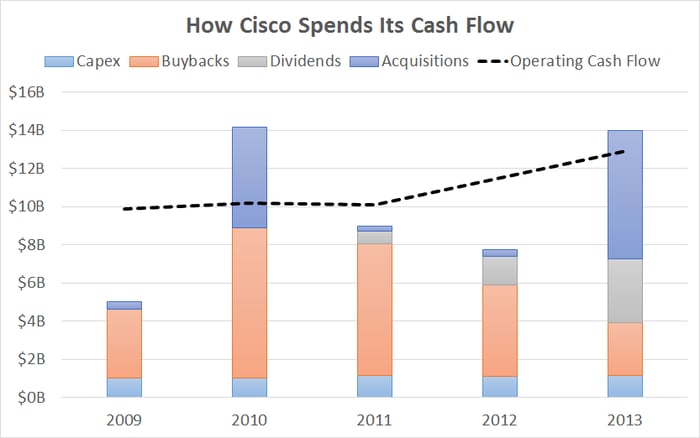 While Cisco does occasional spend a lot of money on acquisitions, the company has enough excess cash lying around to handle these costs. In fiscal 2013, capital expenditures, dividend payments, and buybacks collectively accounted for only about 56% of Cisco's operating cash flow, leaving plenty of room to increase the amount of cash returned to shareholders. Cisco has greatly increased its buyback activity during the second quarter of 2014, taking advantage of a depressed share price by spending $4 billion on buybacks, and the dividend was boosted by 12% in February, so the company is actively shifting more cash flow back to shareholders.

The dividend alone only took up about 26% of the operating cash flow in 2013, so even a sustained period of weak earnings won't threaten the current dividend. Capital expenditures will likely rise due to Cisco's recently announced $1 billion investment in the cloud. But even a doubling of the current level of capital expenditures leaves plenty of breathing room for Cisco.

Cisco enters the cloud
With companies like Microsoft (NASDAQ:MSFT), Amazon (NASDAQ:AMZN), and Google (NASDAQ:GOOGL) already having a big presence in the cloud, Cisco seems a bit late to the party. But the cloud is still a young technology, and if Cisco's vision of the "Internet of Everything" comes true, the number of devices connected to the Internet is going to explode. Cisco wants its global Intercloud, hosted by both Cisco and its partners, to accelerate this vision and provide the vast, secure cloud infrastructure needed to make it a reality.

Competition is fierce, however, and Cisco has its work cut out for it. Amazon is the current leader in cloud computing, and its near-constant price-cutting has driven down costs and put pressure on the competition. Microsoft has so far matched all of Amazon's price cuts with its Azure cloud service, and the most recent price cut by Amazon will likely be no exception. This came days after Google announced aggressive price cuts for its own cloud computing services, with certain items seeing cuts of more than 80%.

Cisco needs to be able to differentiate its cloud services on more than just price in order to compete, and the company hopes that its partner-based many-cloud model, along with a focus on security, will help it turn this $1 billion investment into a major business. In the short term, this will certainly be a drain on Cisco's profits, but the potential in the long term is enormous.

The bottom line
Although Cisco is currently going through a rough patch, the company's dividend is both safe and capable of growing, even if earnings remain weak. Cisco's competitive advantages in its core businesses should not be underestimated, and neither should the potential of Cisco's Intercloud. Thanks to the market's reaction to Cisco's short-term weakness, the stock has been trading at depressed levels for quite a while, offering an opportunity for long-term investors.