The first quarter has not been a friendly one to the nation's largest auto manufacturer, General Motors (NYSE:GM). But the company's actions in the past few days may be the biggest catalyst for consumers to think negatively of GM.

Recall blues
For various reasons, faulty ignition switches in a number of GM vehicle models can be jostled out of the "run" position and into "accessory" or "off," which can disable power steering, power brakes, and airbags. Needless to say, its a dangerous situation for drivers -- more than 30 accidents and 12 deaths have been linked to the safety hazard. But he recall of over a million vehicles for faulty ignition switched is old news now.

Even the recent announcement from General Motors that it's expanding the recall to include newer model years isn't terribly concerning, since the company is taking a precautionary stance. The expansion is due to ignition switches sold to parts stores and dealer repair shops that may have been used on the newer vehicles during repairs.

The company has announced that replacement ignition switches will be available starting on April 7 for all model years of its Chevrolet Cobalt, HHR, Pontiac G5, Solstice and Saturn Ion and Sky, with all vehicles repaired by October of this year.

Customers are urged to follow the following instructions for the recall process: 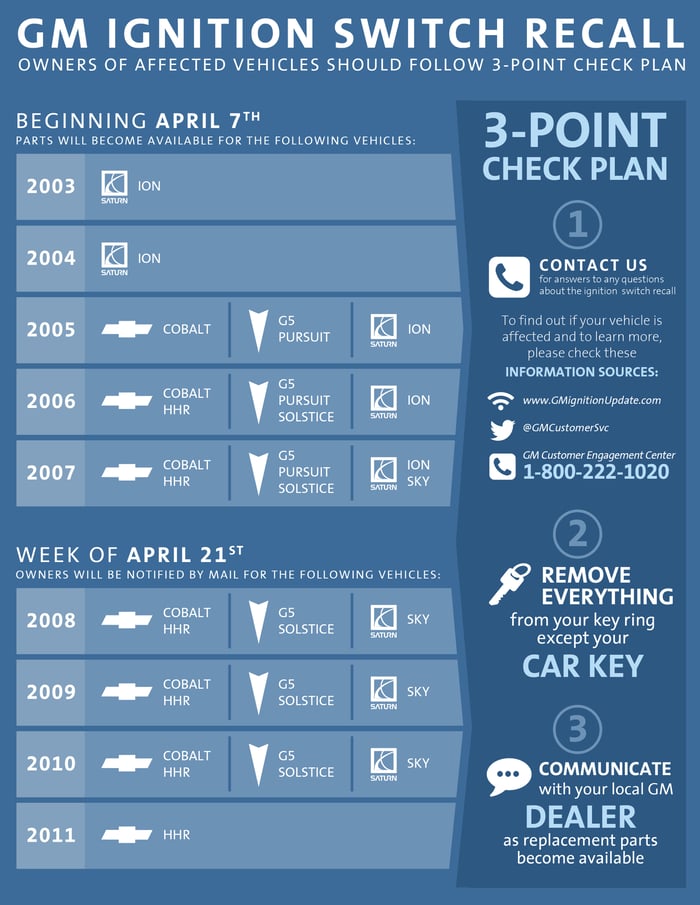 With the company taking huge steps to try to assuage customer concerns, including posting videos of CEO Mary Barra answering questions about the recall, one act may have just undercut any progress GM has made in rebuilding consumer confidence.

Cease and desist
On Friday, GM dealers received a stop-sale order from the manufacturer for the 2013 and 2014 Chevy Cruze, halting all sales of the vehicle. Though it's not uncommon for an automaker to halt sales if a safety concern needs to be fixed, General Motors omitted any information on why the stop-sale was necessary.

While dealers expect more news on the order early in the week, the lack of details may be enough to reinforce customer concerns about all GM vehicles. Though the company has assured consumers that the Cruzes that have already been sold are safe, there's little information for drivers to use to reassure themselves that the automaker is telling the whole story.

The biggest hit
There's no doubt that General Motors is in for a long run with the ignition switch recall -- not only with the actual repairs, but with and subsequent lawsuits and possible criminal investigations.

While safety concerns about any automaker's vehicles can be a business killer, the biggest problem with the GM recall debacle is the company's withholding of important information. First, the company takes 10 years to disclose the ignition switch problem, resulting in more than 2 million vehicles in question. Now, two current-year models of a popular vehicle are suspect.

Reputation counts for a lot within the auto industry, and with the recent stop-sale order lacking any information GM's may be taking another hit. But giving customers and investors a full weekend (or more) to hypothesize about the Cruze's problems, General Motors has really shot itself in the foot.